John Kuriawa and I met up at the "O" at 7:30a. He drove down from Saverna Park for his 1st shot at the "O". He's a regular at Fletcher's but he wanted to see some new water. Google his name and you will find some of his shad presentations.

Immediately, I went up to my favorite area and we started slinging shad darts. It took a few minutes and I got the 1st two on... 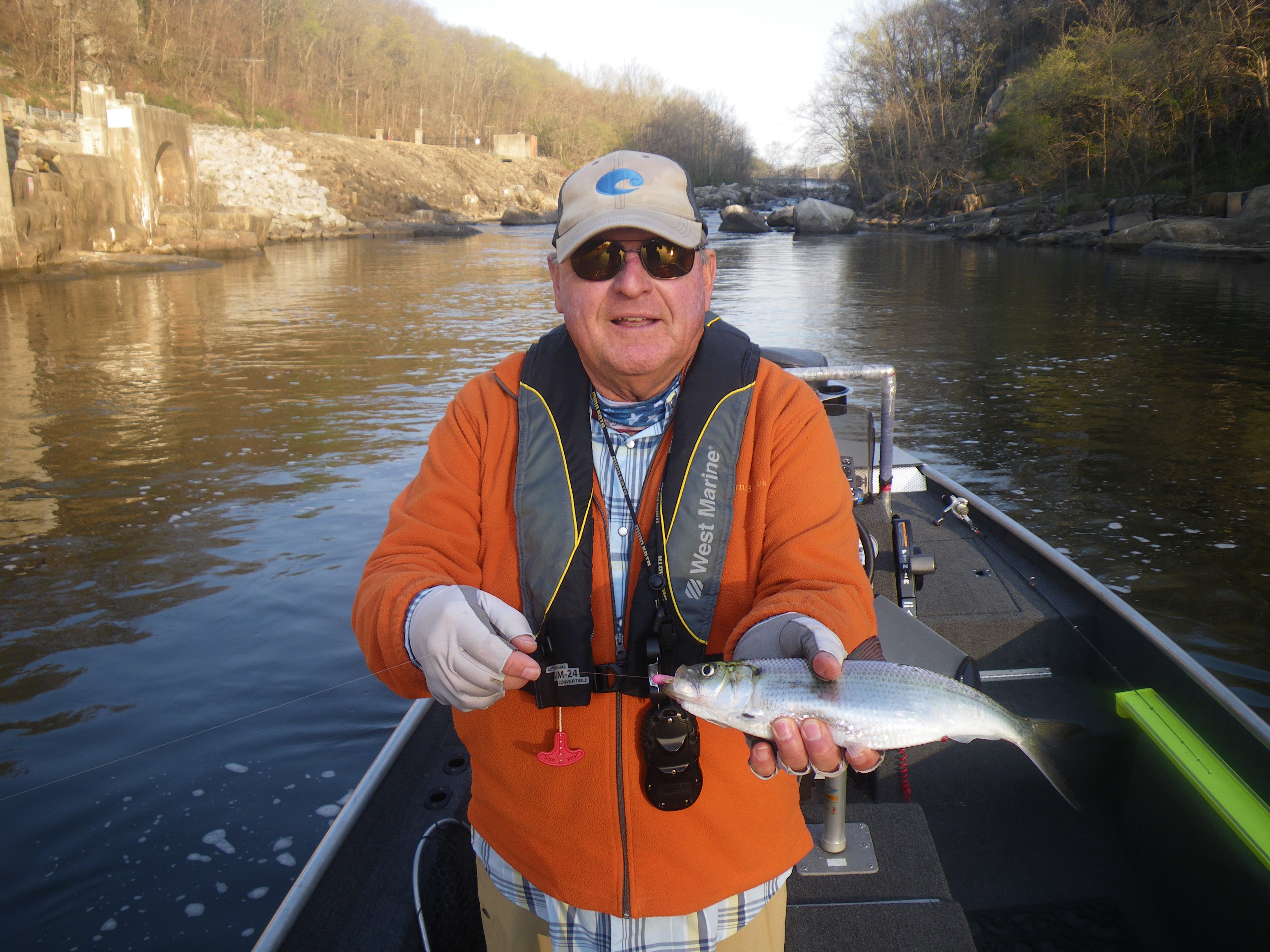 ...but we could not buy another bite so we moved down a bit. I was not gonna be stubborn today.

Don and Dave were in their named spot and were catching a few. We decide to camp out in a corner (under the overhead wires) and we started catching with John catching his 1st "O" shad! 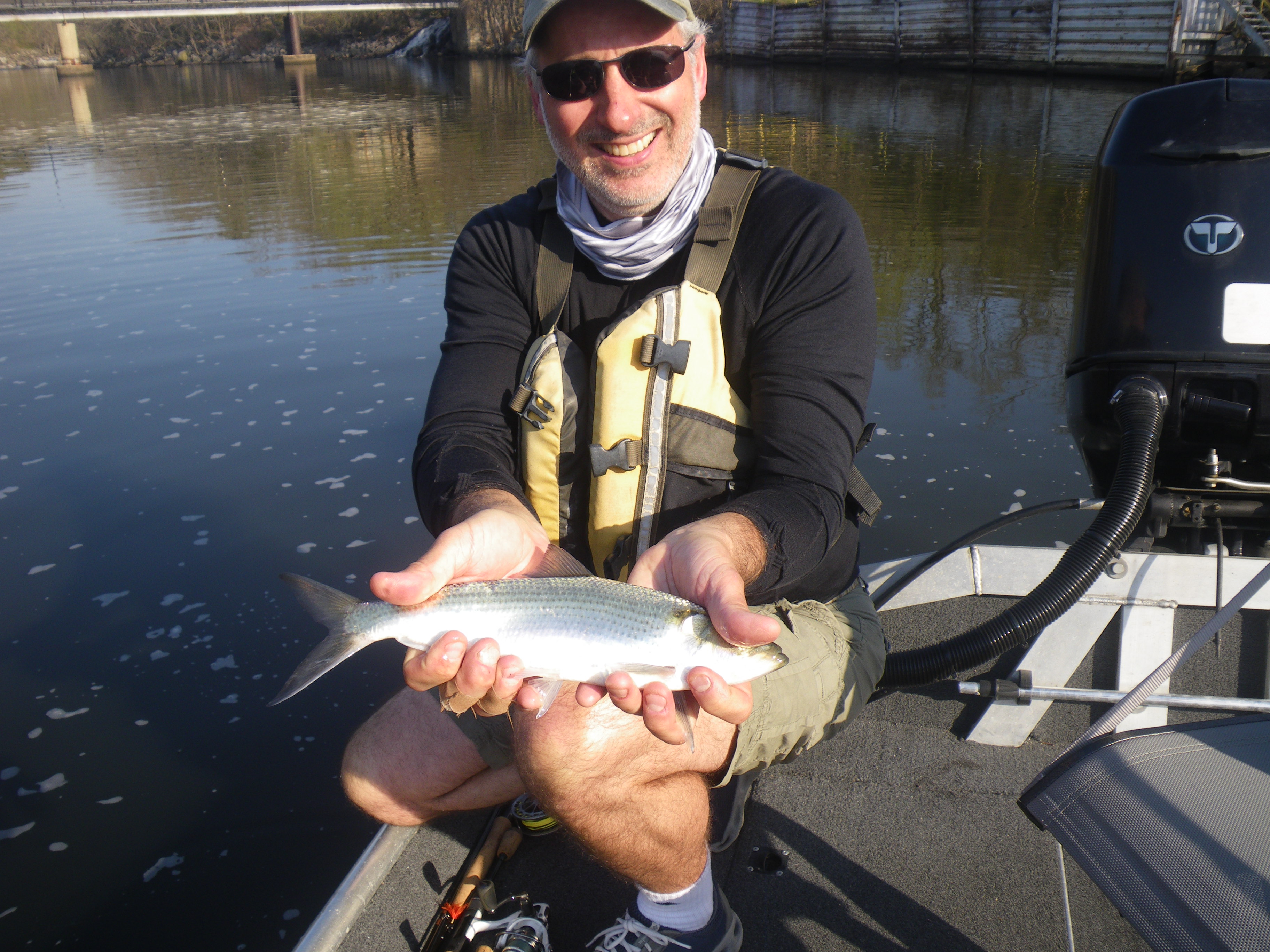 We started catching a few including this double! 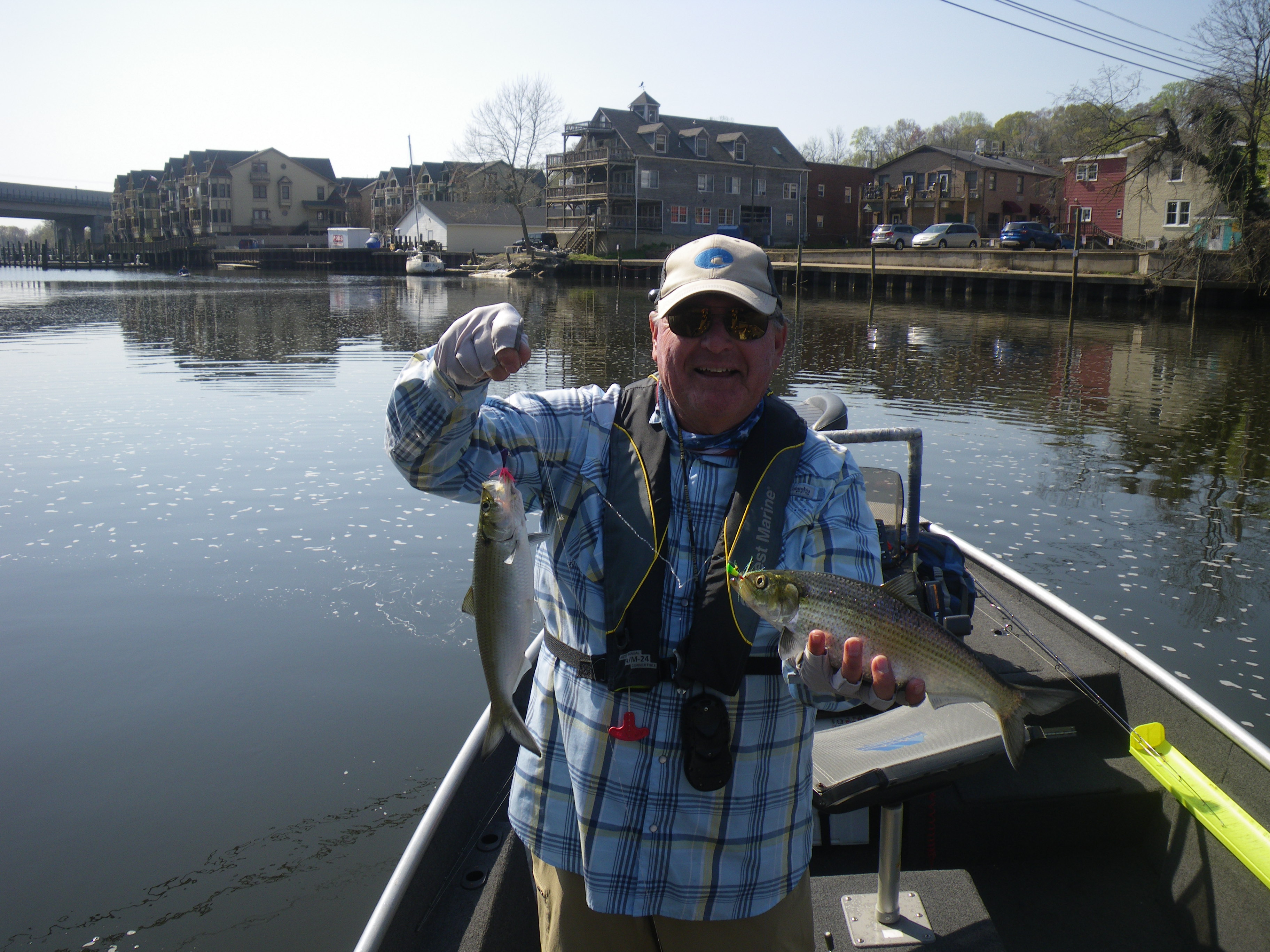 Early on, I was leading the count  and we were doing OK but I would call it slow. e had a long low tide and we probably went an hour without a hit.

We then saw John and his grandson, Emerson, who had never caught a shad. I am sure we will get a report.

As it was slow,  decided to go back up to my favorite spot. As we passed Don and Dave, they were still picking at them. I think they finished with 51...but they NEVER moved from their spot except to retrieve a lure that Dave had lost while bank fishing a few days back.

As before, we got no bites. Then I heard a fella call out my name and he recognized me from PRSC. He was struggling because he was losing all of his jigs. I gave him a handful of mine and John coached him up a little. More on this later.

We decided to get back down river and the overhead cables were good to us. We got to 18-16, John's favor. And then he caught one and I caught a nice one! 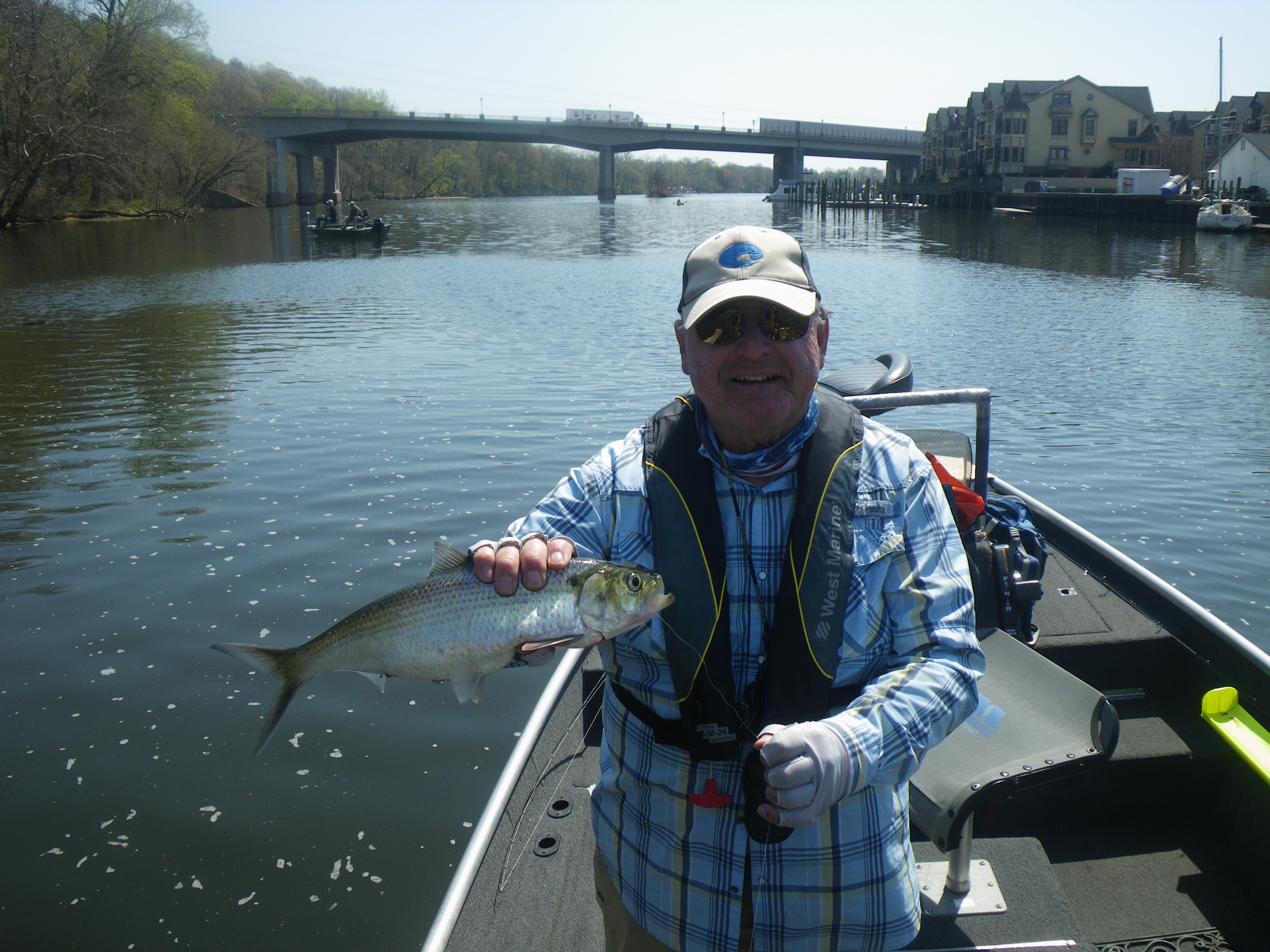 I then commented that John had not yet caught a double, nor had we caught a fish at the same time. I swear, on the next cast, John gets a double and I catch one simultaneously! 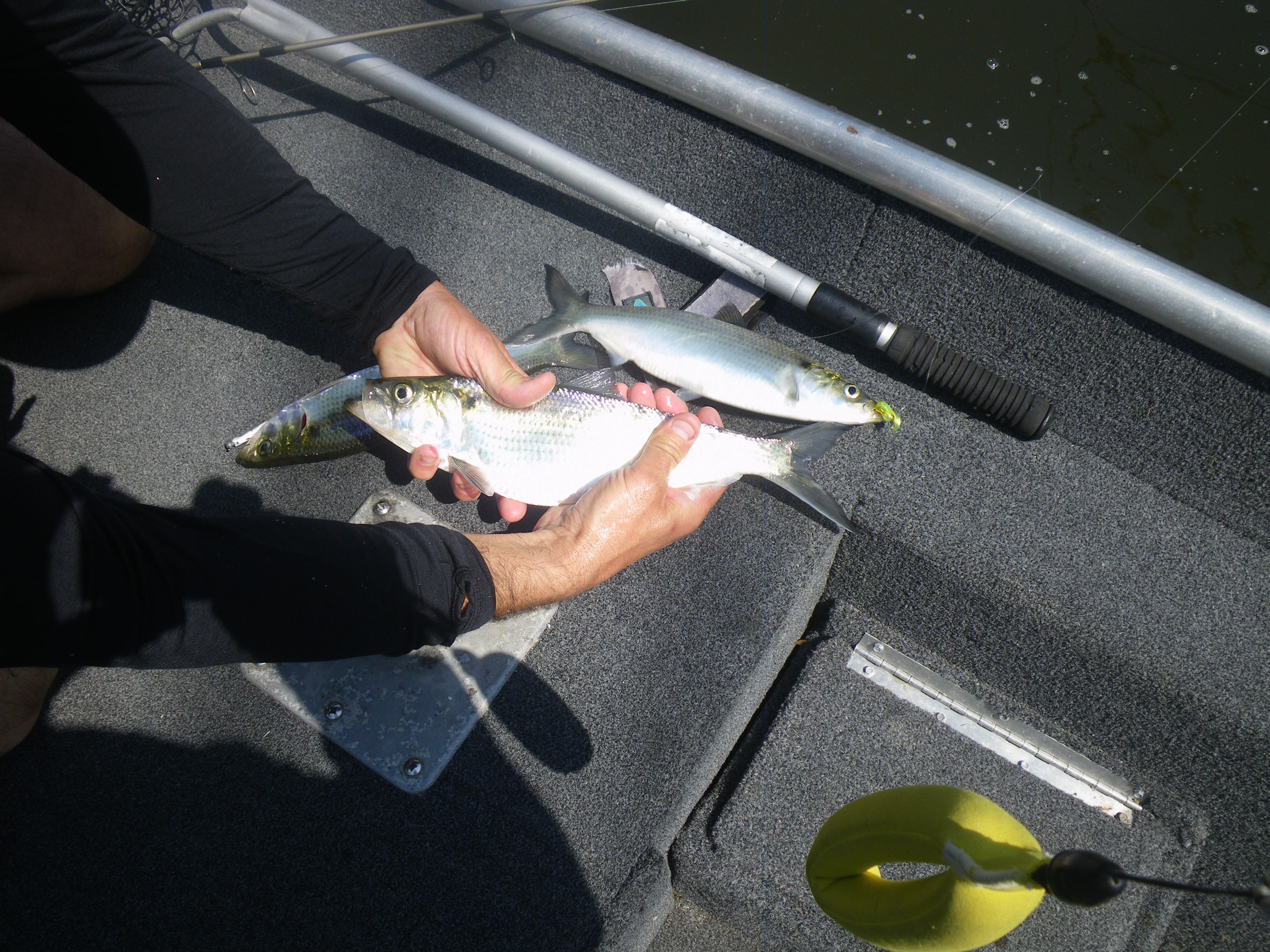 He started putting some distance on me and at the end, he finished with 28 to my 19. We tried to get to 50 but it was not to be.

When we had the last run, the tide was coming in nicely. Then, the wind shifted down river and ZIPPO!

Right before we left, I told my friend on the yak to move to the middle, throw the darts long and let them hit bottom and then to make a few jerks. All of the sudden, we see him with a fish on!

Well, it was his 1st shad and he came over to say thanks. It was literally his last cast before he had to leave as he was already late in getting back. All is good in the world today!

As we came back to the ramp, we had an "Oh, Oh" moment. Earlier, we had heard some emergency equipment commotion at the ramp but we could not see what the deal was. As we approached the ramp, a very nice lady from the park came over and was very apologetic but said we couldn't use the motor to retrieve my boat. John and I conferred and came up with a plan. We brought the boat in by hand and all was good. John got a little wet but he was prepared.

This is what the problem was. 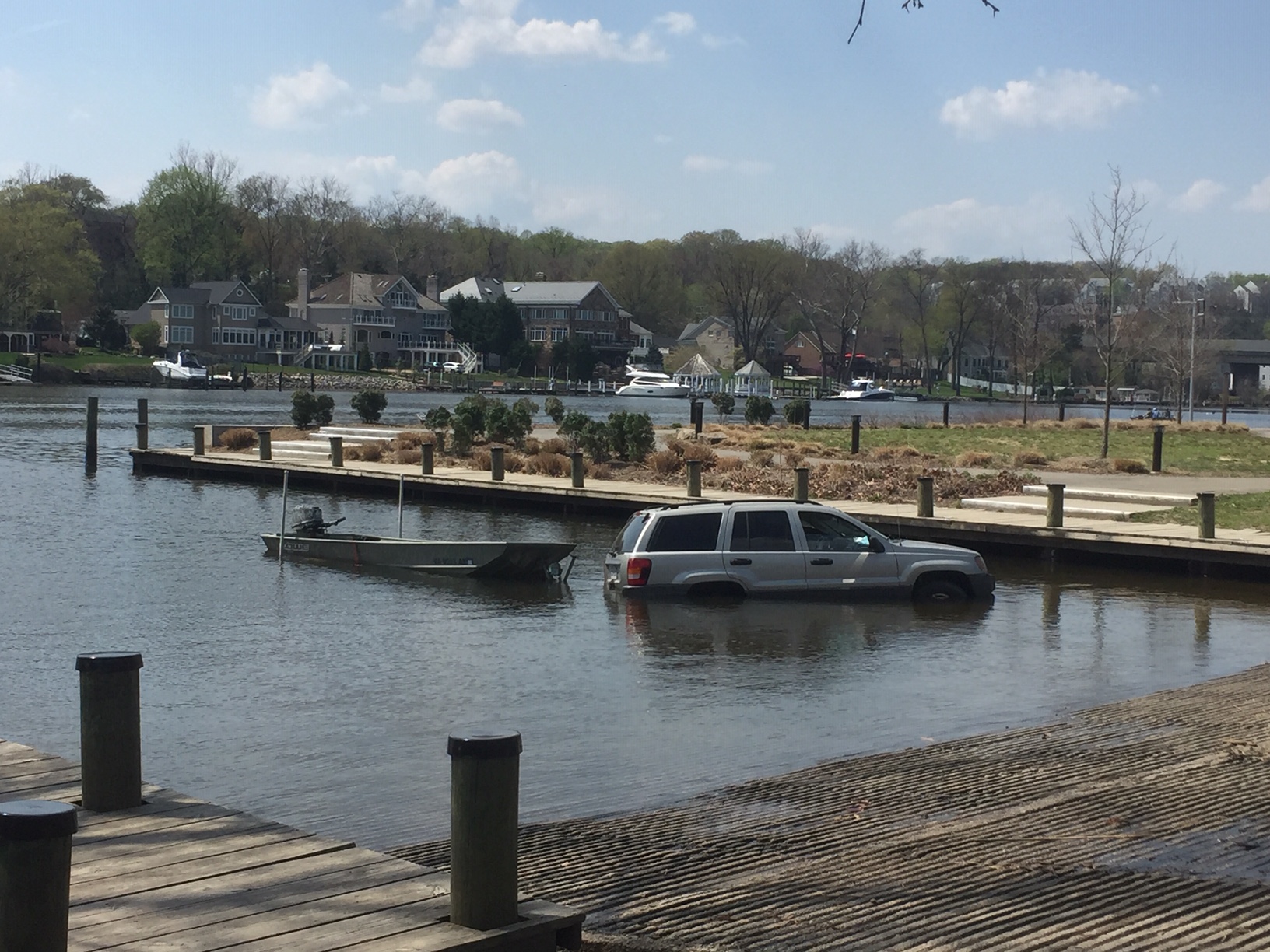 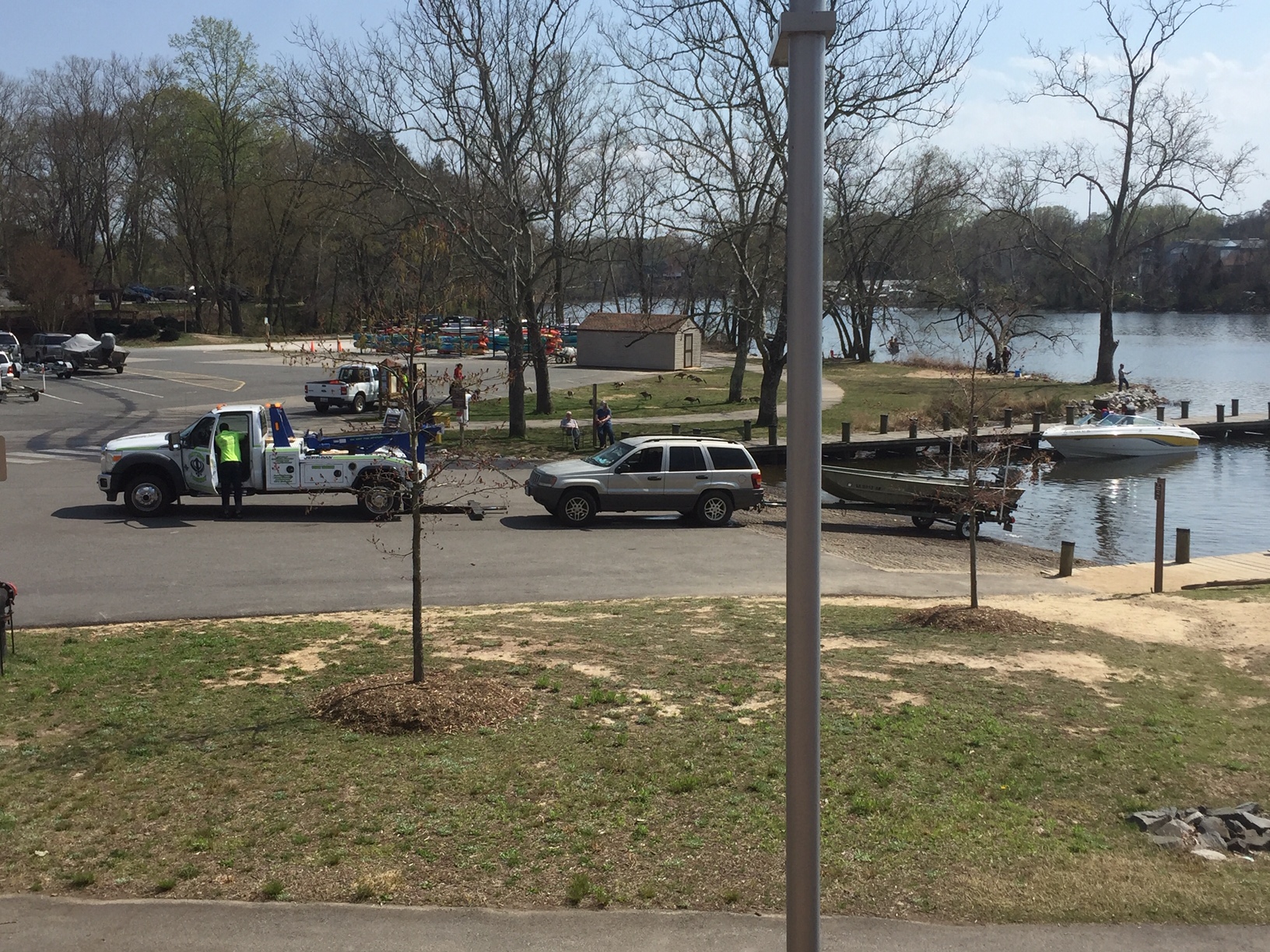 A very elderly gentleman got crossed up and ended up in the brink. He was lucky that the tide was not full on yet or it could have been a very different recovery. Lucky for him, there were lots of folks around to help him get out of his vehicle. He walked using a cane. Bummer for sure!

You can see him (white shirt) sitting by a pole next to a woman (blue shirt) in the 2nd pic.

We ended the day with another great lunch from Brickmaker's Cafe.

Edit to add: If I remember correctly, we started the day with water temps at 53df and ended at almost 59df.

2nd edit to add: I did hook into something big while up in the upper section. He popped off after a brief battle but we never saw it. Carp or a kittie was the guess.

Good day to be out and you guys caught some nice fish!  That is a heck of a mishap.  Glad the guy made it out ok, but I bet he was bummed!

Thanks for a great day Ernie!  I'll dig deep into the archives to retrieve some new ideas for the next O venture, in case those hyper hickories decide to be finicky again....

Sad to see the ramp problem for the elderly gent.

Do you use an anchor or spotlock Ernie?

Do you use an anchor or spotlock Ernie?

Sad to see the ramp problem for the elderly gent.

Agreed...I felt terrible for him because this could be the end of his boating. Thankfully, many people at the ramp helped out. The satff at the park made sure he was OK and was checked out by the EMT's.