It was a sleep in day due to the Nats win the night before...I stayed up for all the interviews! What a series!!

We were fishing before 9a... 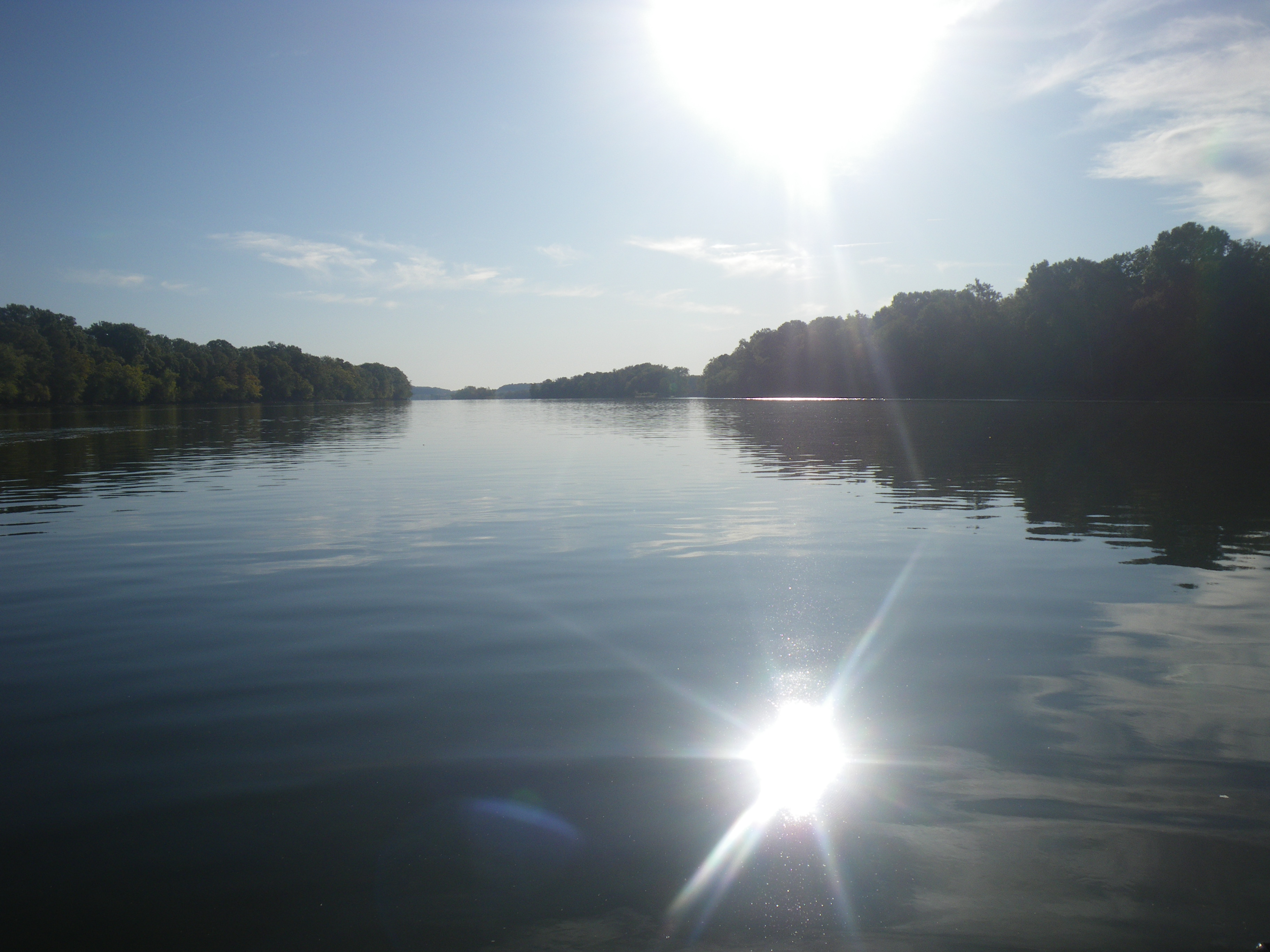 We decided to fish deep holes close by but we could not get bit.

After a while, we were going to move when John got hit and declared he had a big carp on. No, it was a big smallie. Nope, it's a big catfish. Heck, it must be a big LMB...finally, it was back to a smallie until I saw the teeth!!

This was a big walleye that did not fit in my net. The moment the hook came out of his mouth, he boomeranged out of the net. No picture but if he was 25", I would be lying. It was a beast!! It was caught on a smoky colored curly tail grub. What a fish!

After we calmed down, we ran up river to try something different.

John got the smallie skunk off quickly... 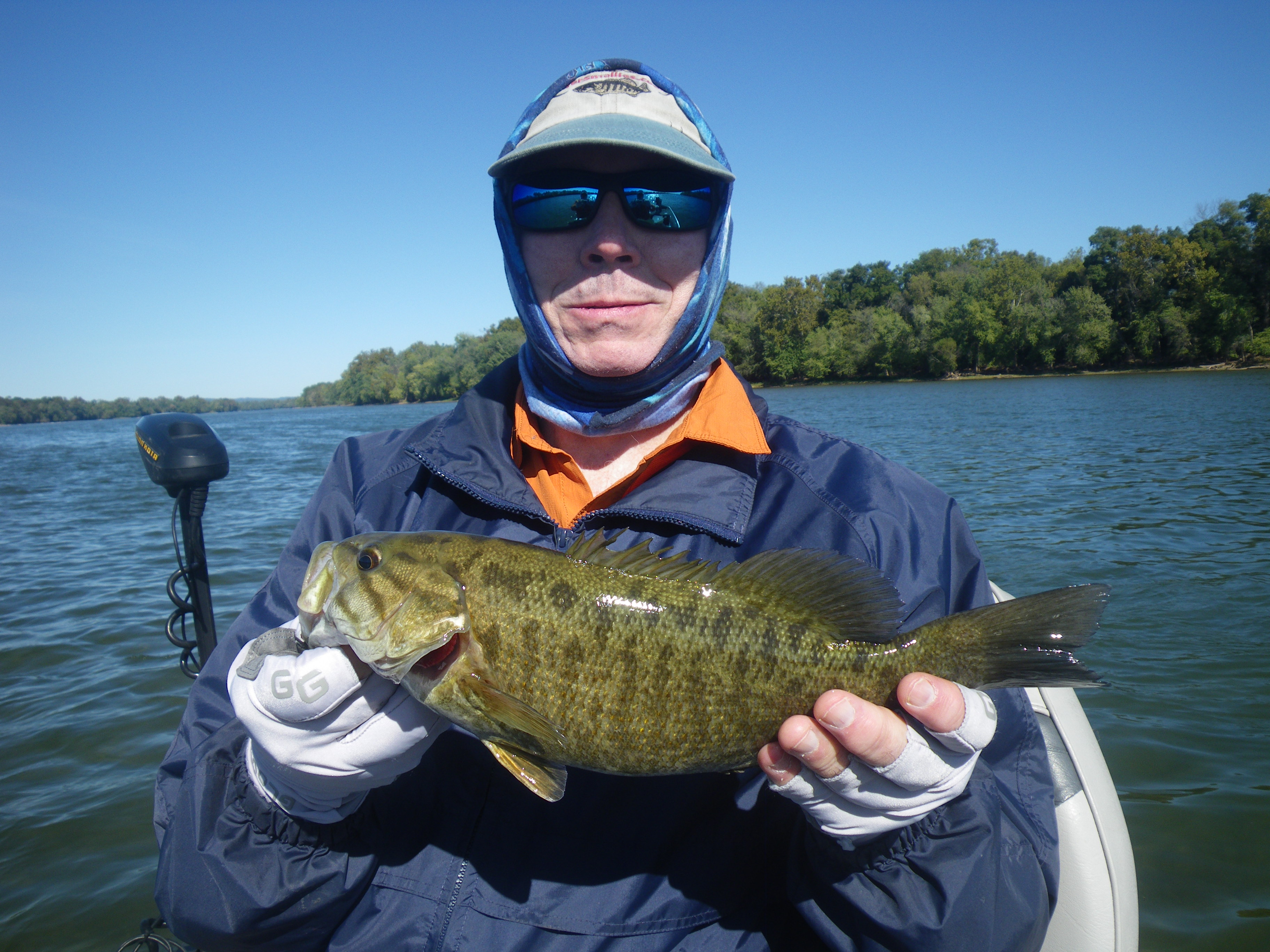 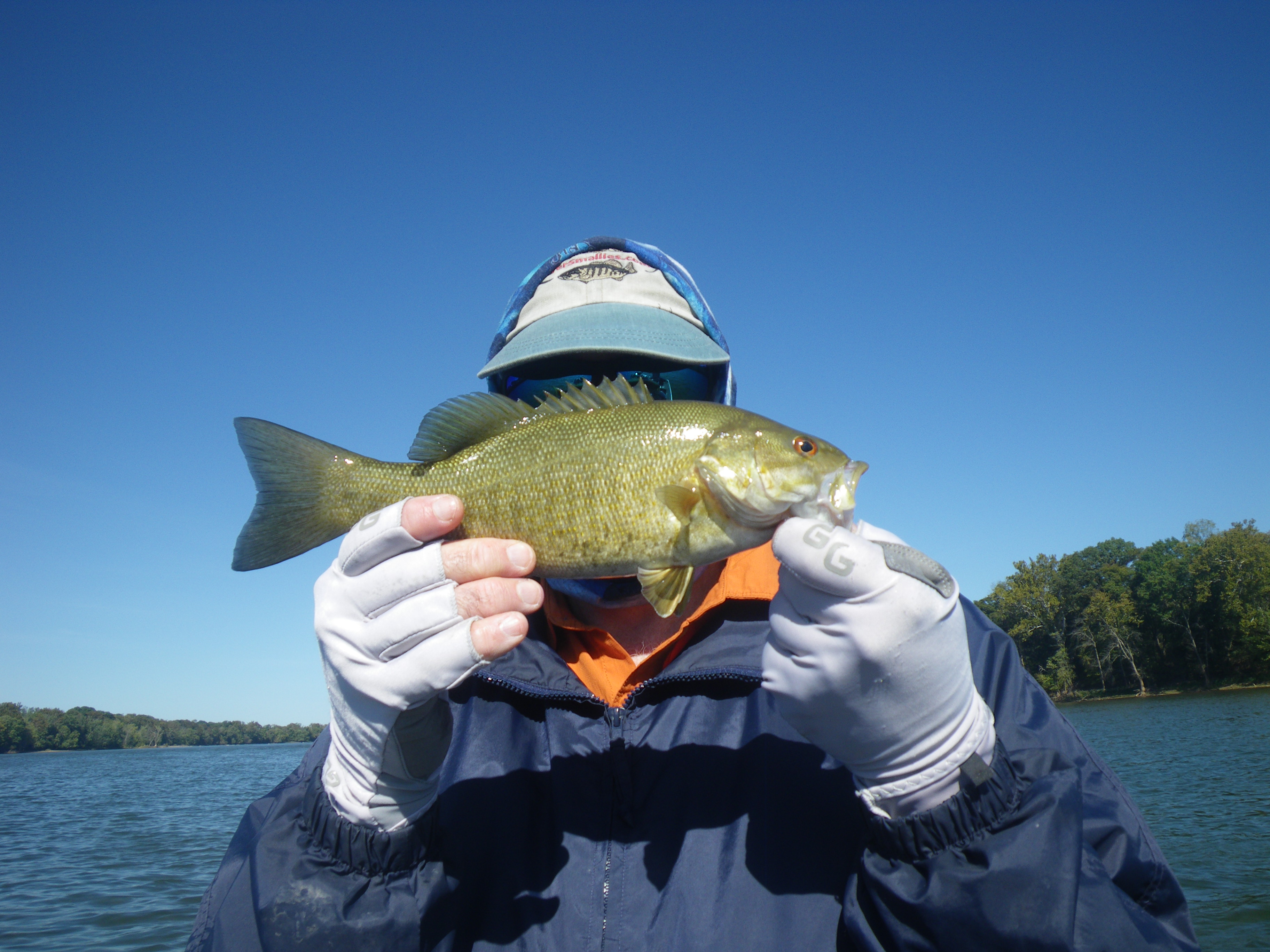 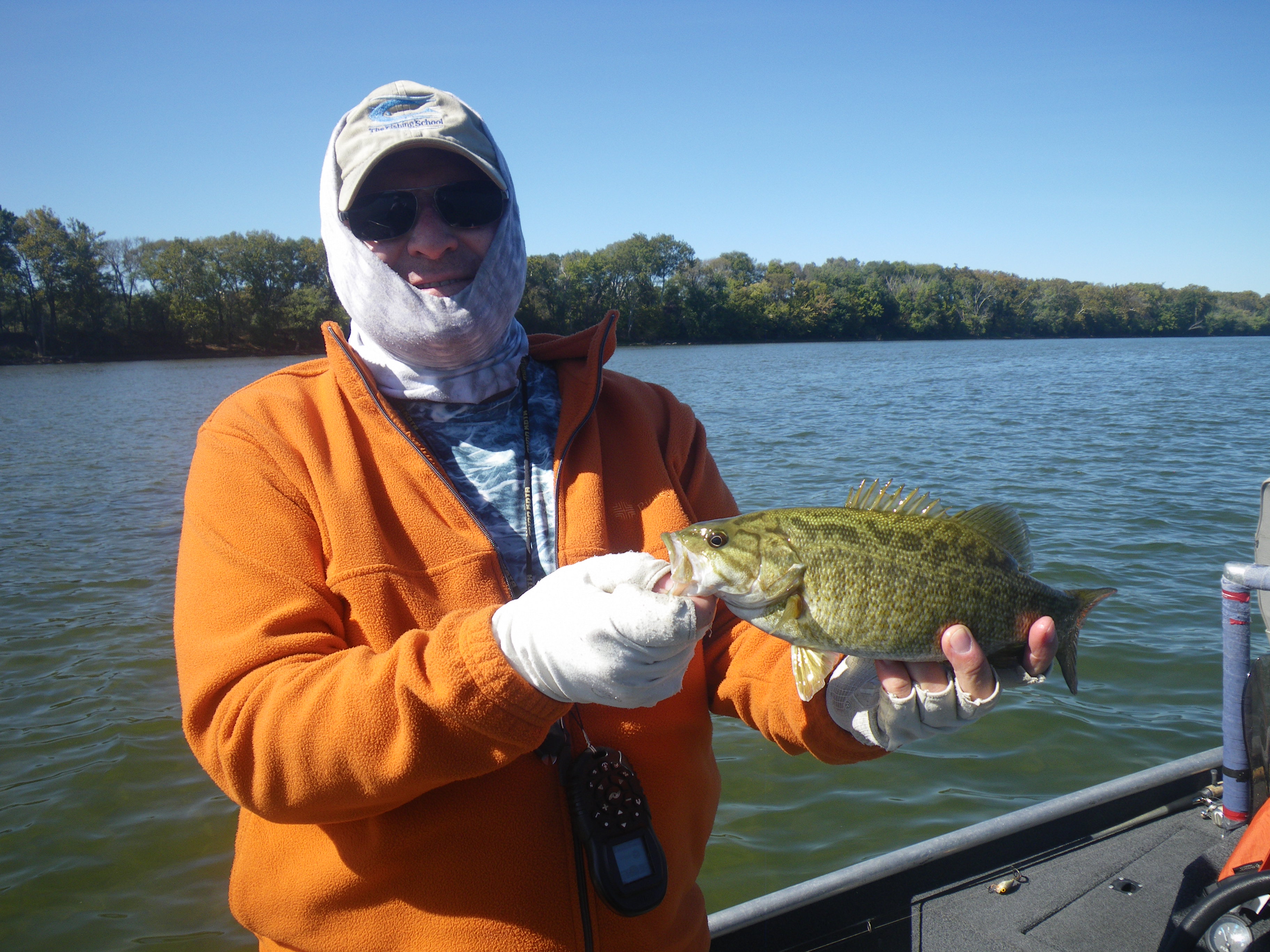 Some of these fish had some beautiful colors!

After a long cast, I got slammed and had a great fight with this 17"er! 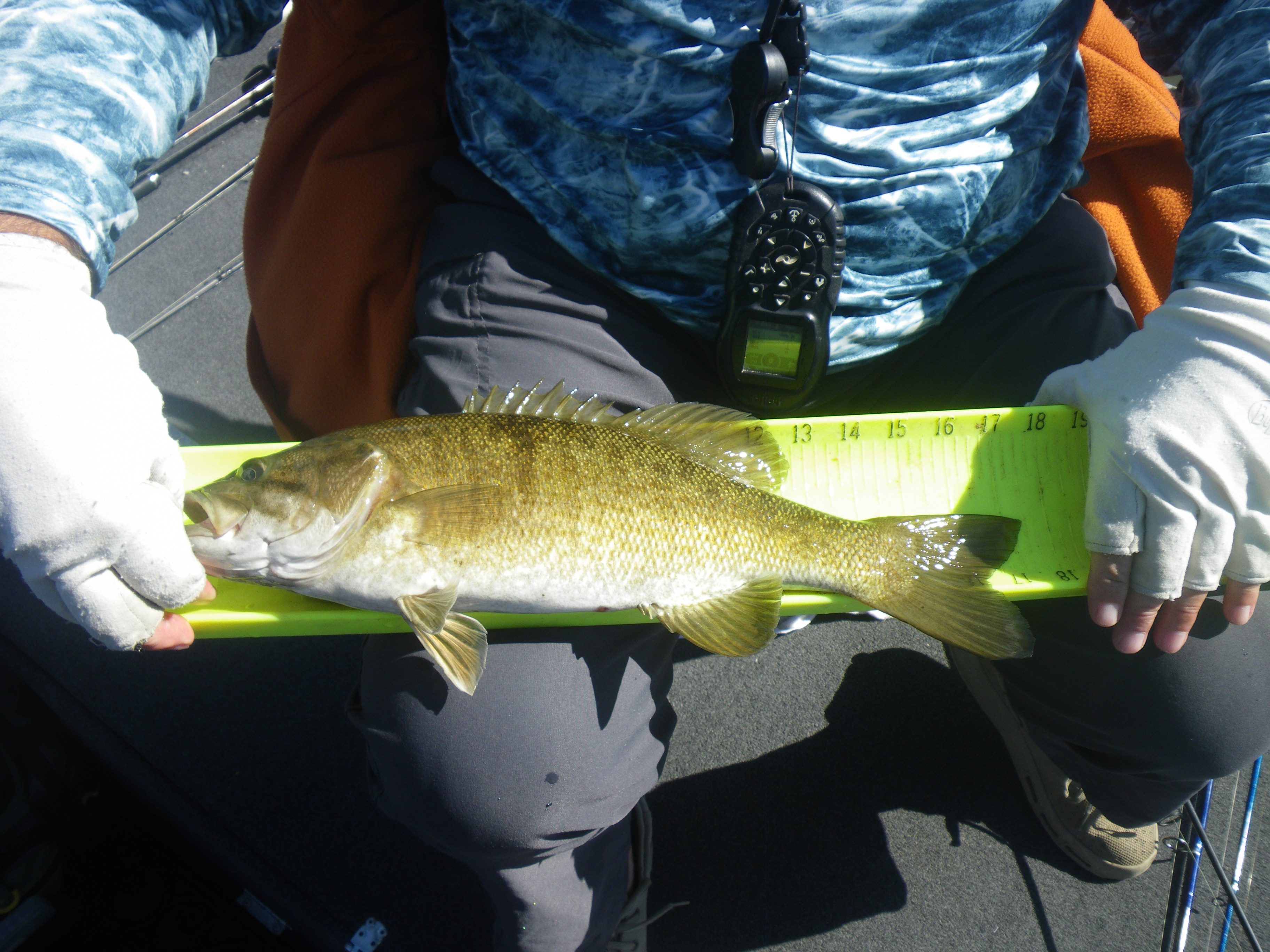 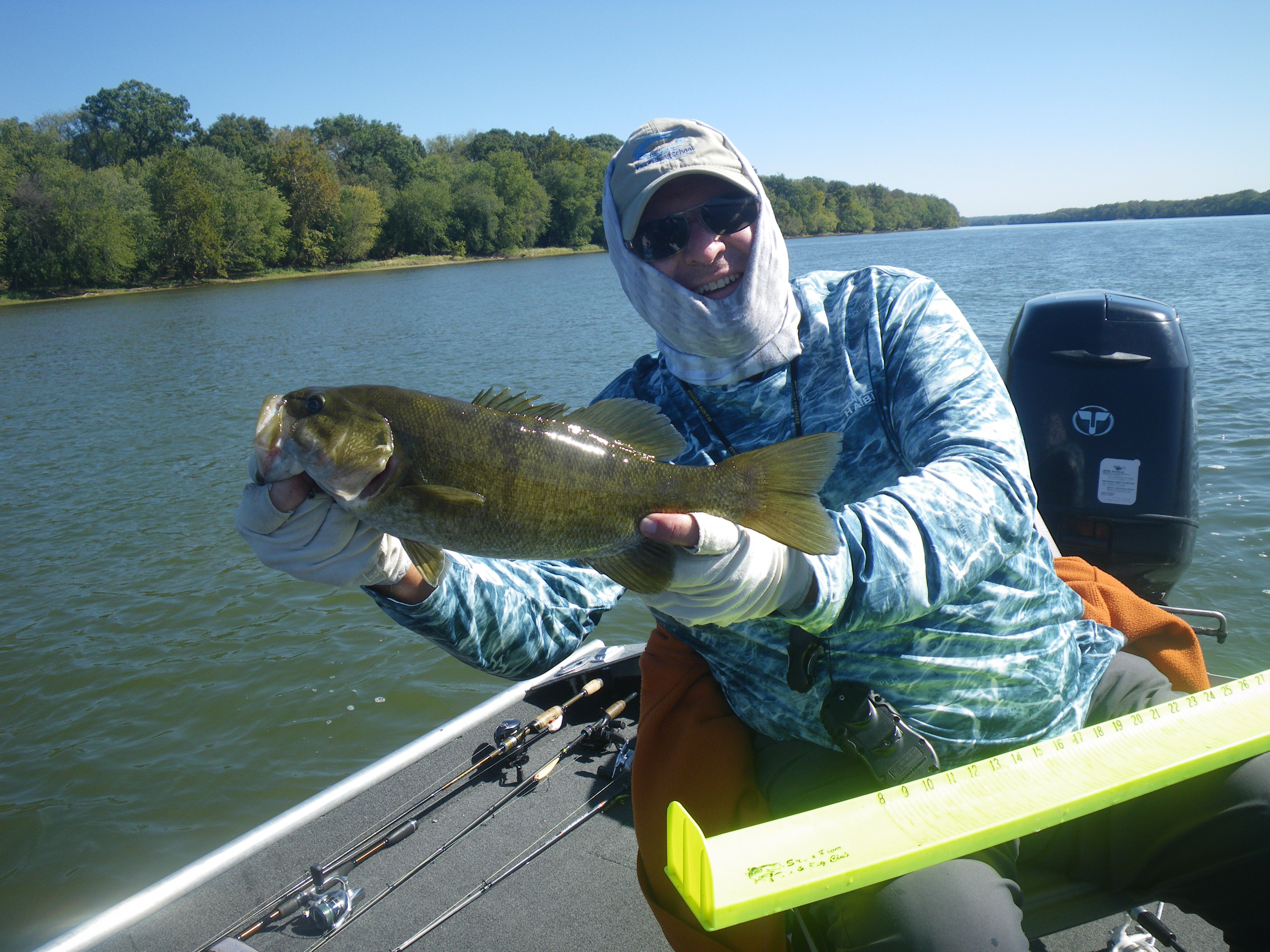 John's walleye and his 1st three smallies were caught on the same grub. His last fish was caught on a smaller Kytec paddle tail.

My 2 fish were both caught on a Zoom Swimmin' Super Fluke Jr.

It was a bit windy at times but it really did not bother our drifts.

Water is really clear and skinny in some places but deep holes abound.

Great to be back out there!

Great report! Wish you could have got a pic of that walleye.

Wish you could have got a pic of that walleye.

You and me both! I felt terrible. I was staring at his teeth and saw the hook pop off and he was gone. I really feel bad for John. This was a beast of a walleye! But...I know where he lives.

I will never forget his play calling as he fought the fish.

Great day, Ernie!  It was nice to get back out and actually hook some smallies.  That Walleye was the only one I have heard or seen anyone catch in that section.  It took drag at first, so I thought carp (we saw a bunch there).  Then I saw a dark back, so maybe big smallie, then it kind of wallowed like a catfish, but the coloring was more like a largemouth, then when Ernie tried to get it in the net, it opened it's mouth.  The head was huge and you could see the teeth.  Ernie was telling me to get it closer, but I could not control it well on the ML rod I had.  It literally did not fit in the net when it straightened out and poof, it was gone...

Fish were a pretty color as was the water. Looks like you were far from shore, were you casting or dragging?

Not much dragging...casting most of the time. Slow and somewhat erratic retrieves.

Smaller baits are the ticket.

What a report. That walleye sounds like a beast!! Exciting recap

Time for a little bigger net?

Time for a little bigger net?

Ha! It handled that big carp (earlier this year) just fine. I think I was out of practice...was too used to white perch.

Nice ones, wish we coulda seen that walleye!

wish we coulda seen that walleye!

I call the lost walleye a heartbreak

I call the lost walleye a heartbreak

Not sure I agree...there are very few fish as noted by the very few bites. The water is clear as gin and you see very little life. Today I did see some bait fish and gills...

This is from a very knowledgeable (scientific) source: "SMB fishing has been and will be tough in our local rivers for a while due to a bunch of poor year classes working their way through after crappy spring weather."

Not sure what that means other than fewer small fish.  That mean a lot died?

Not sure what that means other than fewer small fish.  That mean a lot died?

No clue either. Susky has been fishing poor at best. Are they hiding? Did they go with the flow and are now  below the falls? Who knows? We just need more water in the river.