Got out early and it was fog-city!

I waited a little while before launching and stayed close for a while.  No bites on topwater or crankbait.  I ran up a little more, but ran into thick fog again.  Tried some topwater, in-line, crankbaits and swim bait.  It was starting to get lighter and the fog was not as heavy.  I ran to my targeted spot and there was a boat above the rocks I was going to fish, so I started below.  I tossed a tube behind a rock and after moving it a little, it got slammed!  I landed a very healthy 15.75". 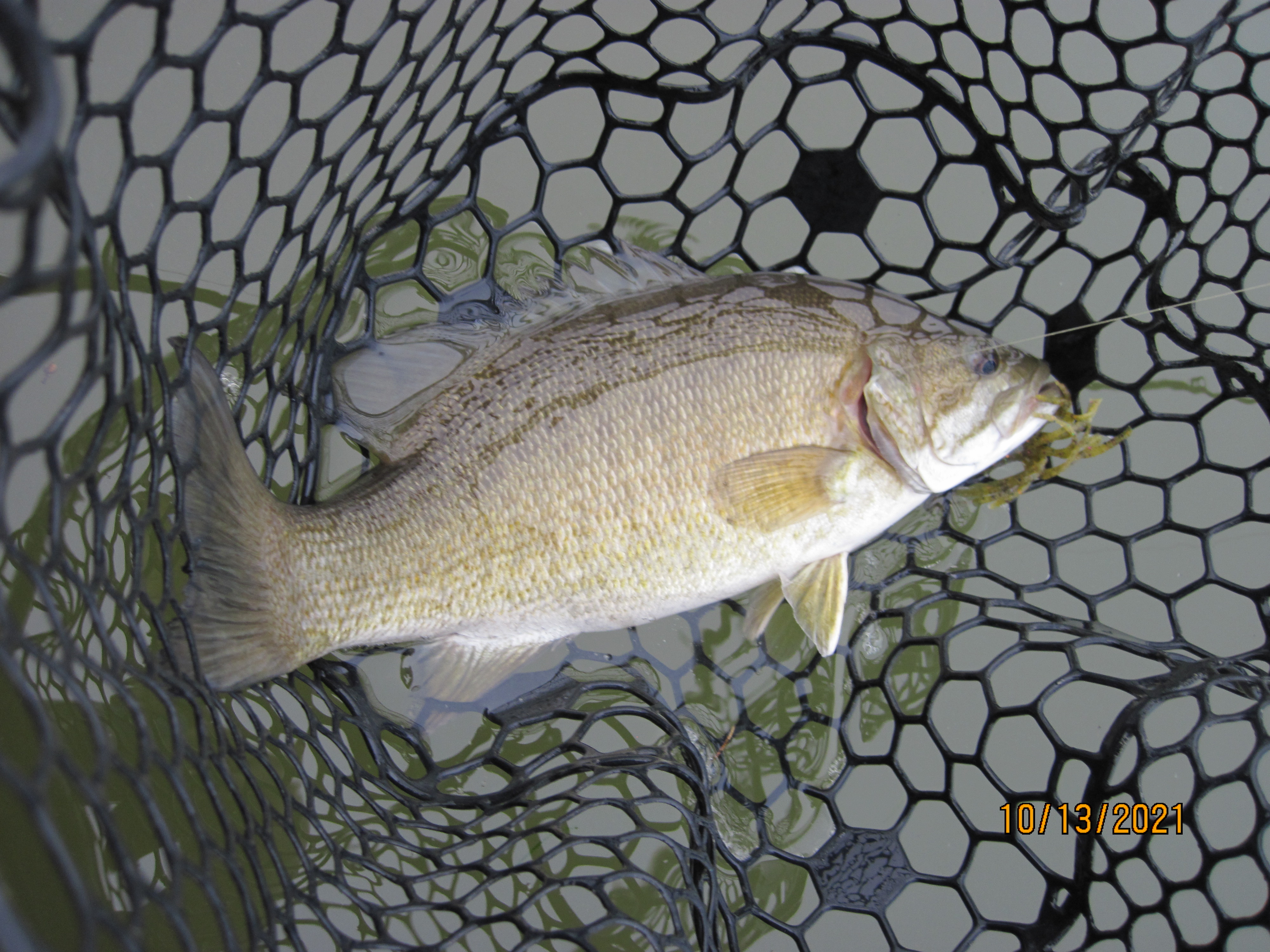 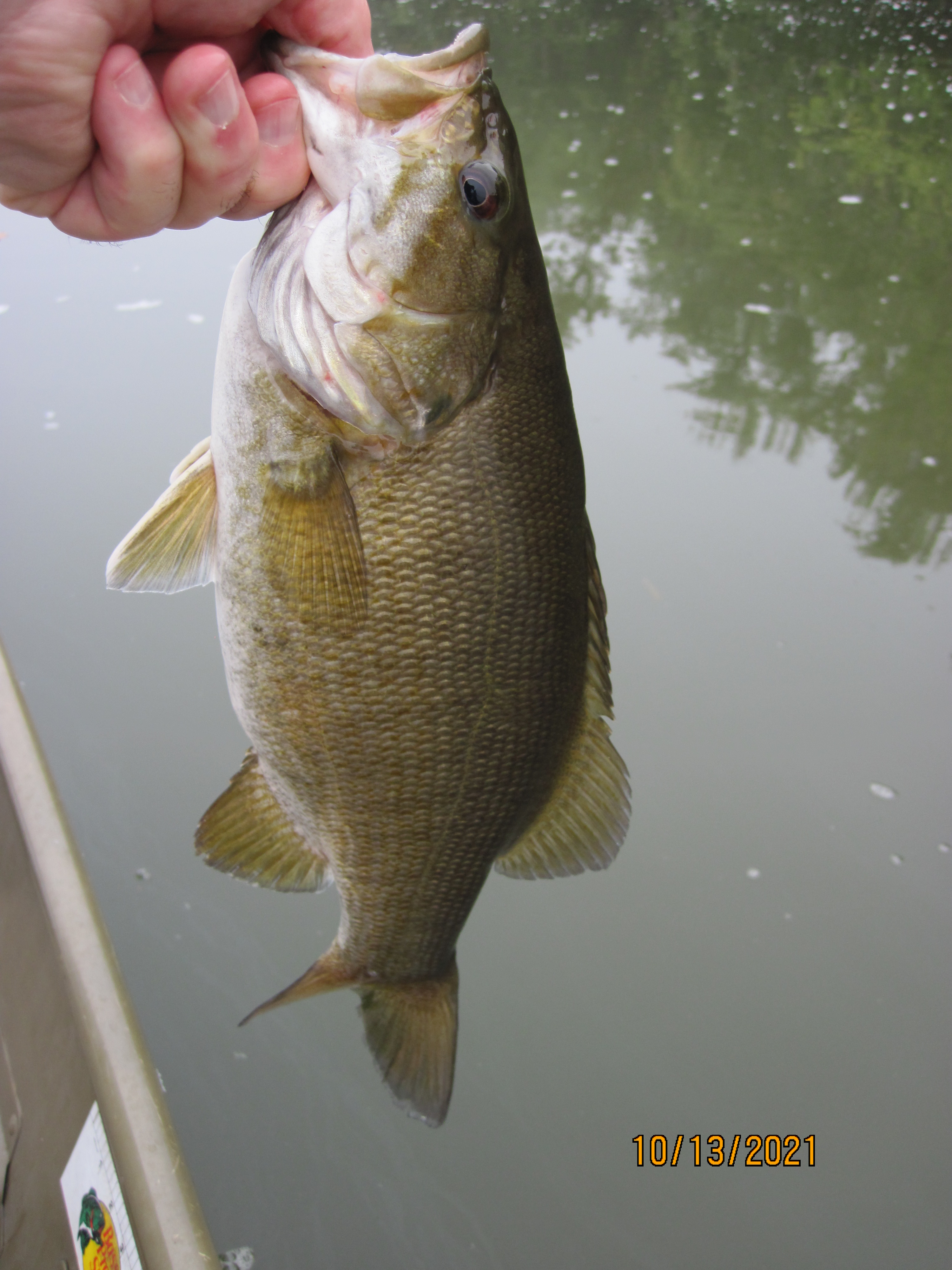 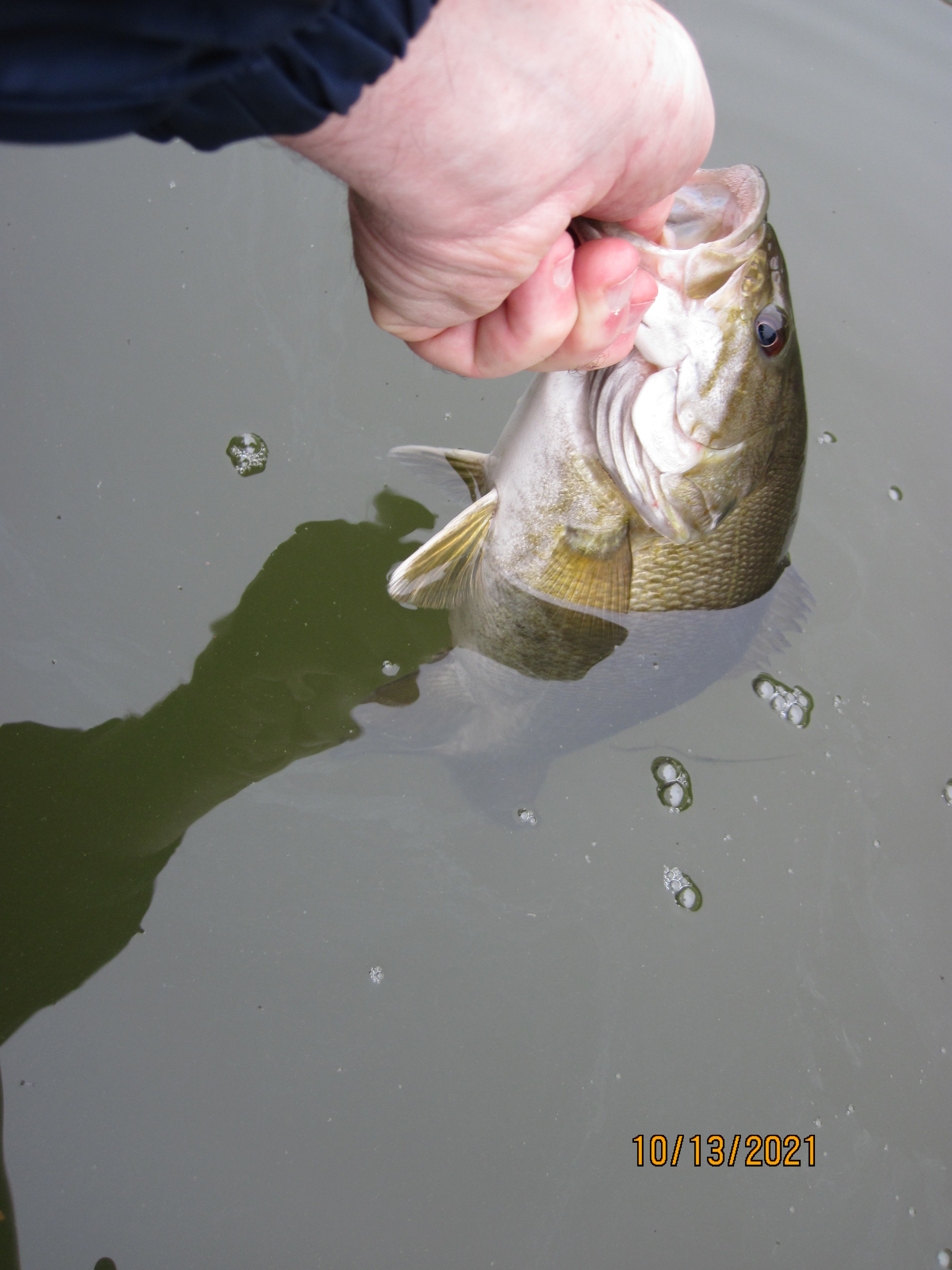 I was happy to get the skunk off and hoping I was onto something.  I worked that area for a while with different lures and did not get bit.  The guys above me stayed above the rocks and kept working the same area.  I decided to try out a new little jig head I bought just for my Jackall 2.8 swimbaits.  It has a small freestyle head and a wire keeper and I went with a 1/8 oz. #4 hook.  They looked very small, but I rigged it up and it was perfect.  After a few casts, I hooked this chunky 16.25"er that put up a heck of a fight on 6 pound line.. 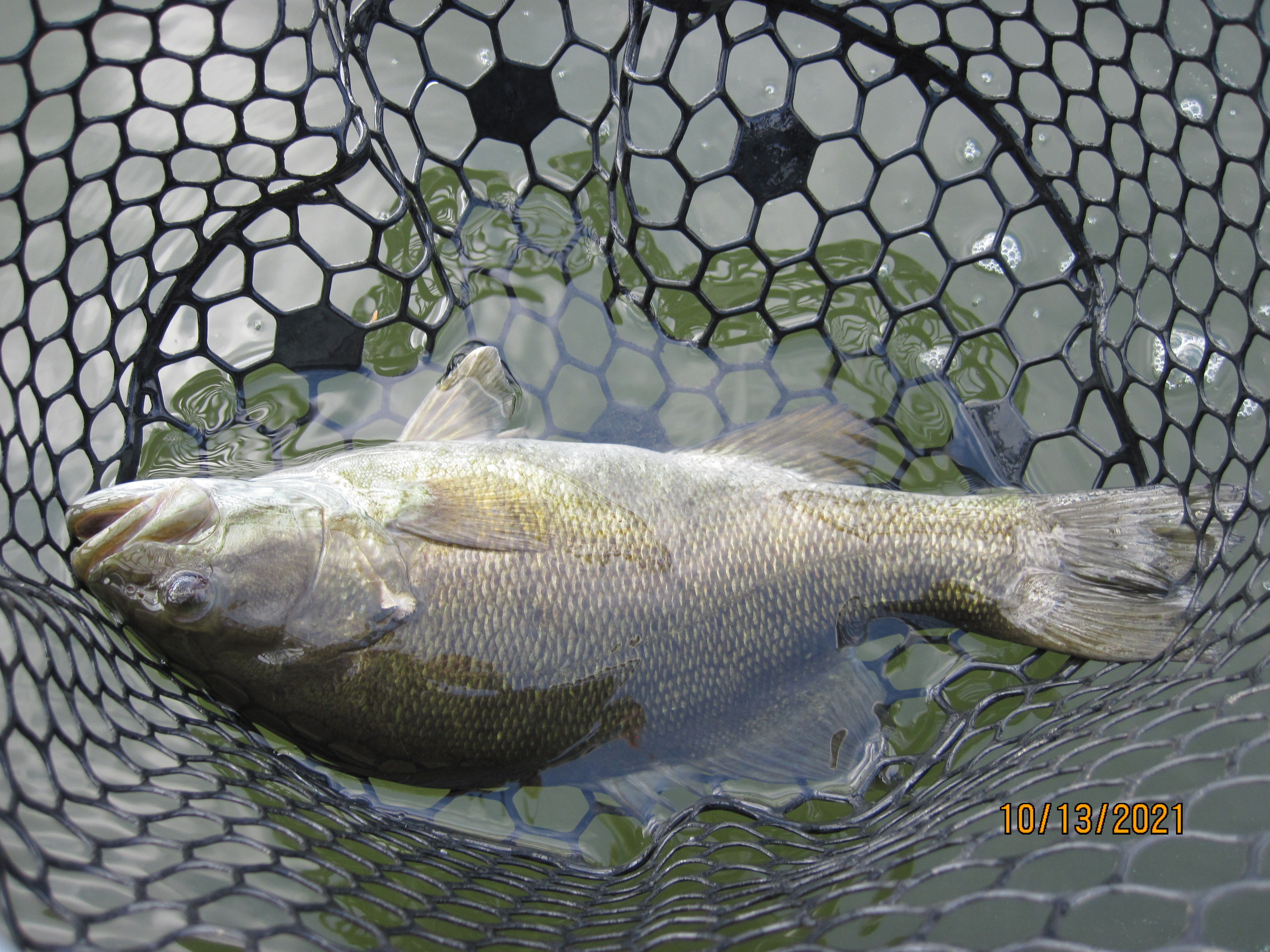 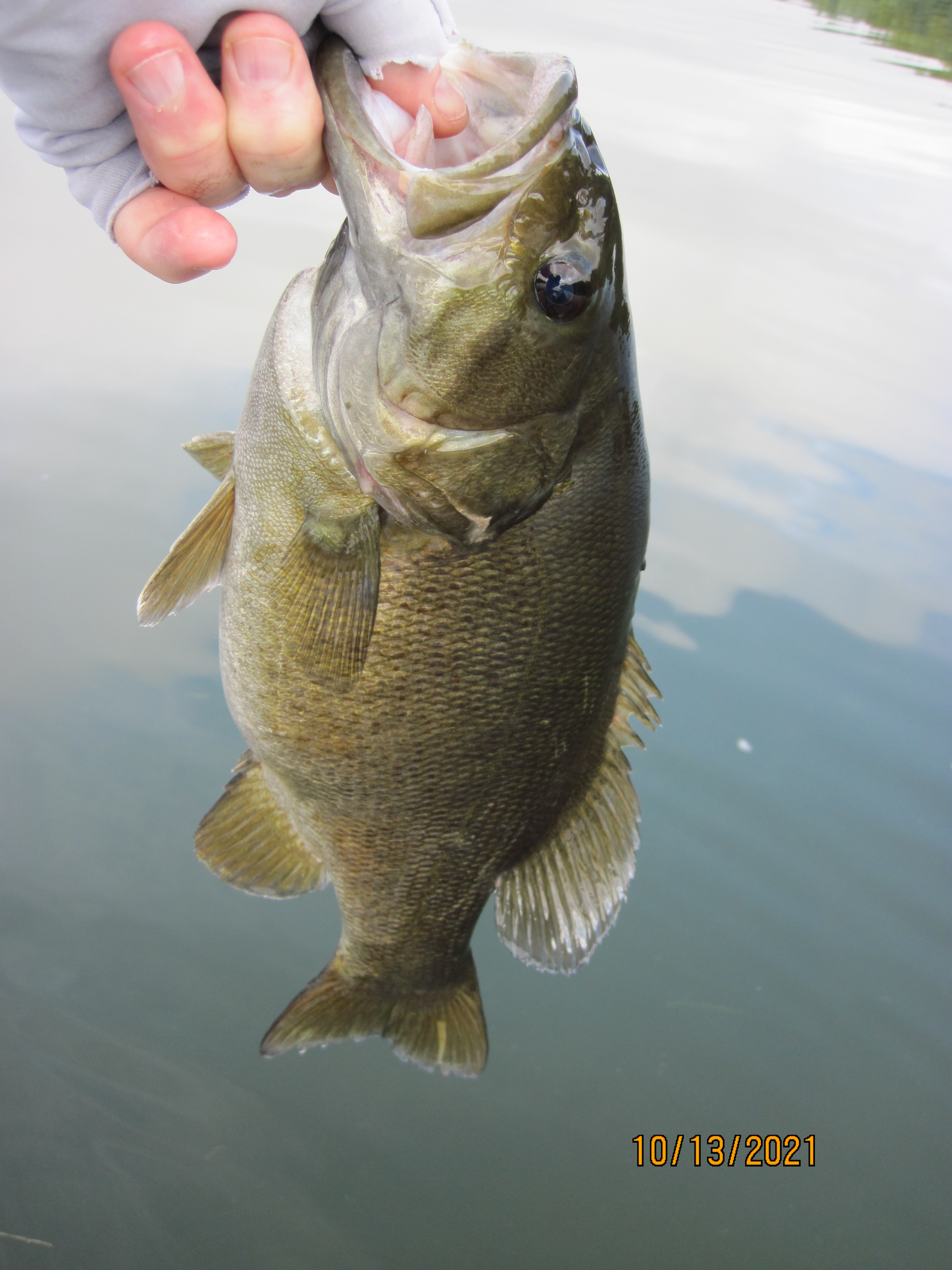 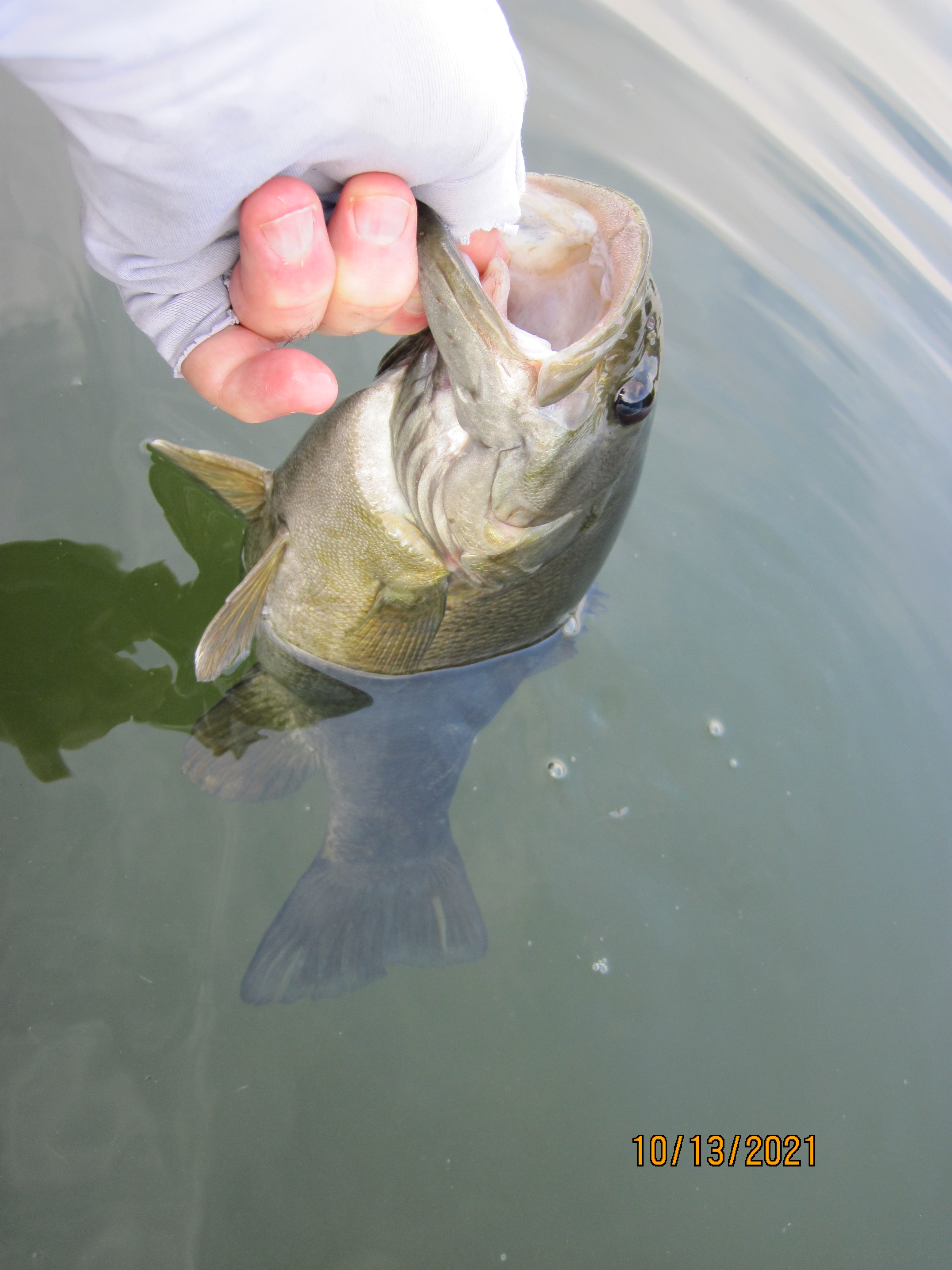 I had floated out of the productive zone and the other boat was near the rocks, so I hit the mouth of Goose Creek.  No takers there, but floating down after a bit, I got a 14.75" behind a rock on the swimbait. 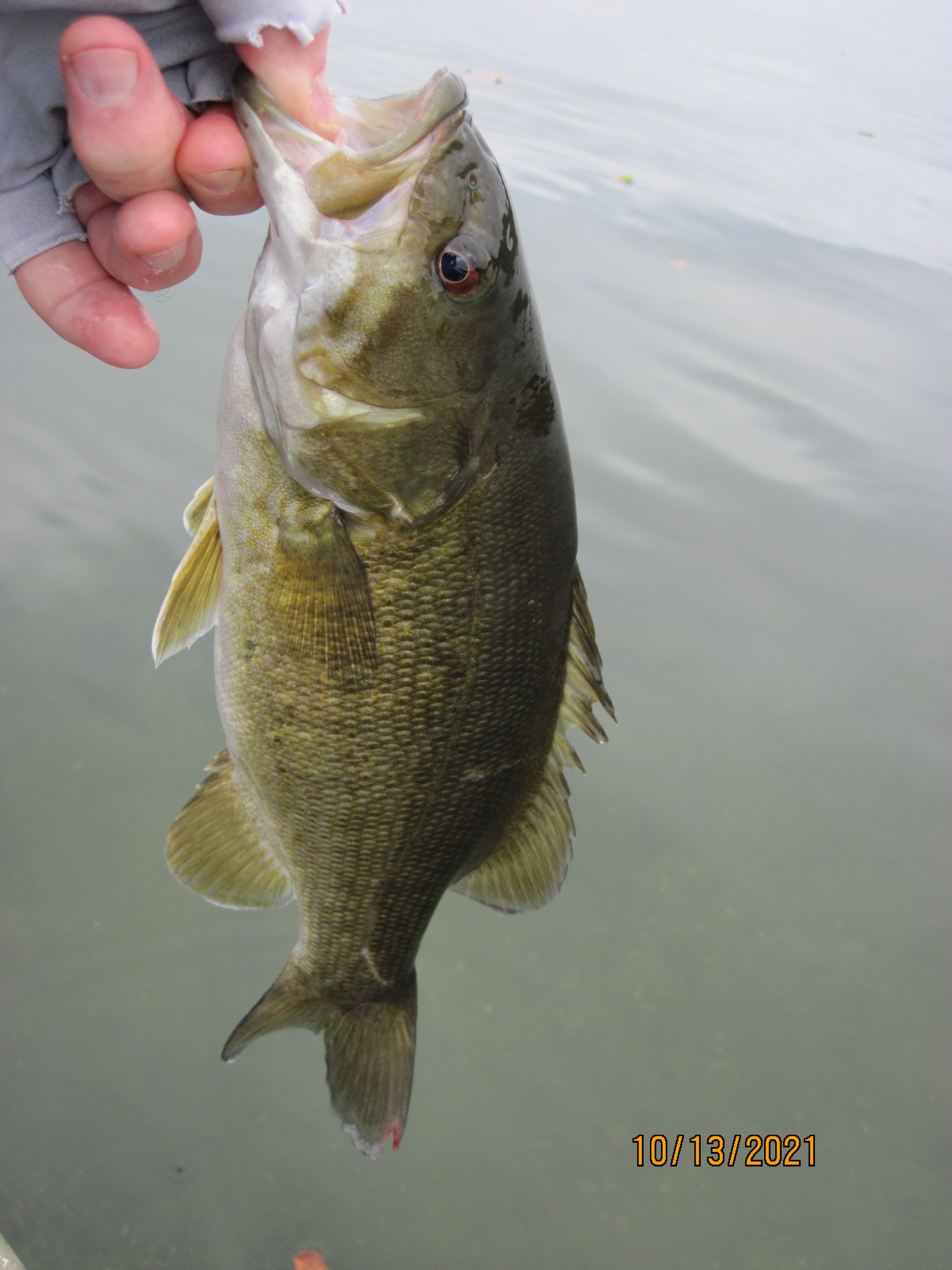 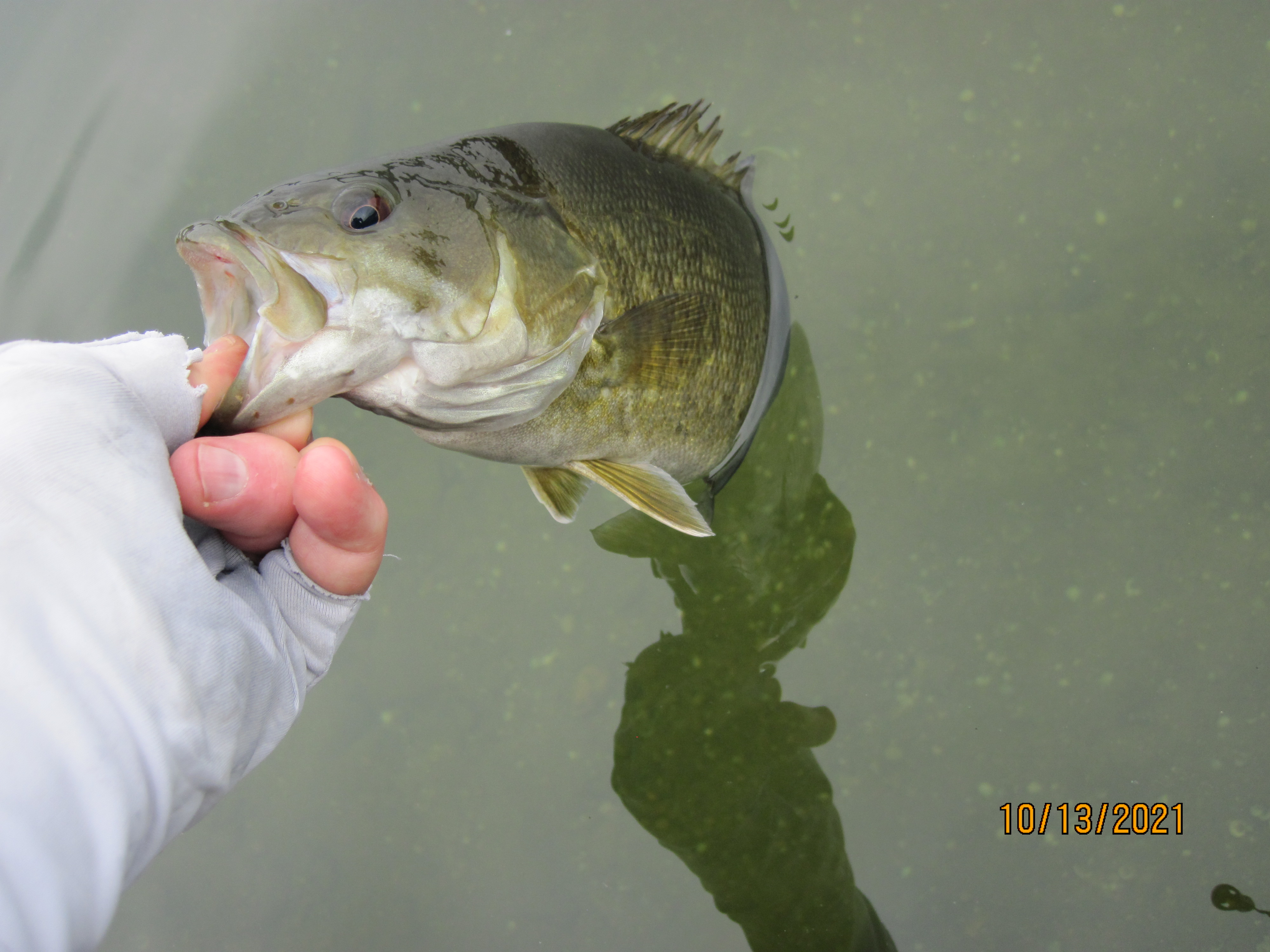 I ate lunch and then started to float, targeting rocks in the middle of the river.  I hooked this 14.25"er on the swimbait. 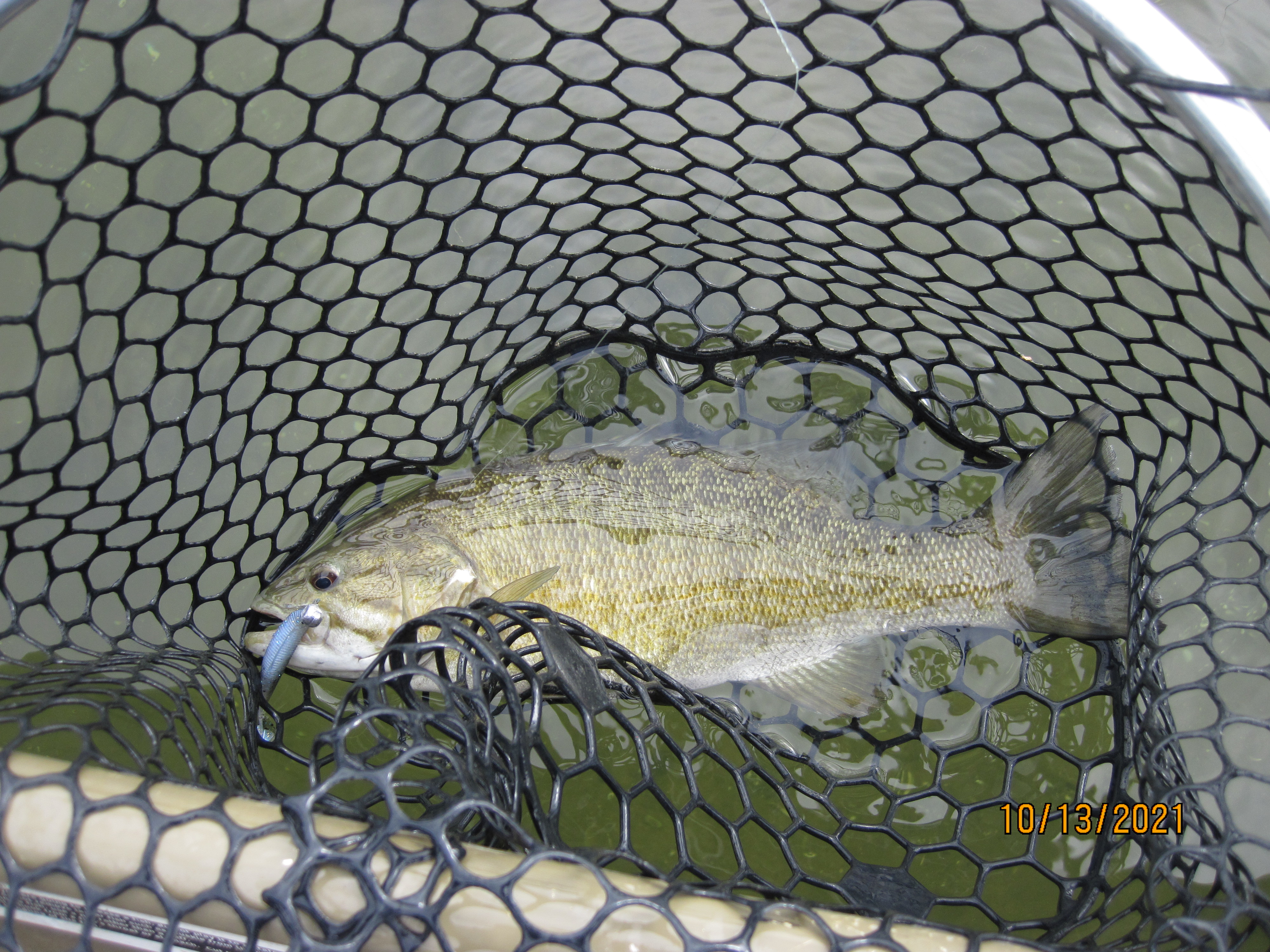 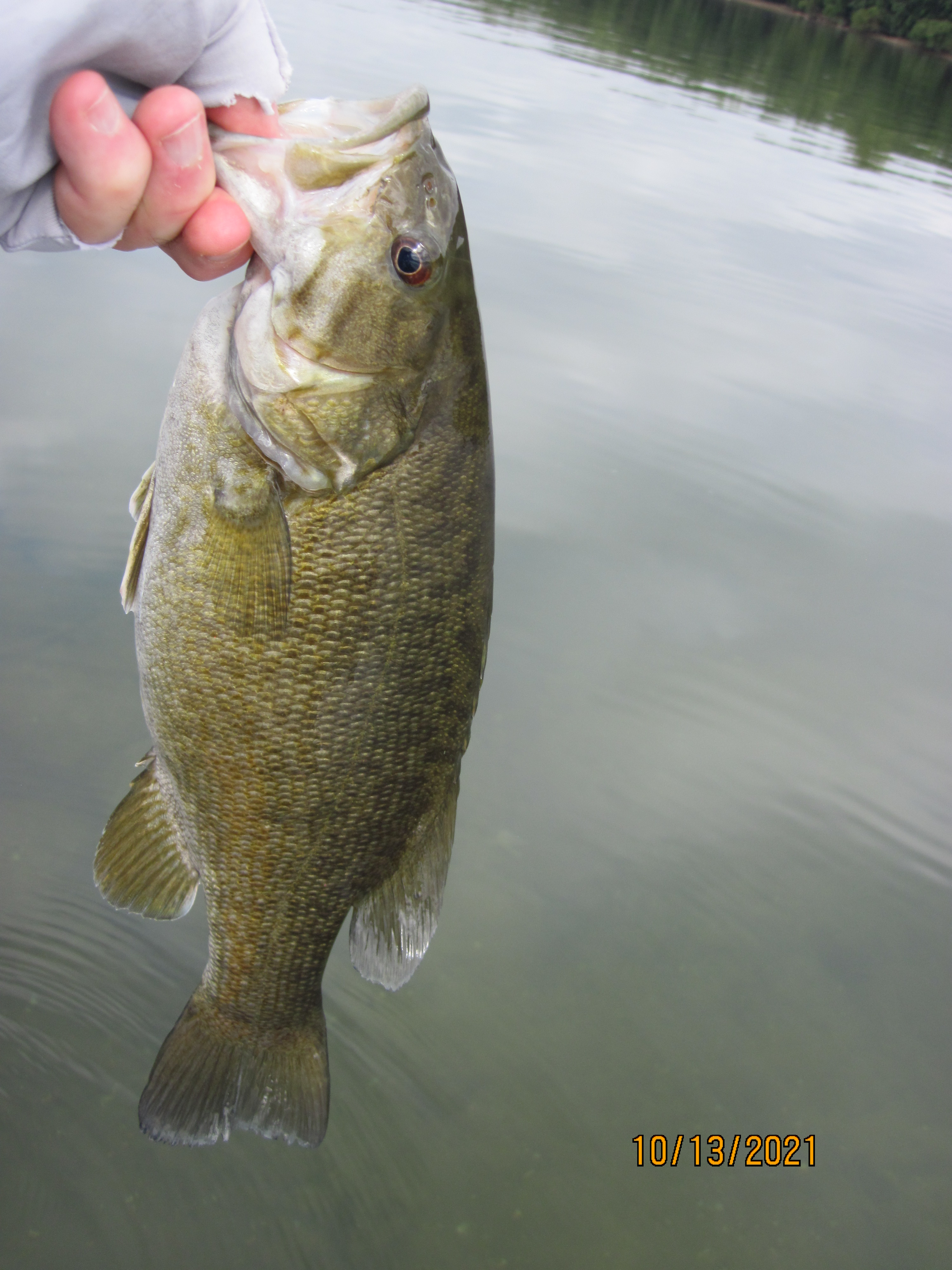 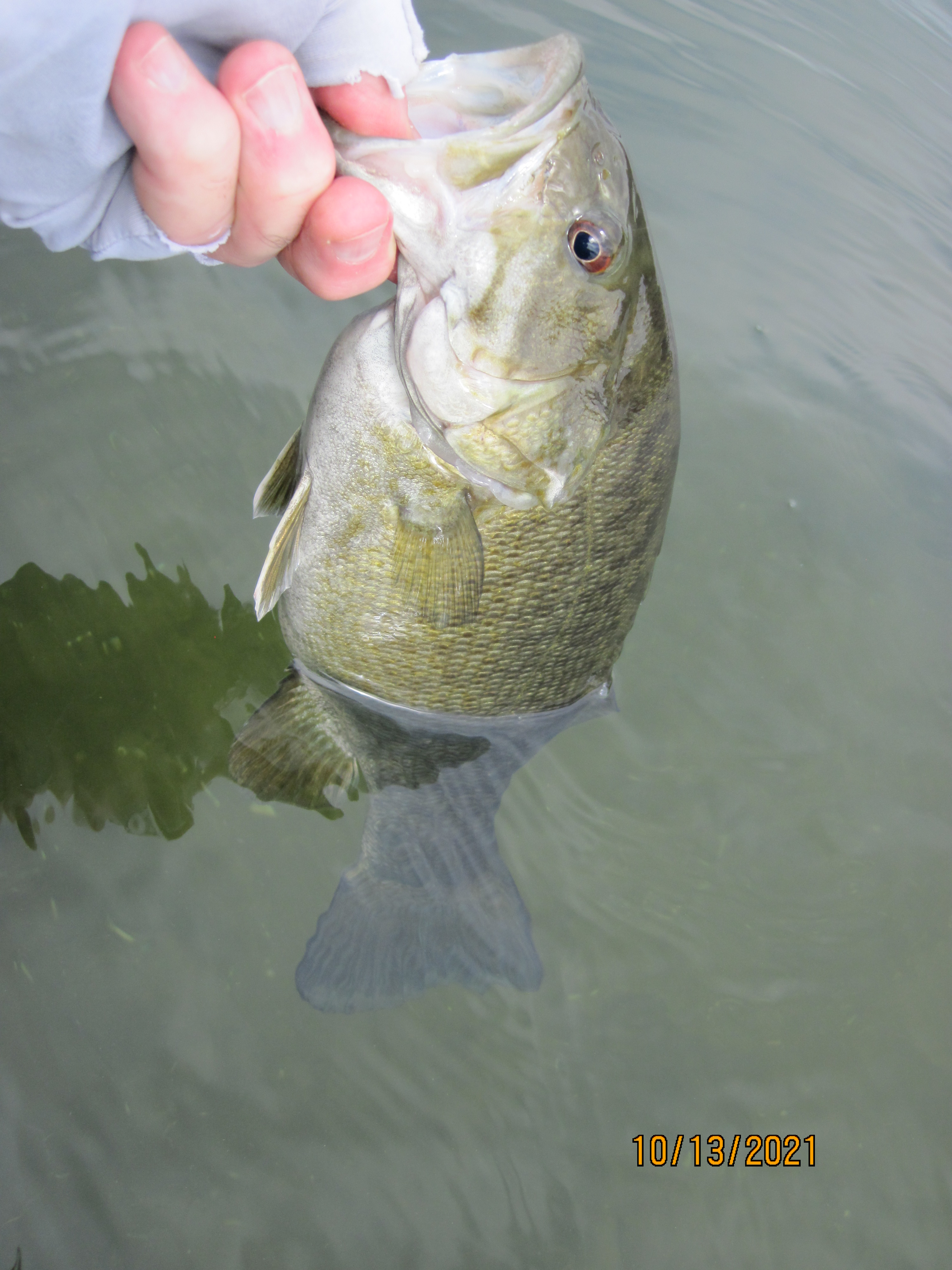 I floated a bit more and caught this 13" humpback.  I ended up catching 5 with none missed on the little swimbait. 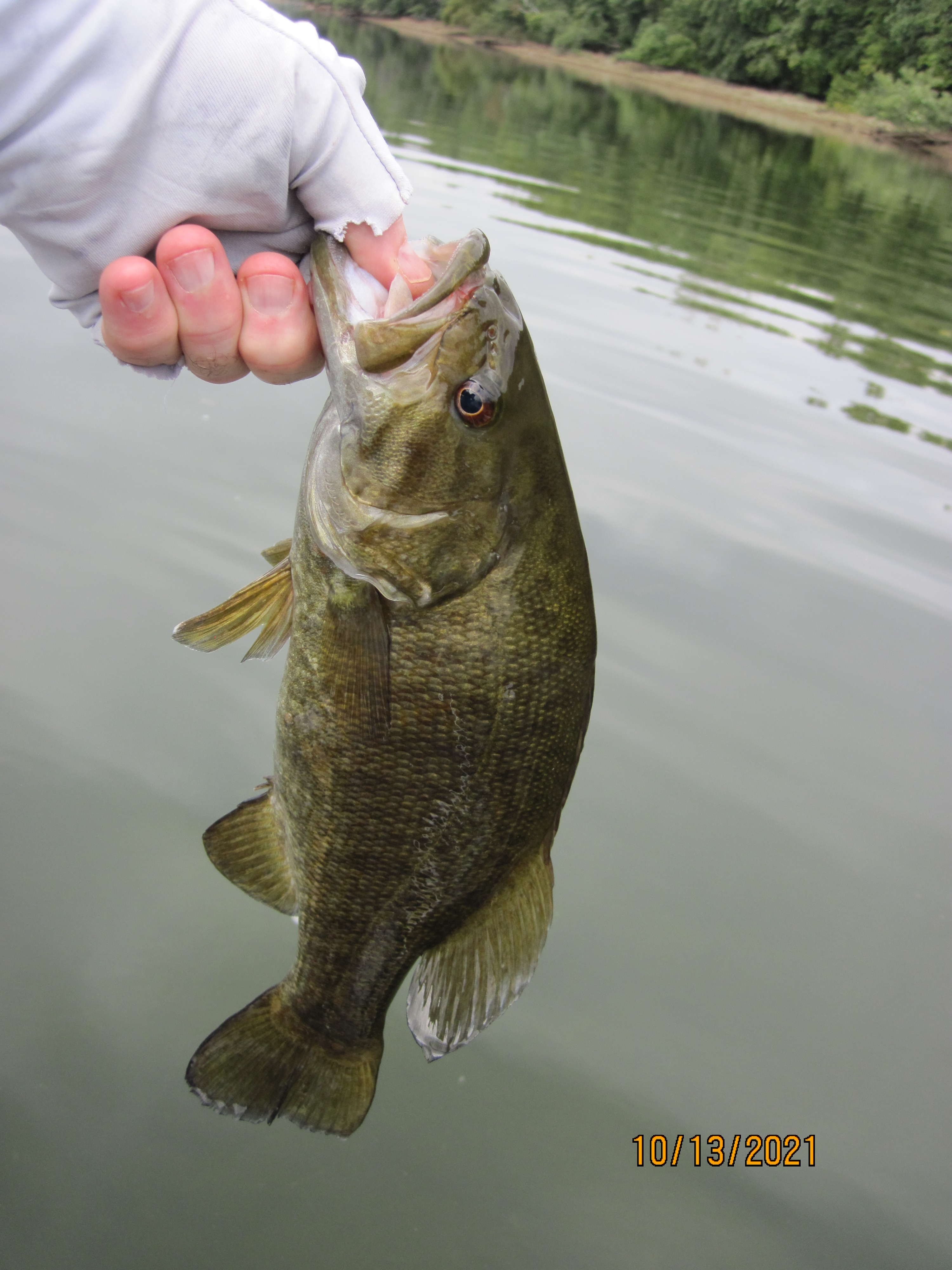 I hooked and lost 2 more smallies before I realized I had made the hook dull on a snag.   The last one I hooked had it's back half completely black.  I had drifted below the most productive area ahd the sun came out.  The bite shut down.  I tried for a while, but then ran back toward the ramp.  I stopped one more time and made about a dozen casts before heading in.  I had to wait at the ramp, but got off just before 3pm.

I hooked 8 fish and landed 6.  Really happy with my new micro jig setup.  I had the exact same weight on a ball jighead that would pick up moss and I just did not catch anything with it.  The little jig stays off the bottom at a very slow retrieve and gives the swimbait great action.

Nice job down sizing and getting fish

What was the slow up at the ramp?

Kayakers using the middle of the ramp.  Not a big deal.  It was an older couple and the guy was nice.  Just should have pulled the kayaks to one side.

River is definitely not what it was, but hopefully on the right track.  Fish were in swifter water near deeper holes.  I saw one LM, one Sunfish, a huge catfish and lots of carp.  Also saw 2 dead fish on the bottom near in one area.  One was a little catfish and I could not tell if the other was a catfish or a bass.

And I'm a kayaker too

I was coming back in and was in no hurry.  I think I had words with that jet boater when he cut me off.  Maybe a different guy.  He always comes in the afternoon.

I have asked people to move over when they really just don't get it.

I have asked people to move over when they really just don't get it.

If they are clueless, you have to motivate them

Say "I'm just learning how to back this trailer so if I was you, I'd give me some room"

John, you're killing it up there! Nicely done!

Little Seneca Lake is the worse....it has a boat ramp, AND a kayak soft launch, but yak'ers and especially the blow up variety always launch from the boat ramp. One time, I was trying to take out my boat, and there was two couples having social hour at the ramp with 2 double yak's. I gave them a good 15 minutes before I said they should probably not have happy hour at the BOAT ramp and the older gentlemen proceeded to give me grief. One of the wives seemed to be level headed and understood that there were 3 boats out in the water ready to to take out and they should move. I put my trailer in, and get in my boat and one of the boats waiting out in the water confirmed to me, "you weren't wrong.".....Rec yaker's....they are a different breed.

I get now that George may have been referring to Ernie?  Sometimes I can be a little slow to cryptic references...

I get now that George may have been referring to Ernie?  Sometimes I can be a little slow to cryptic references...

Then I stick to my original comment.  Thanks for clarifying.

John, you're killing it up there!

I used to go wading up by the power plant at Dickerson as a kid and we would basically throw anything on a hook and catch smallies.

Use to be my goto for winter smallies - remember once posting on a 20dF day with ice on the water 30 smallies and a bunch of slimy cats.  People on the ferry were amazed I waded out in the water to hook the boat up on the trailer.