Just a teaser for now. Got in some fishing yesterday and today, and it's going well. 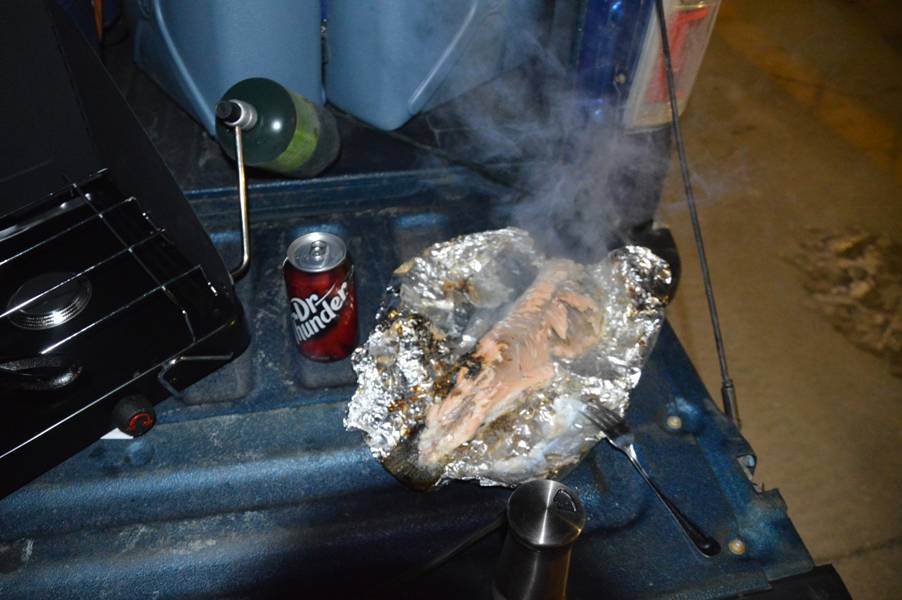 What is Dr. Thunder?

Luv bachelor cooking - wrap anything in tin foil and heat up

Just getting online again in a Walmart parking lot in Billings.  Heading south to Cody, WY tomorrow.  Going to look around Yellowstone. Last Tuesday I had another decent day at the same reservoir, another first fish of its type.  I may stop there again heading east.

Two weeks ago I got on the road towards Montana.  I spent a few cold nights in my trailer in Walmart parking lots.  Nearly crashed twice in SD on icy roads.  Somehow I made all the right moves to get the truck and trailer back in line.  The first time happened just minutes after I was thinking of what-ifs about just such an occurence.

Monday morning I completed the Mitchell to Rapid City leg.  One photo stop was Mt Rushmore.  Continuing on that road leads to the Pactola Reservoir where I planned to do most of my fishing. The reservoir is located about 15 miles west of the city at about 5000ft elevation. The roads to the boat ramps and catch-and-release creek below the dam were all iced over, but there was a mostly clear overlook parking lot and primitive restrooms.  I strolled down the steep bank to take a look and could clearly see trout swimming all along the shore.

I returned to the truck for some rods and lures, and got started.  They were not having any of what I was throwing. They would approach and within a foot would just turn away.  A Mepps spinner was the only thing slightly enticing.  So back to the truck for some trout nuggets, hooks and split shot.  I learned that tossing it and an leaving it there unable to be seen, the trout would swallow it with no trace of them taking it.  I'd eventually reel up and find one on the line. Unfortunately this means deep hooking. I found that if I keep the bait shallower I could watch them take it.  They would suck it in and spit it out several times.  So the tactic was to go for a hookset as soon as they sucked it in.  This worked great and I could hook them in the lip and release them with no issue. These were the first trout I had ever caught.  Of course I did keep keep one for dinner that first night. I couldn't pass up the opportunity, so when I headed back down to the city I made a stop a Walmart for a gas camp stove, cast iron pan, foil and some seasoning.  I cooked it in the Flying J truck stop parking lot.

I also kept another the next day for dinner and cooked that one in the parking lot of the reservoir visitor center overlooking the reservoir. But that happened after some other firsts earlier in the day.  I slowly worked my way along the now less icy road to the western boat ramp.  The lot was completely empty and the weather was in the 60s so everything was melting.  This time I launched the kayak.  The reservoir is known for having rainbows, browns and lake trout. I figured I could catch more rainbows but I didn't know what else to expect.  There was some wind making the middle and south side choppy so it was harder to find the rainbows.


On Wednesday I continued on to Montana for my Warfighter Challenge event which was the primary purpose of the trip. The following Sunday was the end of that. Monday I cruised down to Cody, WY and took the road to the Yellowstone east entrance for
sightseeing.  Just that morning all the park entrances had been closed for the season to regular vehicle, so I knew I wouldn't be able to go any further. Then I started back east.  I got to the Bighorns around sunset.  I was dark by the time I got to the top of the past at over 9000ft elevation.  I spent the night in Gillette, then got back to Rapid City and the reservoir the next morning.

This time all the snow and ice was gone, temps in the 70s and the east ramp was easily accessible.  I didn't quite get my limit of 5 trout.  I then decided that if I could get my daily limit the next day then I would just head straight home rather than make some other fishing stop along the way like Lake Oahe. After catching just one my dog managed to snag a treble hook on a Rapala minnow. Before I could get that all slacked and cut from the line he got it hooked inside his nose. I didn't have any wire cutters with me and some guys fishing for lake trout nearby didn't either so I had to go back to my truck to get them.  I was able to cut off the lure and a point that wasn't embedded.  One point was in past the barb, the off just barely poking in. But he was no longer complaining and freaking out.  So back to fishing we went. I was able to find trout in numbers and biting in the same area as my first day and fairly quickly filled my limit.

I got the fish all dressed and got out of there ASAP so I could get Uzi to a vet. I found a place just in town along the road to the reservoir. I was expecting a pretty big bill but it was only $206 for everything incl meds.  They had to knock him out to do it.  While they did they I made trip to Walmart for some food.

I brought home 9 trout totaling 12.8lbs without heads and guts.

BTW, pike are good to eat if ya know how to filet them.

Quite the adventure!  Cool stuff, except for the mishap.

I'm surprised that Uzi stays in the bow of the kayak - esp when you have a fish hooked on.  Good dog!

Mine would be swimming first chance he got

Uzi really only likes to swim when a frisbee is involved.

But won't swim for it