My buddy Colin and I booked this trip in June and weve both been like kids again waiting for Christmas Day. After a long wait, planning, tying flies, etc, we set out last Thursday. My flight was at 8:30 am and I met Colin in Denver where he lives. A short flight to Bozeman and we were on our way. Heres a day by day recap with lots of pics.

Day 1- even though it was a travel day we got in early enough to get our vehicle, a quick stop at the Gallatin River Guides fly shop for some business and then check into the house. The place was right on the Gallatin River and was simply amazing. 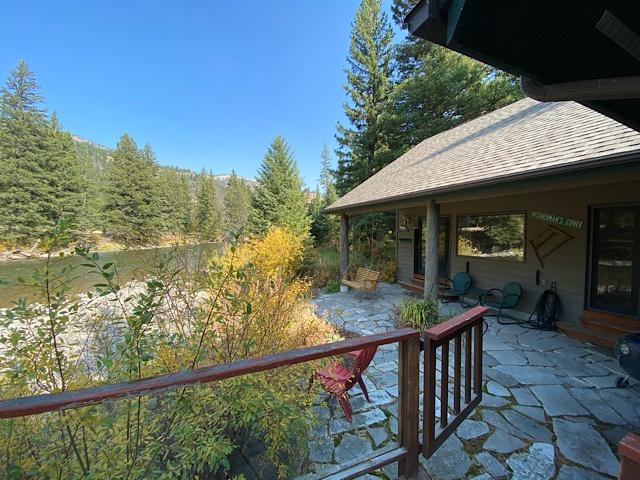 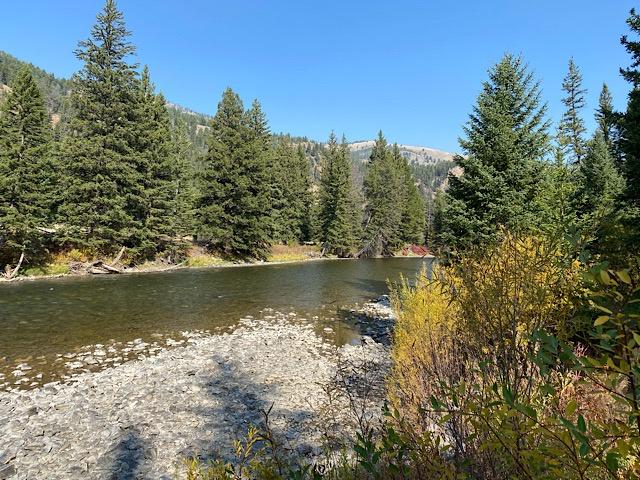 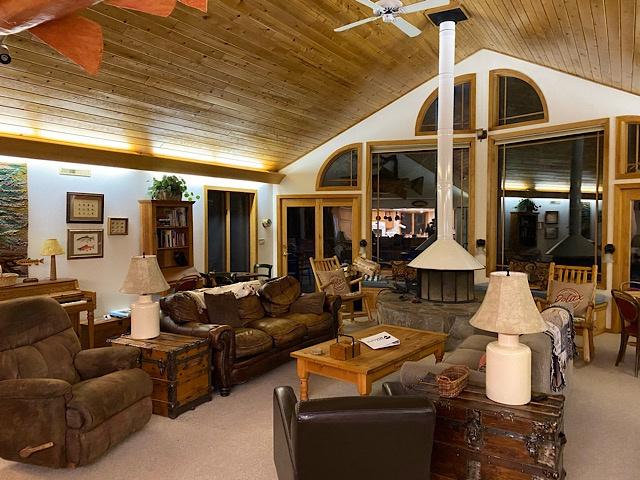 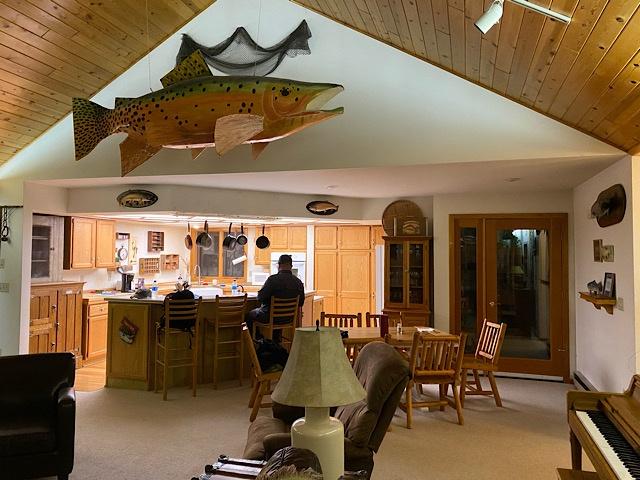 BTW, this house is on 1.5 acres of riverfront property with a second smaller cabin on the property and is for sale for $1.5M. Theres only one other house nearby upstream on the other side of the river. Anyone want to go in with me?

It was a really gorgeous section of river and held plenty of good fish in spite of being a bit low. 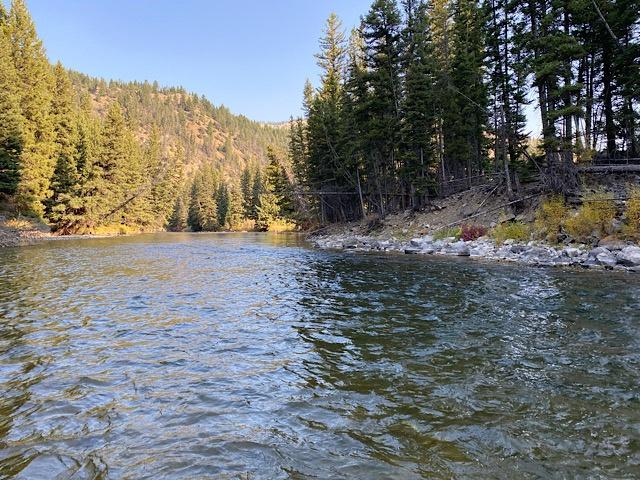 We unpacked, geared up and were on the water by 5:10 to get a couple of hours in. By 5:20 I landed my first fish, a nice hefty brown trout. 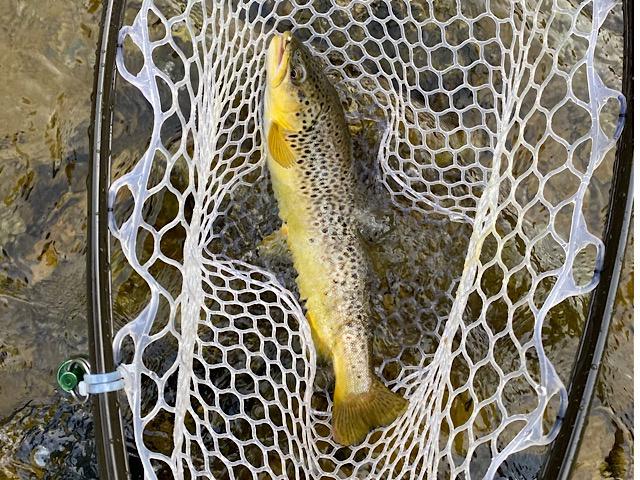 Shortly after that I caught my first rainbow and then this nice one. 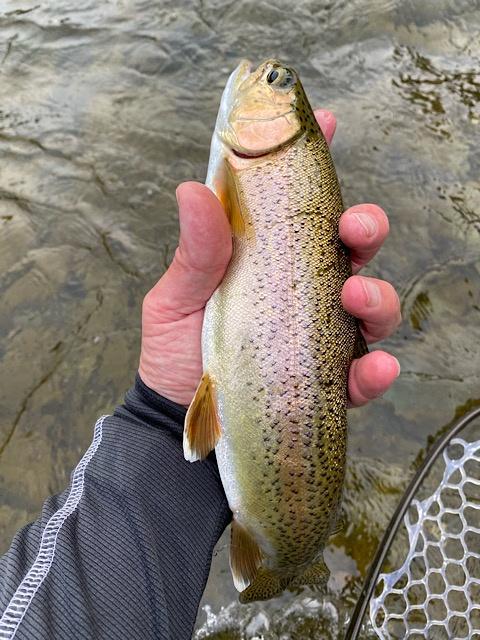 Then around an hour in I hooked up big. This fish felt heavy and made several great runs. After a spirited fight I brought this 18 female brown to net. 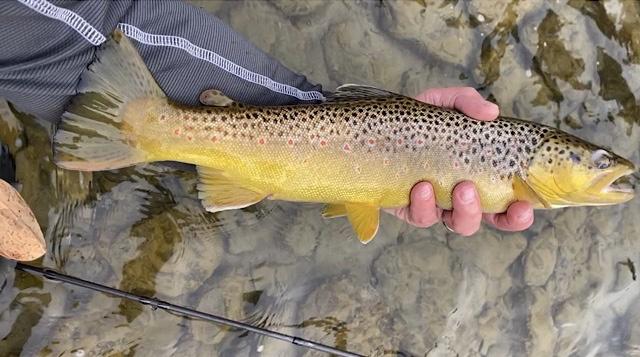 I ended up landing 6, lost 3 and had a few other hits. Colin landed 5 or 6 as well. Not bad for our first night in town. We celebrated with a bourbon, which would become a nightly ritual. 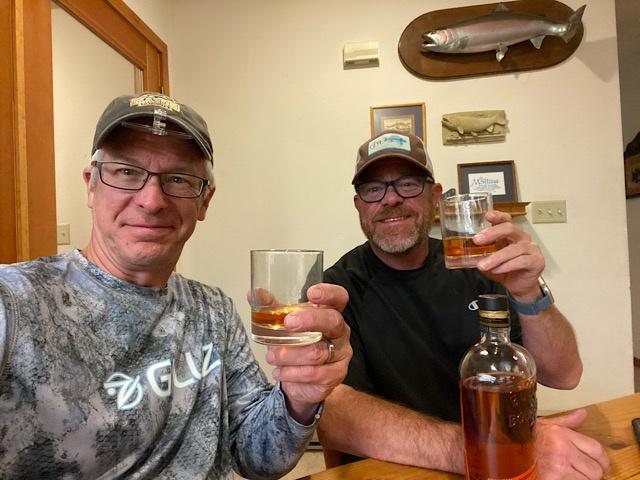 The plan was to meet at 5:30 am, drive south and hike into Yellowstone Park in search of large migrating brown trout going from Hebgen Lake to the Madison and its tributaries in their way to spawn. We had great young (25 yr old) guide named Garrett Kemberling who was seasoned beyond his years. His mentor was the guide i fished with last year. They became friends being from the same small town in PA fishing the same waters i fish. If you find yourself in  Big Sky, ask for Garrett, hes a true professional.

It was a mile and half hike in with my hand on the bear spray much of the way as it was just getting light and we hiked through woods, meadows, spring creeks, etc.

We never did land a giant but caught. Few nice fish including a beautiful native Yellowstone cutthroat. 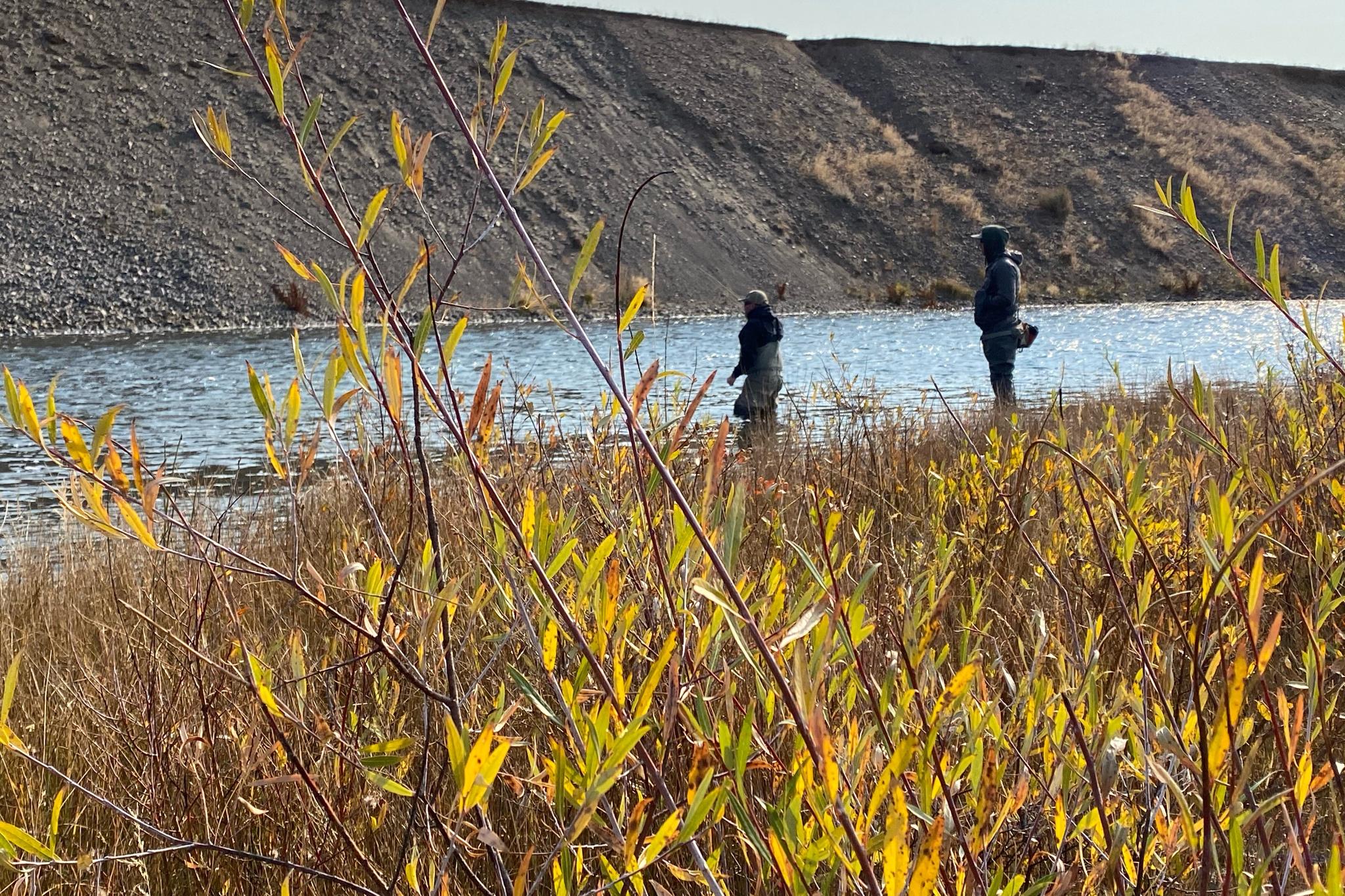 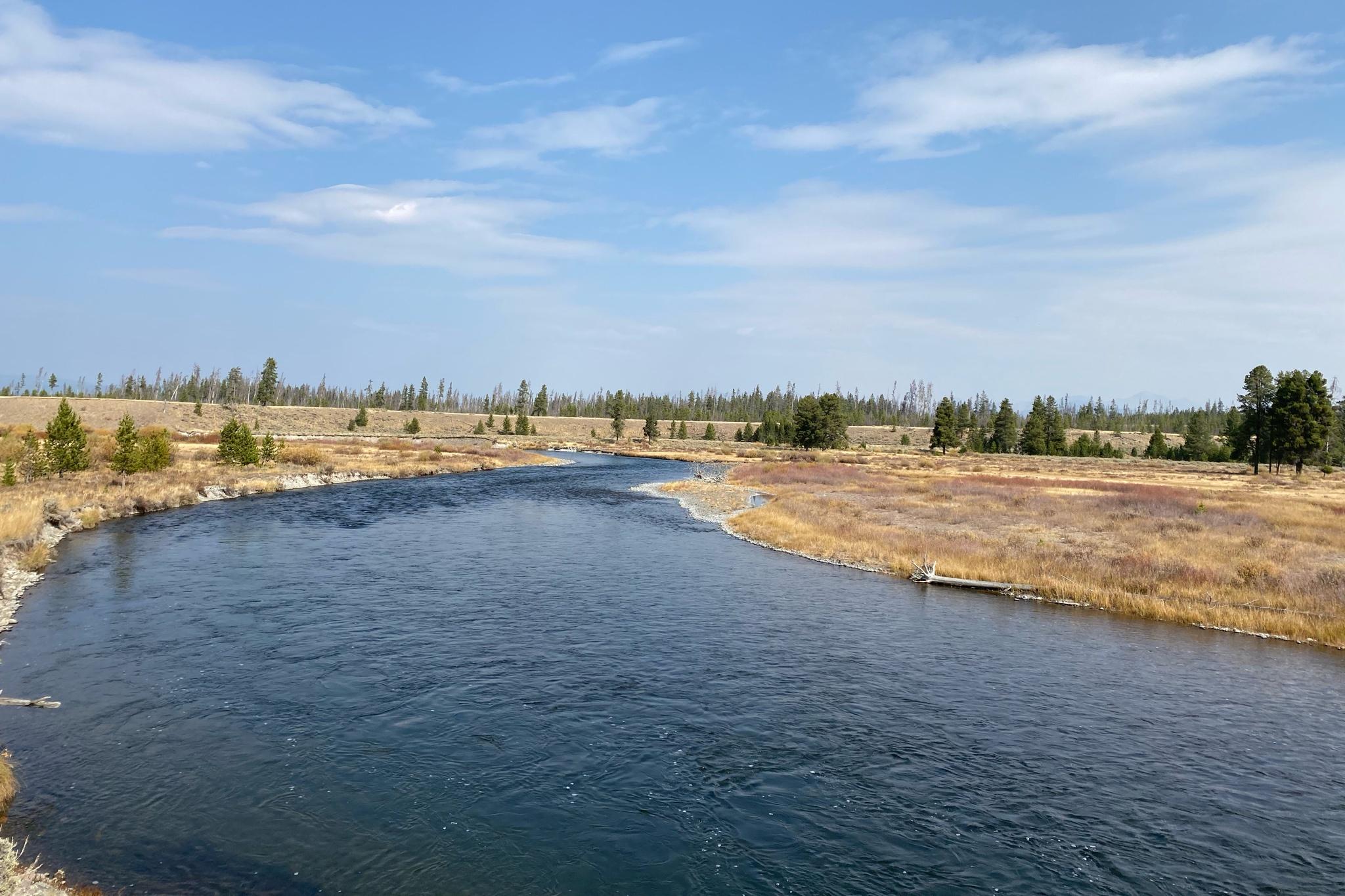 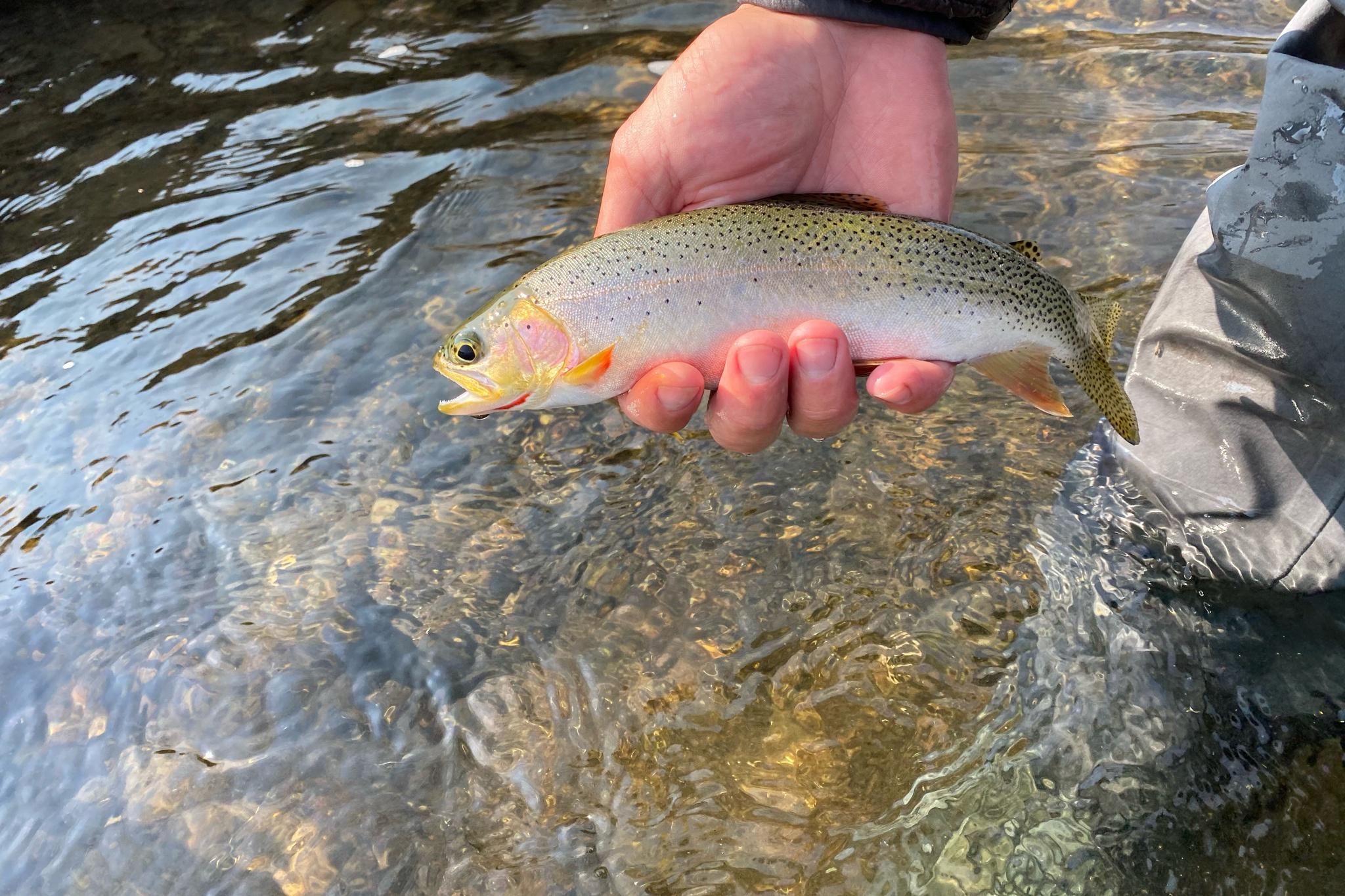 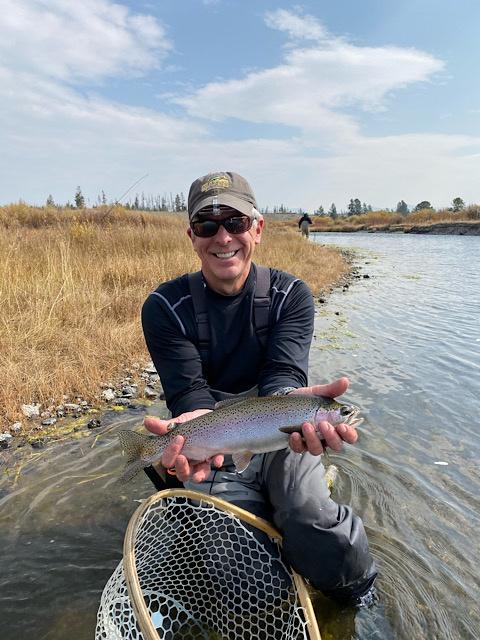 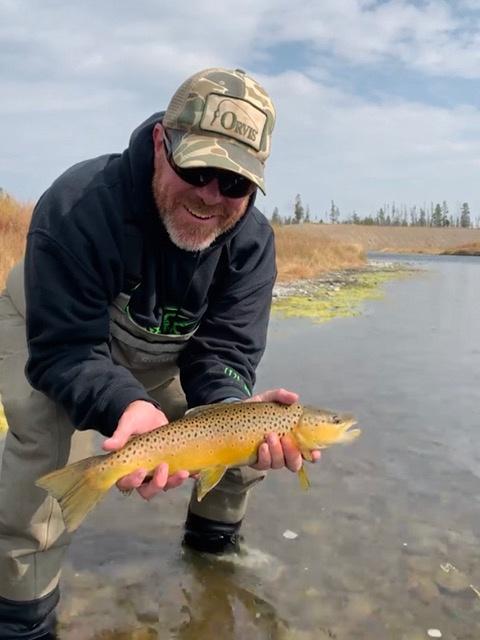 All told we hiked about 5.5 to 6 miles. The jet lag and 5900 ft elevation put a hurting on me and by the last hour of the day I was exhausted. Then I remembered we had to navigate up this hill to get to the parking lot. Garett told us that the locals refer to it as cardiac hill. 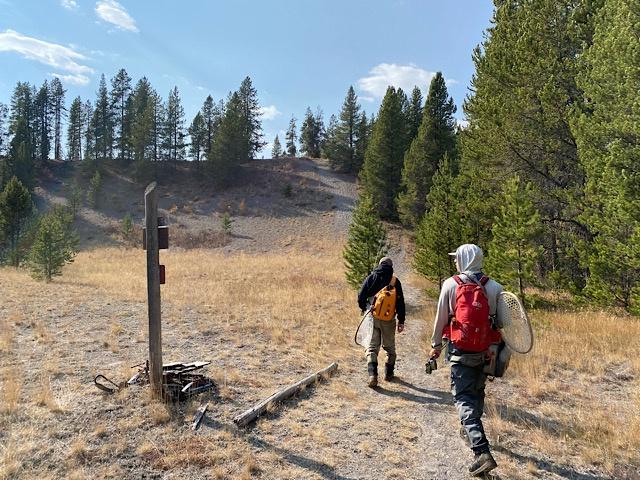 In spite of the exhaustion, after parting ways with Garrett, we went to a spot on the upper Madison that I fished last year. The water was lower this year and it fished completely different. I only had 2 hits. Since it wasnt on fire we headed home.

That night my body was shot. Dehydrated and exhausted I got massive cramps in both legs and then got the chills. I took in some electrolytes and did a dip in the hot tub and prayed my body would recover by morning.

Saturday morning I was still hurting a bit but recovered enough to press on. We met at 7:30 to do a float on the lower Madison below Ennis lake.  We originally planned to do the Yellowstone so we got 3 rivers in but it had been fishing slow the last few days so we opted for the lower Madison. Even though its technically the same river, this section was completely different and may as well have been a different river. It was gorgeous. 11 miles through all types of scenery. We threw streamers and nymphed a bit. It was an awesome experience, possibly the highlight of the trip because Ive never done a fly fishing float trip before. Garrett was a master on the oars and put us in beautiful water. 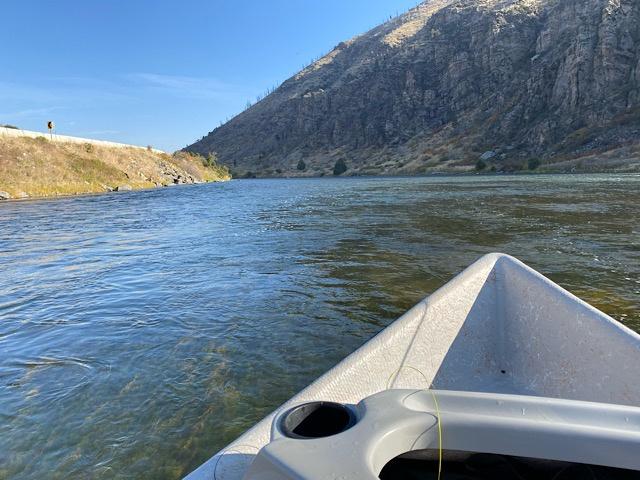 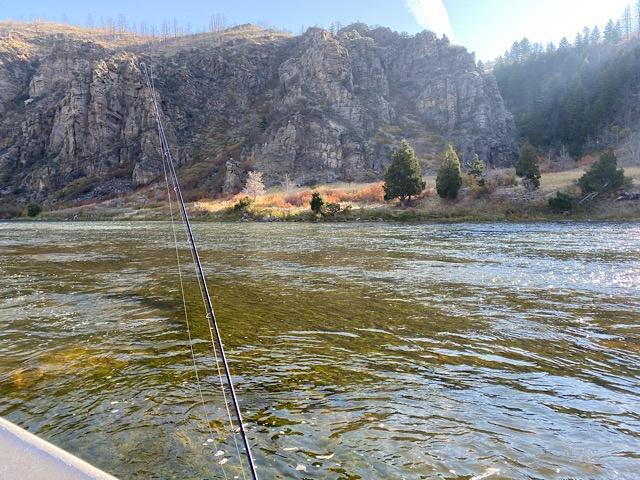 We caught some nice fish and had an amazing day with lots of laughs. My 2 highlights were when a brown came out of a hole in front of a boulder and we watched it engulf the streamer. Thats the brown in the pic below. The second was my shot at a large trout. I hooked up and moved the fish enough that we all got a look at it. It was easily a 22 to 24 brown that kicked my ass and got off after a few seconds. 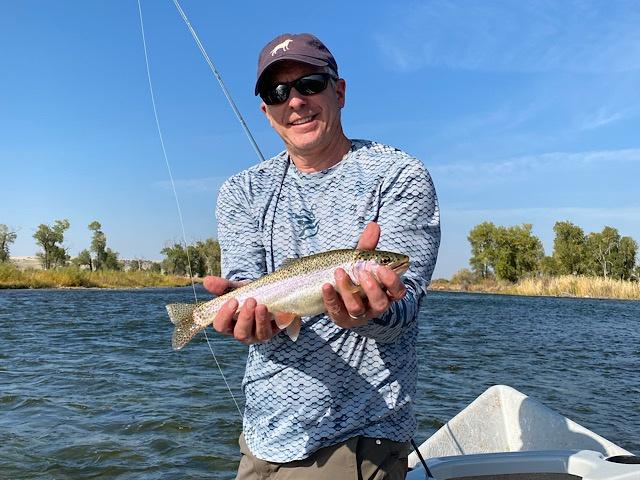 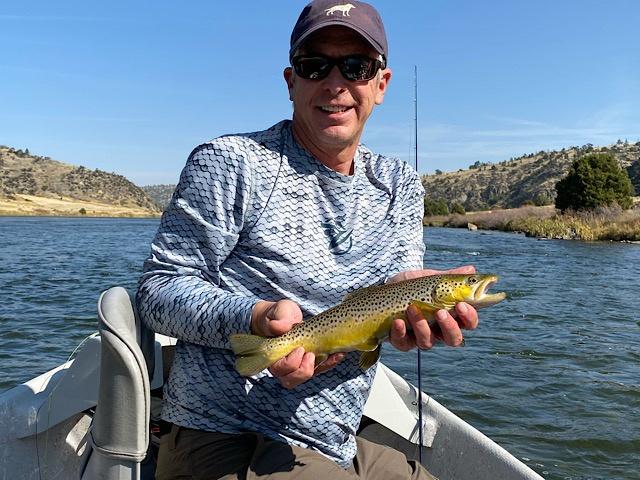 As we got within 5 minutes of the ramp Garrett pointed out that Colin had a Montana grand slam of a rainbow trout, brown trout, cutthroat trout and a Rocky Mountain whitefish (which we caught a bunch of this trip). As we got close to the ramp he said last chance Paul, you cant let Colin beat you. As we drifted by the near bank, with a crowd watching, I hooked up and completed my slam. 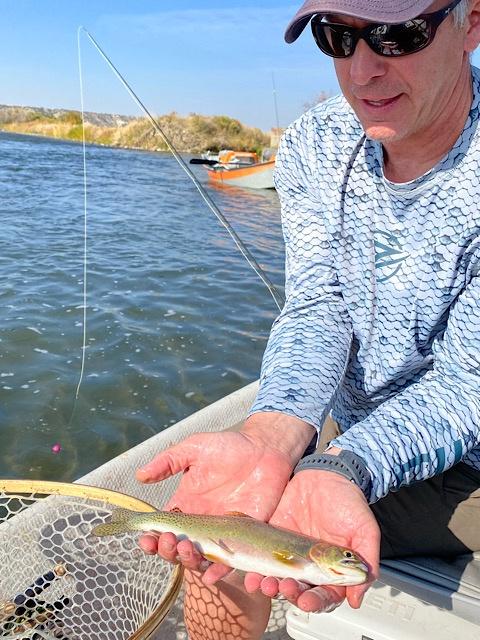 We got back to the house and went right out back but the fishing was slow. I landed 2 small rainbows and 3 or 4 whitefish. 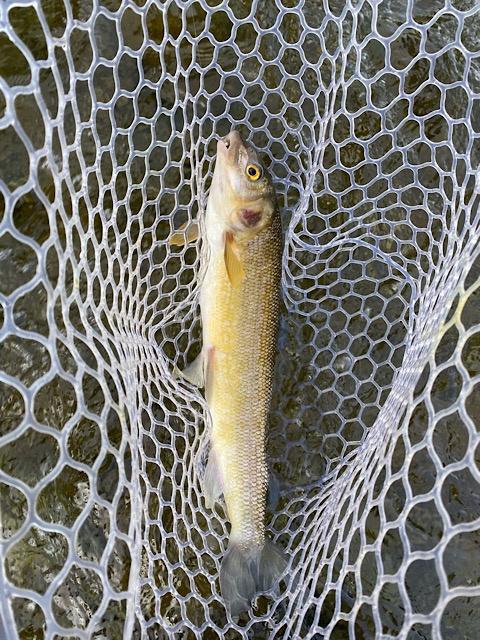 Day 4- we started behind the house and the fish were on again. It started with another gorgeous cutty and other great quality fish. 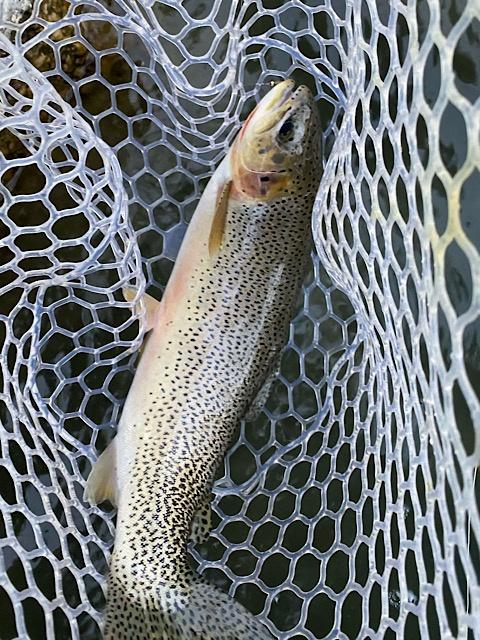 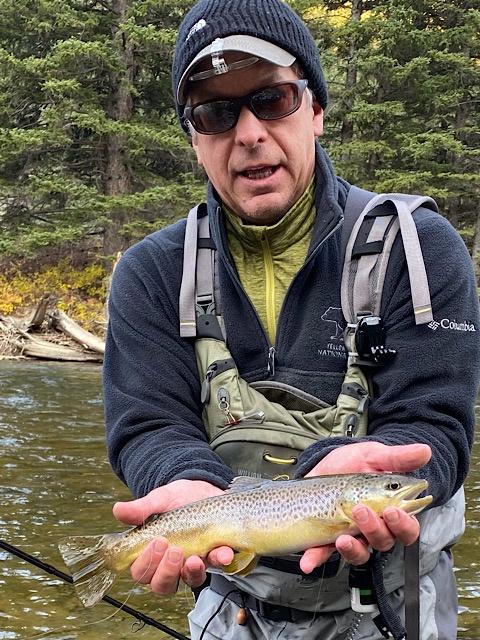 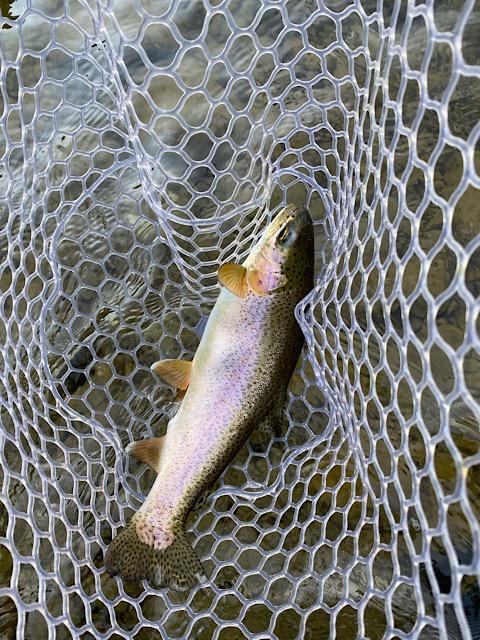 We then headed out in search of some new water. We tried inside Yellowstone and on the outskirts of the park but never found the water we were looking for so we went back to the house and picked more nice fish. 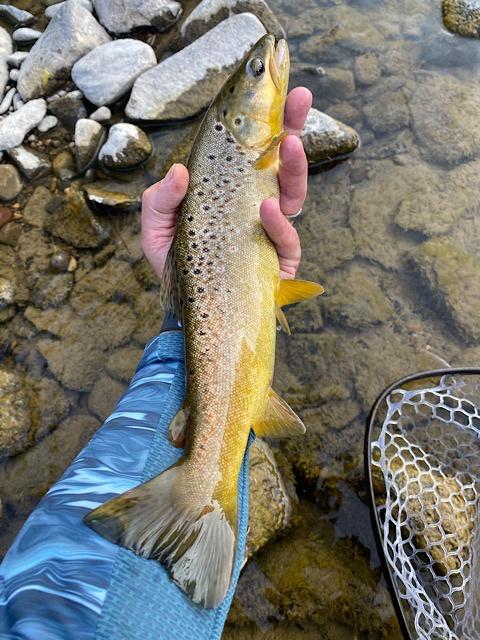 We headed out on our own again to fish between the lakes and another spot on the upper Madison. Again a slow pick of fish but managed a few nice ones in very technical pocket water. 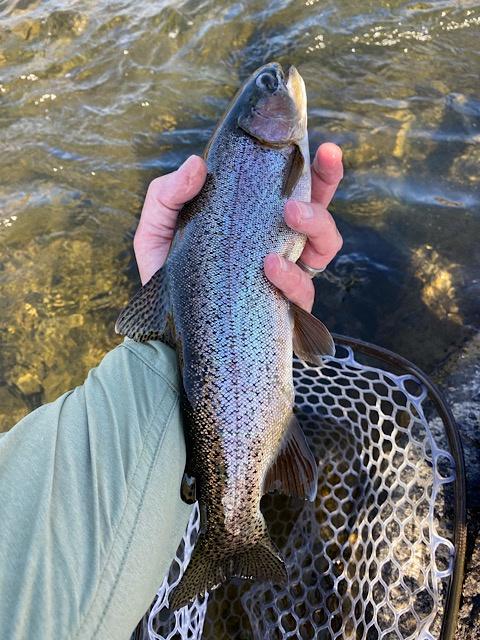 After that journey I got a 3 more rainbows behind the house. 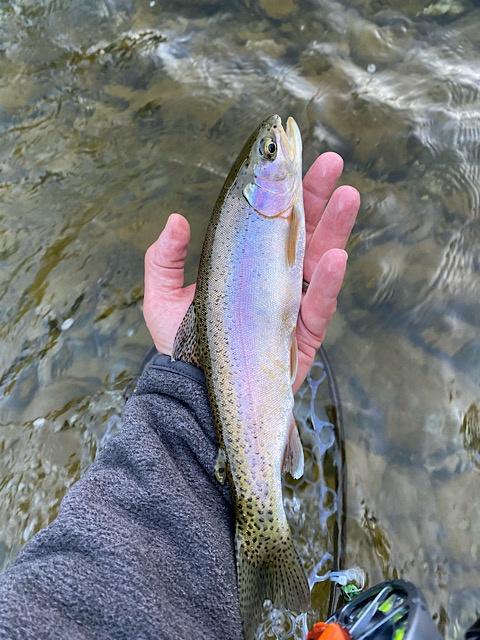 Our last morning to fish. Colin slept in and I stayed behind the house for an hour or so. I got 3 more nice rainbows in an hour and a few whitefish. 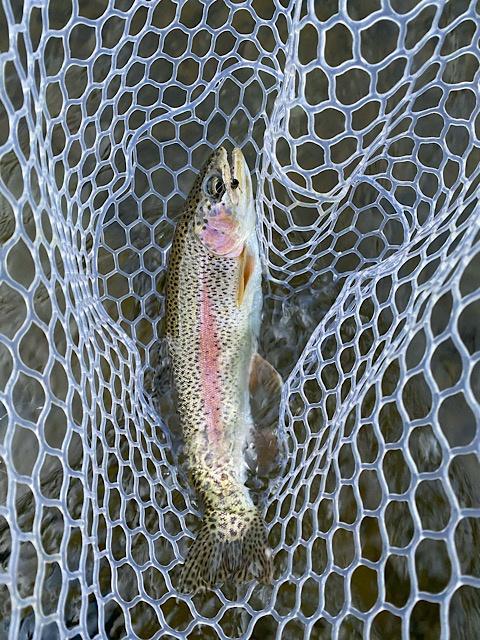 To finish the trip off I threw a big streamer for the last half hour hoping for a big fish. I had two hits and then finally hooked up. I felt the weight and the fish took off downstream screaming drag. I backed out of the run and followed it down. After an amazing fight on my 6 weight, I put another great brown in the net that was about 17.5 to 18 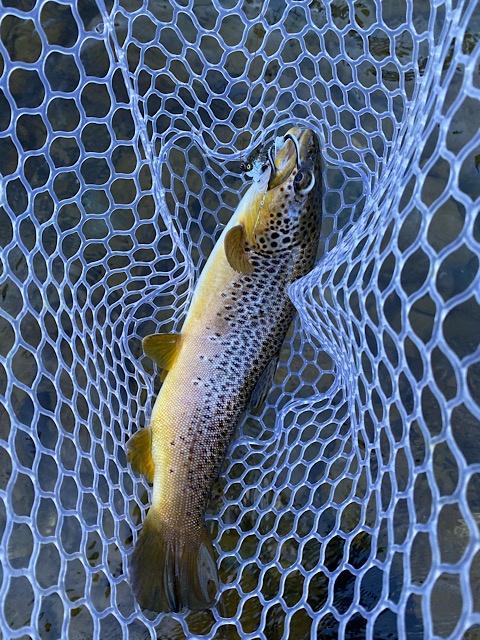 This fish was definitely fattening for the winter and coloring up to spawn. 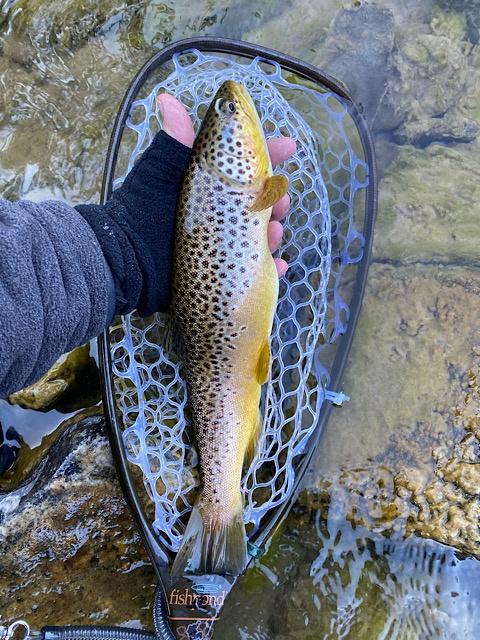 All told I landed about 45 trout, (all of which were caught on flies that i tied, except when we were with the guide), we had perfect weather to almost 70 degrees mid day, saw beautiful scenery and forged a great friendship with a former work friend. Were already talking about planning next years trip. Its going to be tough to beat this one.

Remember when you trained to do the Tour de Cure? You just can't go do 35 miles on a whim. My lesson learned is to do lots of pre hiking at home before taking this trip.

That looks like a heck of a trip! Do you mind sharing the address of the house? I stayed in Island Park in a house off 20, but my FIL picked it because it was close to West Yellowstone, but if I ever go back out there I'd like to be on a river next time.

Those float boats are really cool, but pricey at about 9K. Those whitefish fight pretty good, I enjoyed catching them.

What's the bourbon? I found some Weller special reserve in Bozeman.

Nice trip and thx for sharing

That looks like a heck of a trip! Do you mind sharing the address of the house? I stayed in Island Park in a house off 20, but my FIL picked it because it was close to West Yellowstone, but if I ever go back out there I'd like to be on a river next time.

Those float boats are really cool, but pricey at about 9K. Those whitefish fight pretty good, I enjoyed catching them.

What's the bourbon? I found some Weller special reserve in Bozeman.

Hi Junger, its 50555 Gallatin Rd, Big Sky. You can find it on VRBO.com. Hopefully if it does get sold, the new owner will keep it as a rental property. I would definitely go back there. The beauty of it is that even if youre doing family events, you can get a few hours on the river right behind the house. According to a guy that lives in the area, its also one of the best stretches on the river.

It was Bulliet bourbon. The store in Big Sky had a somewhat limited selection and both of us like Bulliet. I find it a very drinkable bourbon.

Remember when you trained to do the Tour de Cure? You just can't go do 35 miles on a whim. My lesson learned is to do lots of pre hiking at home before taking this trip.

Its a great point. Between a crazy work schedule and not fully understanding the intensity of that hike I was simply not prepared.

It was Bulliet bourbon. The store in Big Sky had a somewhat limited selection and both of us like Bulliet. I find it a very drinkable bourbon.

Thanks for the info. Yes, whiskey options in Big Sky and West Yellowstone are limited, and very overpriced (Lagavulin 16 for $150 in West Yellowstone!), I won't make the mistake of not getting a decent bottle in Bozeman again.

So here's a spot where I'm itching to get back to: https://goo.gl/maps/WpcBJtRW1nUGm5jv9

On my trip there this summer, I mistakenly waded in at the Big Spring launch area. It is no fishing from the spring to the Henry's Fork lake outlet, which is where the google pin I linked is. There are some BIG trout in there because there's no pressure. In my  very brief illegal wading/fishing session, I caught a huge rainbow, hooked another that got off, and saw at least 20 more before I was yelled at by kayakers.

What a beautiful place!  Great trip and report.  Congrats!

So here's a spot where I'm itching to get back to: https://goo.gl/maps/WpcBJtRW1nUGm5jv9

That spot is only an hour and 25 minutes from the house we stayed in. One of the guys in the fly sho- was talking about Henrys Fork as a possible option. Sounds like its similar to the Madison where fish can move in and out of the lake(s). Those fish grow big in a hurry.

Cool, thanks for sharing.

Wow, what a trip!! That is on my bucket list.