The stars and weather aligned for a couple of very memorable trips this past week. My brother and I had scheduled a return trip to Montauk do do some blackfish fishing this week and so I booked a striped bass trip out of NJ to maximize my travel. Tuesdays striper trip was out of New Jersey with my brother Michael, his son Derek and our cousin Lou. We traveled on Monday and stayed at Lous shore house in Avon NJ. The trip started beautifully with an amazing dinner and drinks Monday evening. We were at the dock bright and early on Tuesday to chase bass.

We didnt know what we would find since there was a bad noreaster last weekend and the ocean was just barely settling down on Monday. Tuesday was beautiful though and we cruised out of the inlet and started to see some life a couple of miles out. The further we went the more gannets and gulls we saw. Just short of the 3 mile limit we came across a nice pod of bass. We threw shads and jigs and it wasnt long before we were into fish. My first one was my best of the day and pulled the scale to 20 lbs. 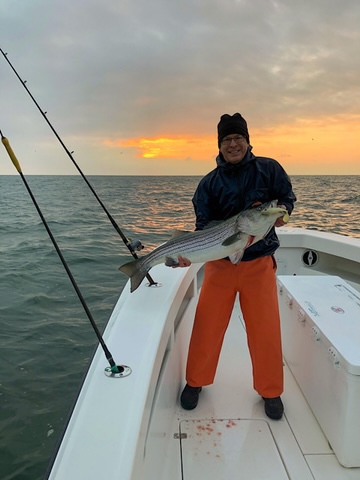 We continued to pick away at fish with regular bites for the next hour. Brother Michael with a nice one. 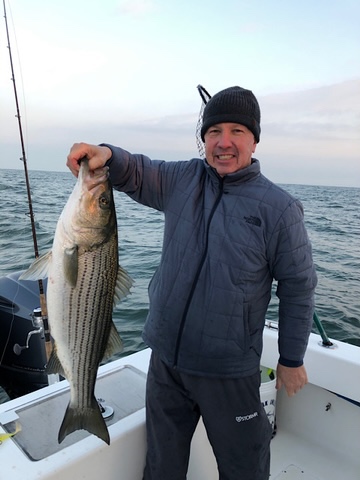 Unfortunately the big pod of fish moved out beyond the 3 mile line into federal waters and were off limits to us. We did manage to still find fish inside the line but they were nowhere near as thick and the fishing became a slower pick. We caught our limit and released a bunch of nice fish including one that may be a Dereks personal best at 26 lb. which was successfully released. 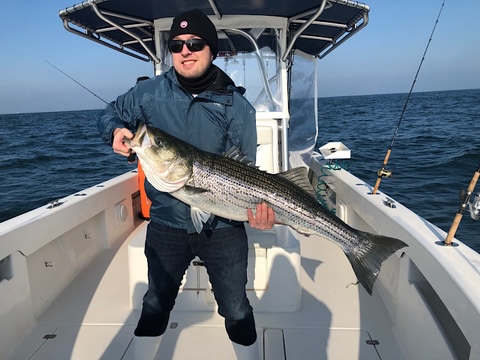 By lunchtime the bass all but disappeared. The only option would have been to troll but we opted not to. The captain brought a bucket of green crabs with him so we thought we would try for blackfish instead to warm up for Thursdays trip. Unfortunately, because of the storm, the bottom must have still been churned up because the tog were just not biting. I think we only landed 8 to 10 fish in 2 hours with only 2 of them being keepers. We called it a day and headed back to the dock. All in all it was a great trip with family. Were already planning something for late spring.

Heres the crew with a few specimens. 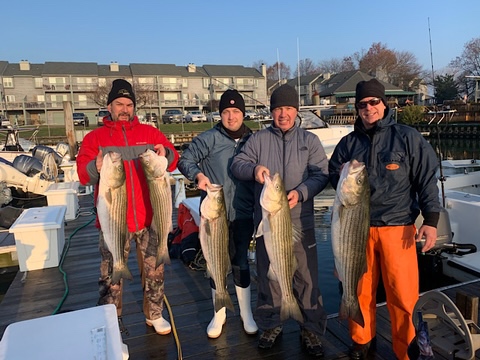 Wednesday was a travel day. We connected with my brothers friend Brian and the 4 of us were staying in Montauk Wednesday night. On Thursday we would meet up with my long time friend Chuck and his buddies Rich and Chuck who all live on Long Island and traveled out in the AM. The NJ crew enjoyed another great dinner with drinks and a healthy ration of ball breaking. We had such great laughs over dinner that any fish caught the next day would be a bonus.

We were at the dock at 4:45 and lines cleared by 5:00. It was still blowing pretty hard but the forecast was for lighter winds in the afternoon. We hadnt even cleared the inlet and we were pounding pretty badly heading right into the wind. We ran north to the Rhode Island coast knowing we would find protection up there. We ran slow and the ride got better and better. 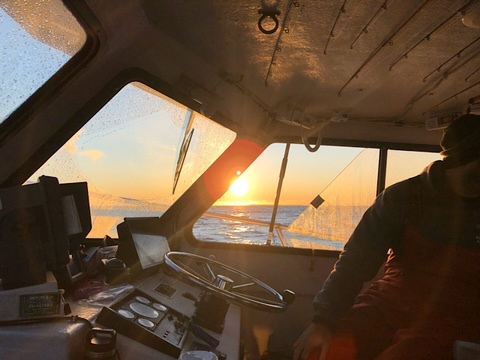 It took us almost 2 hours to get to the grounds but we were still the first boat on the reef. We dropped anchor, adjusted a bit and Captain Danny of the Double D said lets do it. I dropped a crab in the water and within 15 seconds was getting hit. I didnt get a hook set into that fish and in less than a minute, Chuck and Rich were pulling fish over the rail. My next drop I had my first fish. It was pretty much lights out fishing for the entire day. We had our limit of 32 keepers (4 per man plus the captains 4) by 8:00 am. Through the day we had a mix of fish from shorts to 9.5 lb. while we didnt break 10 lbs, it was one of the best days togging Ive ever had. We released many fish in the 5 to 9 lb range. The best part is we were only in 60 feet of water and fishing with light sinkers or, better yet, jigs tipped with crab on spinning rods. I only fished jigs for tog once before and it was amazing. We lost count on how many fish we brought over the rail.

Here are some samples. 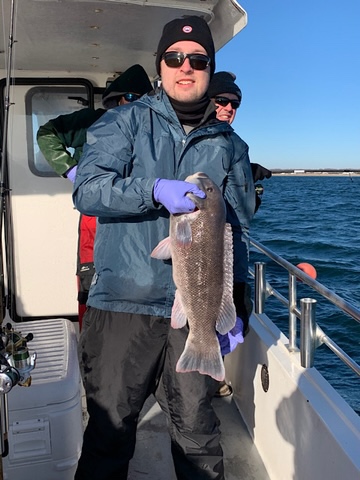 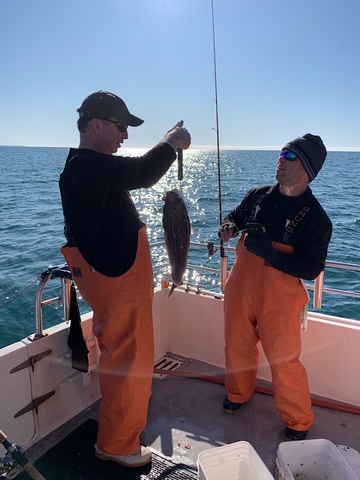 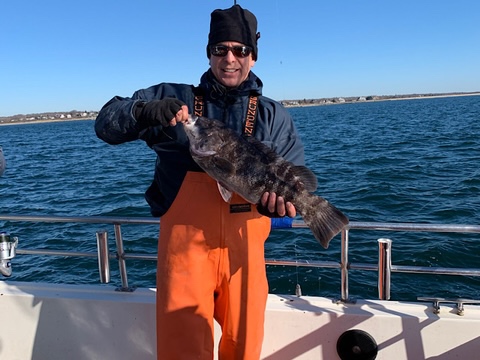 Rich with the pig of the day, although I think there were 2 or 3 around the same size 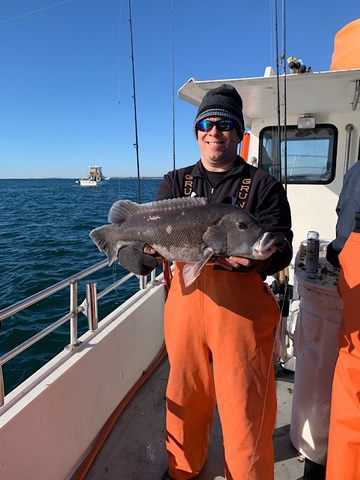 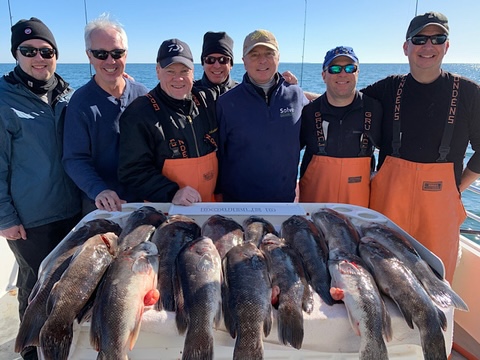 Thursday night I stayed in New York State and helped my brother work on his lake house and boat. As I was ready to head home I put the GPS on only to find that traffic was already bad. So rather than fight route 95, I went through PA and made a detour to the Tulpehocken Creek, a trout stream I had never fished before. I had a solid hour and 20 minutes on the water until it was took dark to tie a knot. After throwing big stuff in the salt for two trips, I was definitely off my trout game but I was able to find a deeper run holding fish and caught and released one holdover rainbow and had 1 other definite hit. The stop was successful as I now have another River to hit and I avoided rush hour. 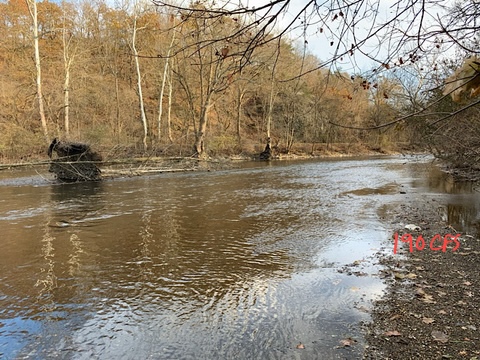 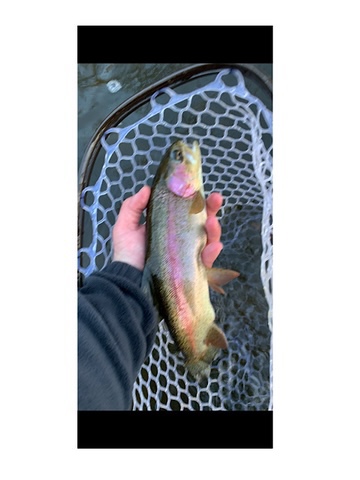 While exhausted and achy this weekend, I had the best week with family and friends, filled the freezer for the winter and had some damn good fishing to boot.

Awesome report, doesnt get better than lights out fishing with family and friends!

Can I be a member of the extended pacemaker family?  Awesome report....really!

Can I be a member of the extended pacemaker family?  Awesome report....really!

I would definitely do a road trip if we could put a crew together from here. Its not for everyone, but tog fishing is super fun. Challenging, but fun. They fight super hard, they can frustrate you and they are tasty. My go to places are Montauk, New Jersey and Ocean City, MD. This spring Ill put a post up to see if theres interest for next fall. 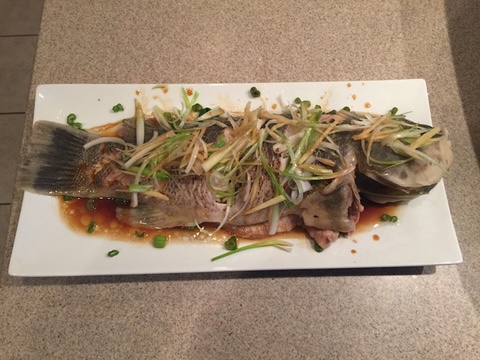 Great report! I especially like that trout river scene.

My go to places are Montauk, New Jersey and Ocean City, MD. This spring Ill put a post up to see if theres interest for next fall.

Do you fish at the bulkhead in OC for tog? I've always wanted to try that but don't have heavy gear.

Do you fish at the bulkhead in OC for tog? I've always wanted to try that but don't have heavy gear.

I havent. My OC togging is on a charter fishing offshore wrecks and reefs. That area holds some BIG tog. Got a trip planned 1st week in January, hope to have a report to post.

ok....you talked me into it.....so little arm twisting.  I'm in for fall fishing next year with a crew from here!