I got out solo to fish pre-cold front.  I was on the water about 7:30am.  Cloudy and a little breezy with air temps starting in the upper 40's and rising to about 60 degrees.  Water was just about 50 degrees.  I tried my walleye spot first, but no bites.  I headed way up to where Ernie and I fished on Tuesday.  There was a boat in the hole I wanted to fish, so I tried the tail end of an island with no bites.  Water was way clearer than Tuesday upriver.  The other boater moved, so I worked my way back to the hole and worked it for close to an hour.  Conditions were different, with a slight drop in level and clear water.  No bites.

I decided to move downstream and try the creek mouth.  I am glad I did because I got bit immediately by a brightly colored 15" LM. 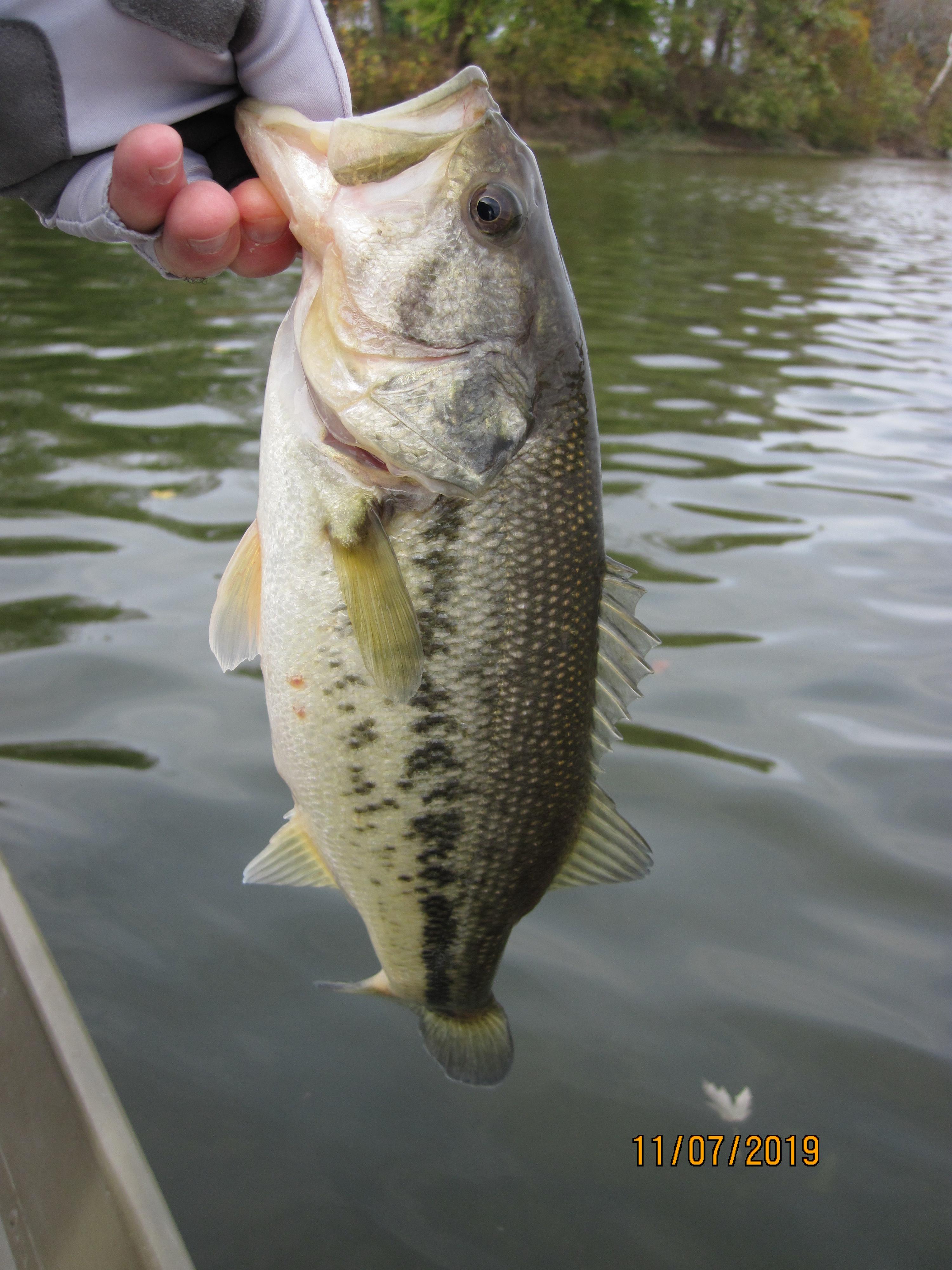 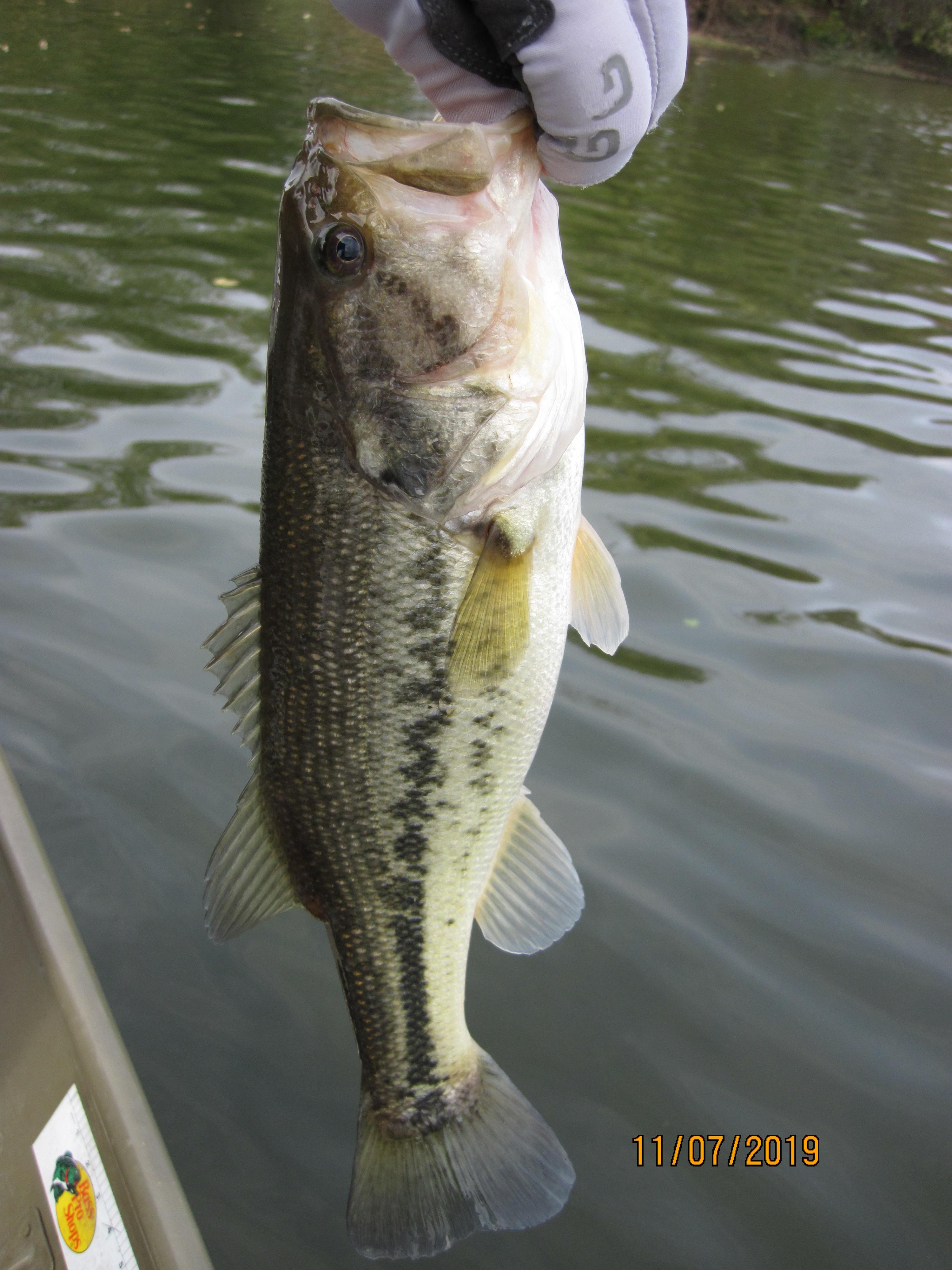 Soon after I hooked a better one that was 17" and chunky. 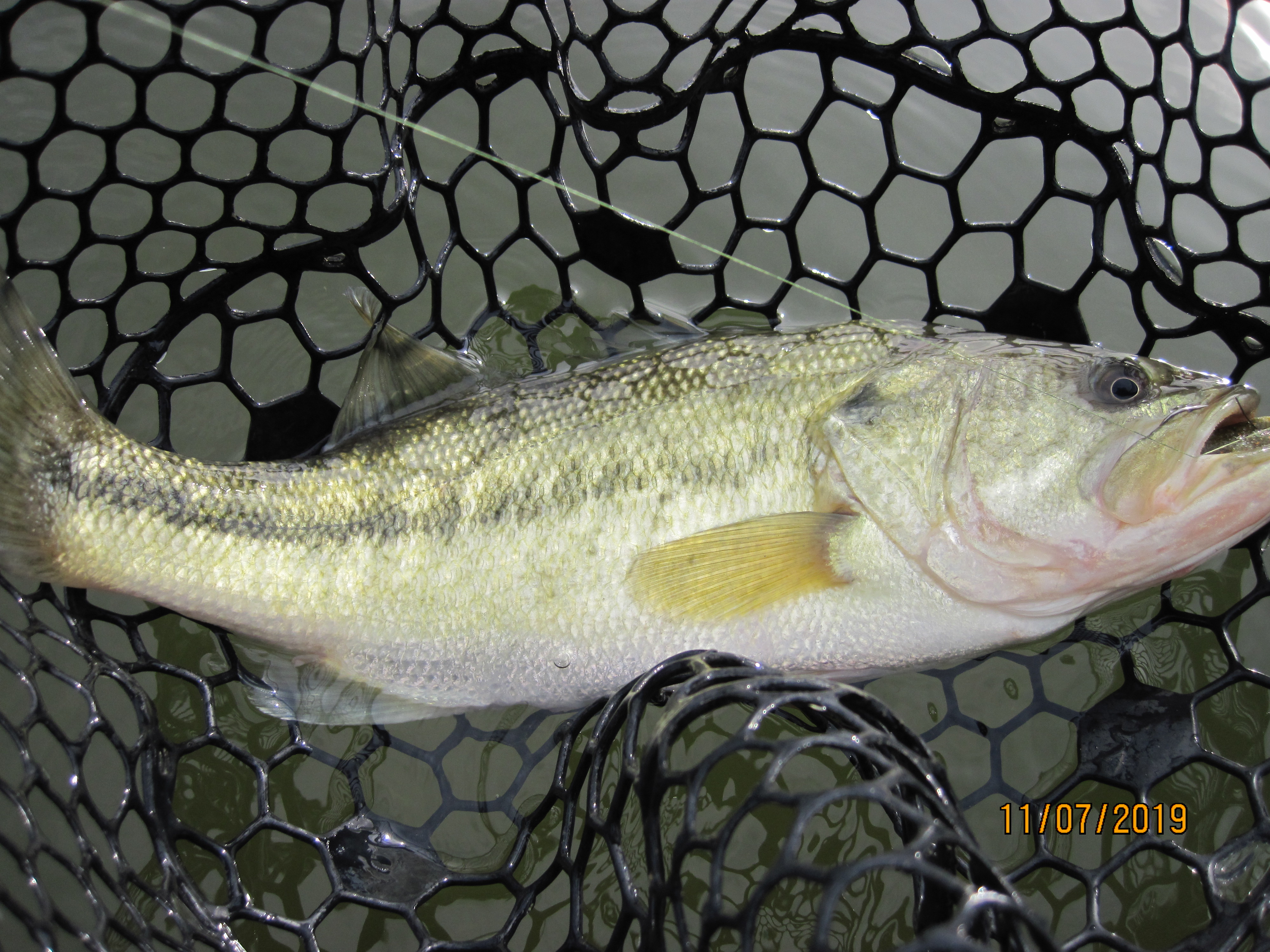 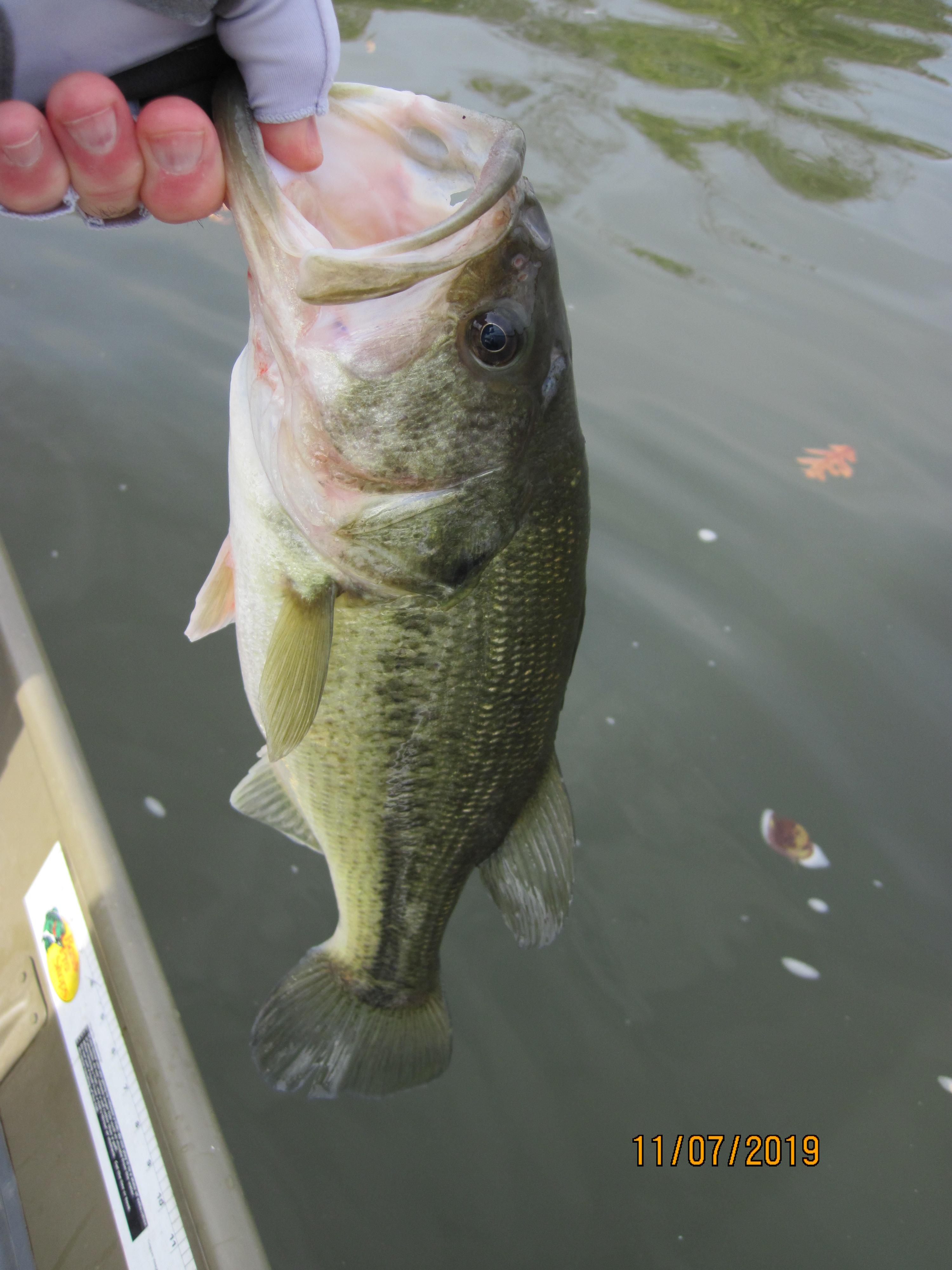 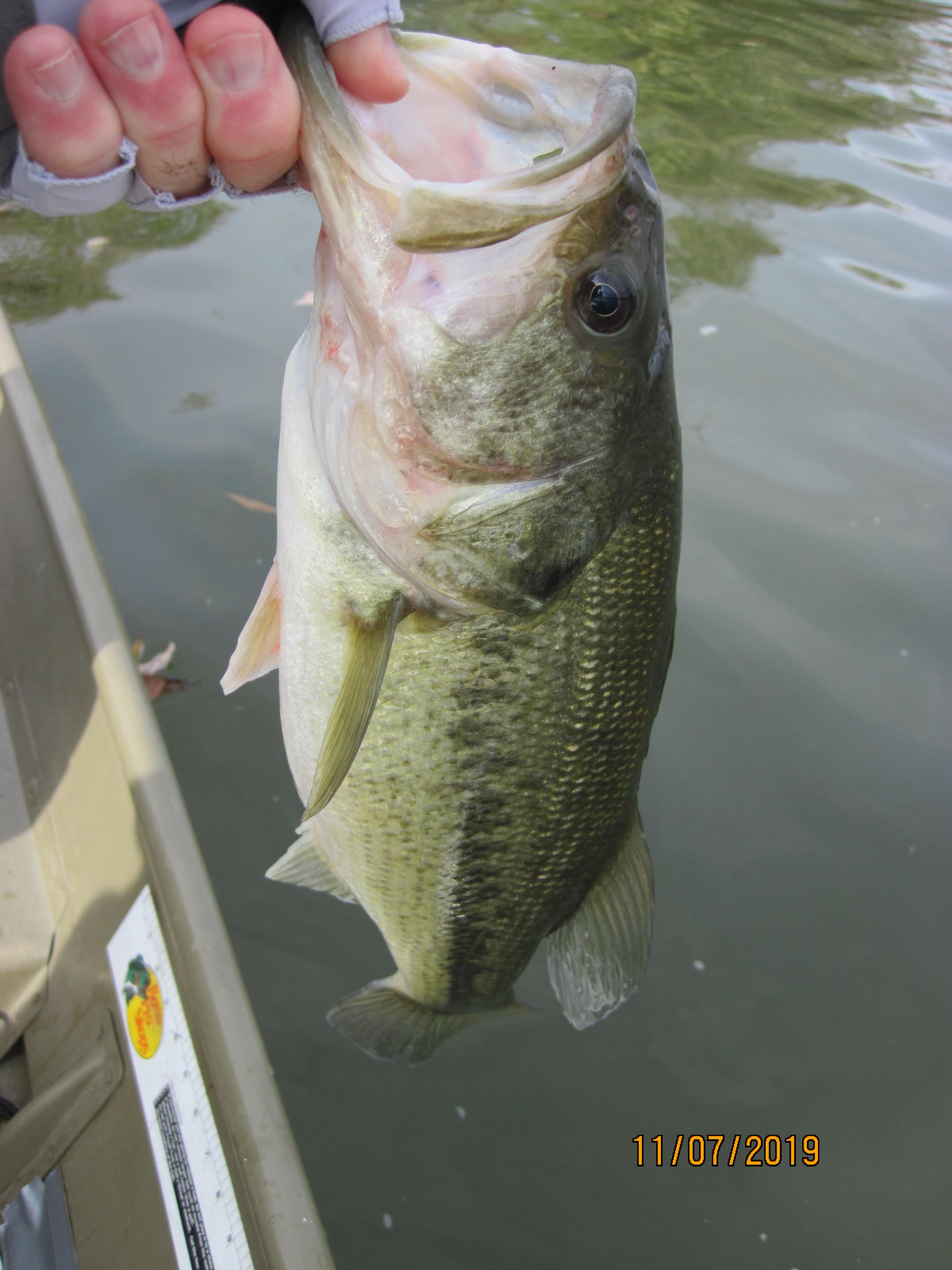 I caught a smaller one and then another 17"er that was long and skinny. 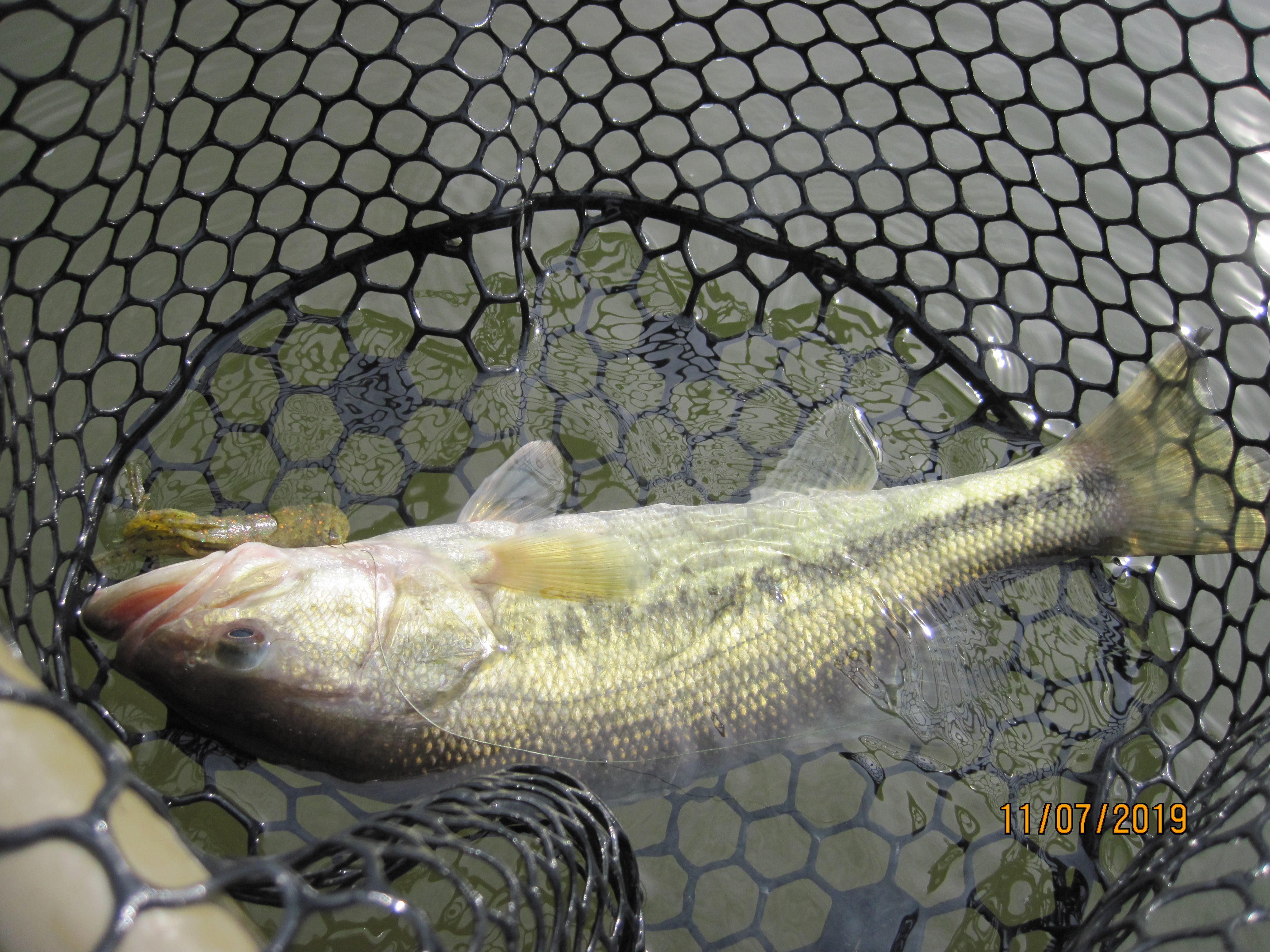 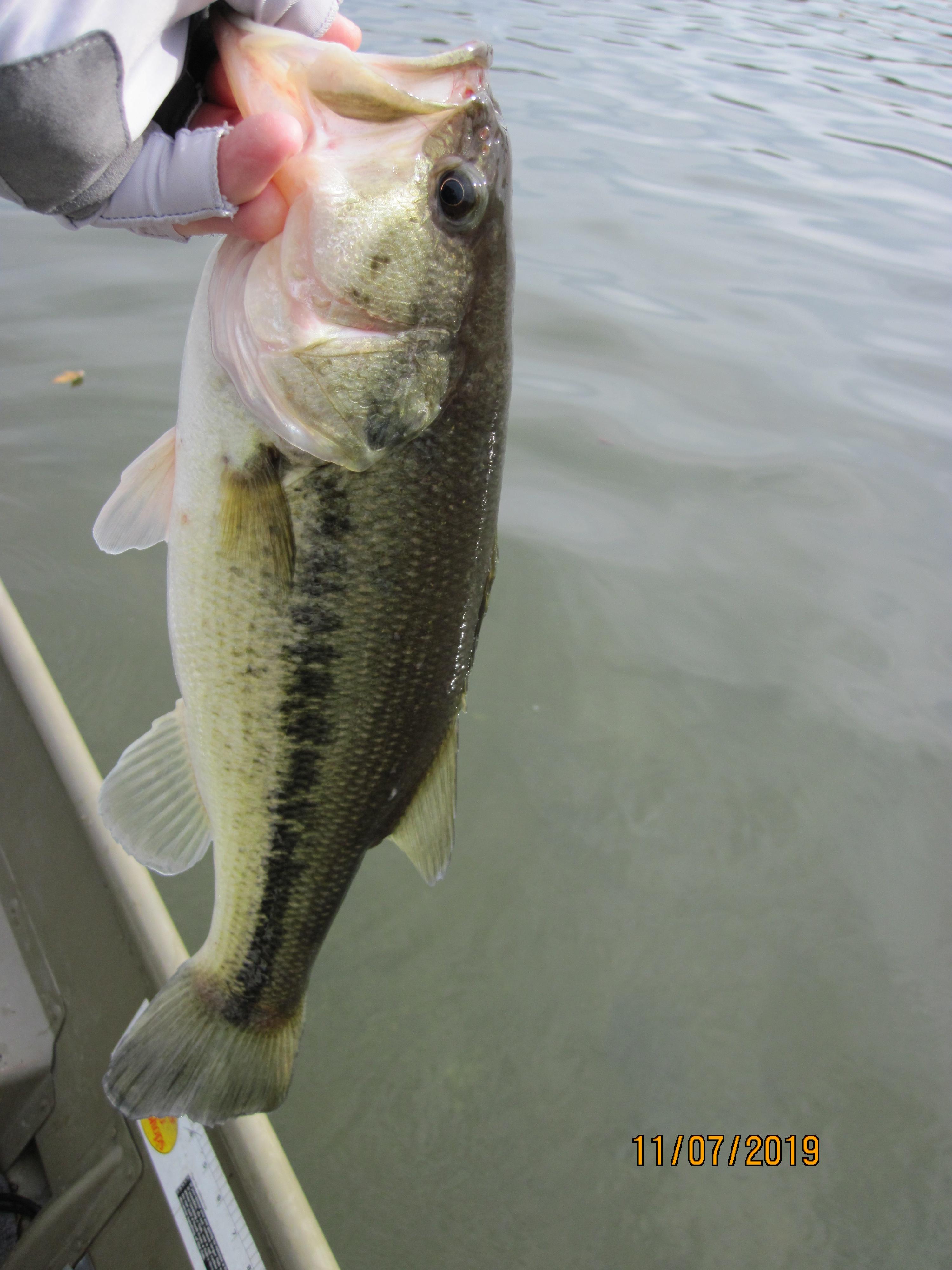 The tube bite slowed and I tried a dropshot ned rig with 2 ned type baits.  I caught one smaller LM on the dropshot hook.  I got snagged a few times and think I scared any fish that were left.  5 out of that hole was good though.  I tried to run up the creek, but the water was low and I hit a couple rocks.  I worked my way back slowly and ate lunch in the creek.

I tried the hole again, but the wind was working against me and I got snagged again, so I moved back downstream  I tried some rocks and wood on the MD side, but it was heavily stained there and I got no bites.  I tried the island rocks, but nothing there.  I tried to float the island, but it was too low and clear there.  I finally went back toward the MD side where there are a couple deeper holes.  I downsized to my clear water grub and was casting around quite a bit.  Just as I was about parallel to the next island, I was almost slow dragging the grub and I hooked a dink smallie.  It was maybe 10 inches long, yellowish and had been eating pretty well,  I was happy to catch at least one smallie.  The rain was approaching and it was about 3:00pm, so I headed back to the ramp.  I made it home before the rain really started.

LMB now rule the UP!

Good job getting some!

So where are all of these largemouths coming from all of a sudden? And where did all the smallies go to? Strange...

So where are all of these largemouths coming from all of a sudden?

They have always been there...

And where did all the smallies go to?

The largies come in from the creeks.  Some stay.  They used to be more prevalent and there were big ones in the river.  I hope this is a sign that they are re-establishing in the main river.  Maybe not though.