With the tough fishing in the local area, I reached out to River Smallies member Jeff Z (Jezur67) who lives in WV to see if I could try some of his waters.  We planned for a trip in September or October and kept it very flexible, based on conditions and availability.  We were going to fish the Greenbrier or the New from his raft, but ended up with the New River Gorge area being the best option.  Since it is a 4.5 hours drive for me and the river is about 2 hours from where he lives, Jeff found a cabin rental that was directly on the river and turned out to be perfect.

I got up early and made it to our meet up in Beaver, WV at 9:30am.  We dropped my Highlander off at the take out (right at the cabin!) and drove to the put in.  We saw a chipmunk and 7 turkeys cross the road on the way.  Here is the view from the ramp. 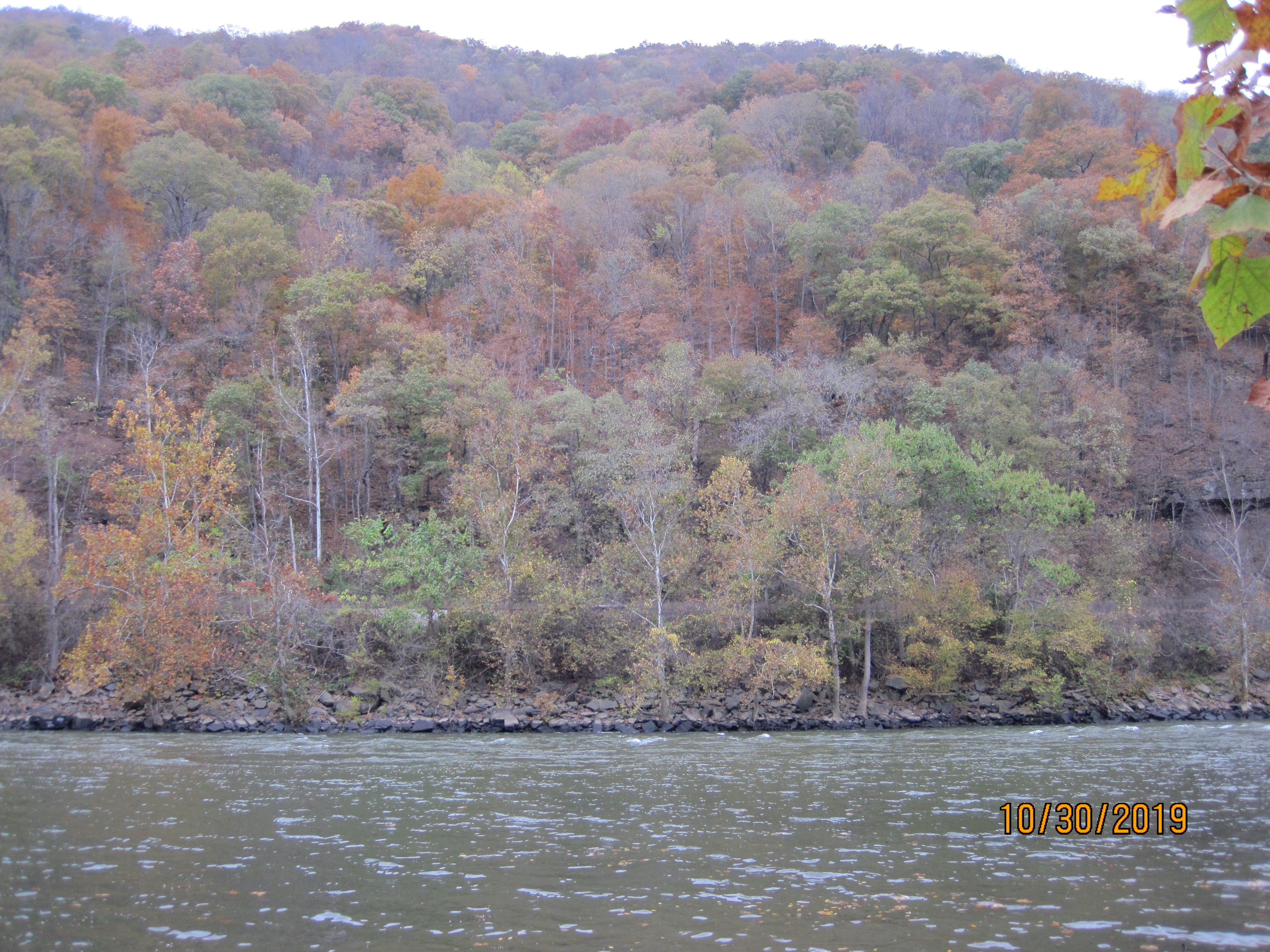 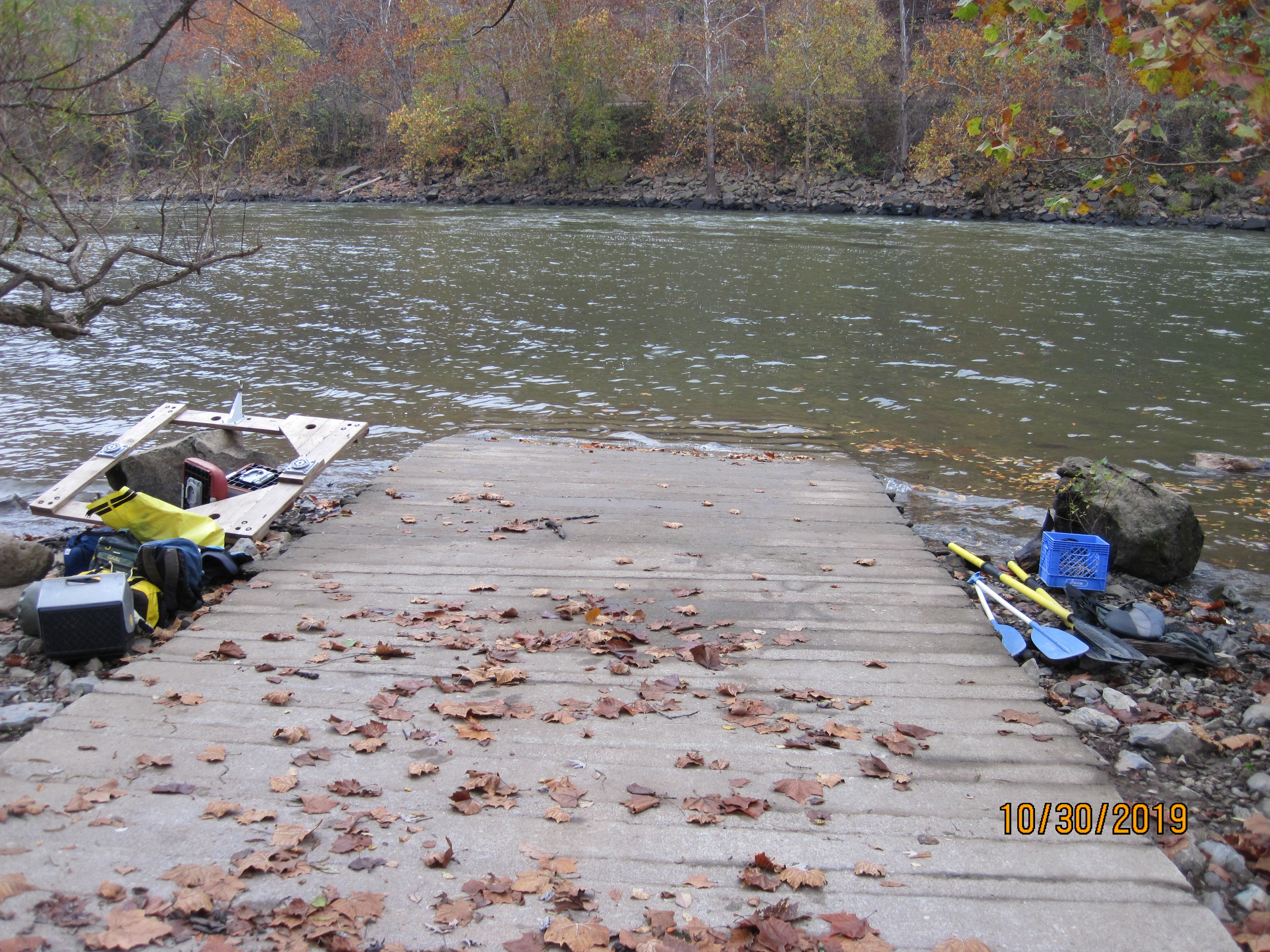 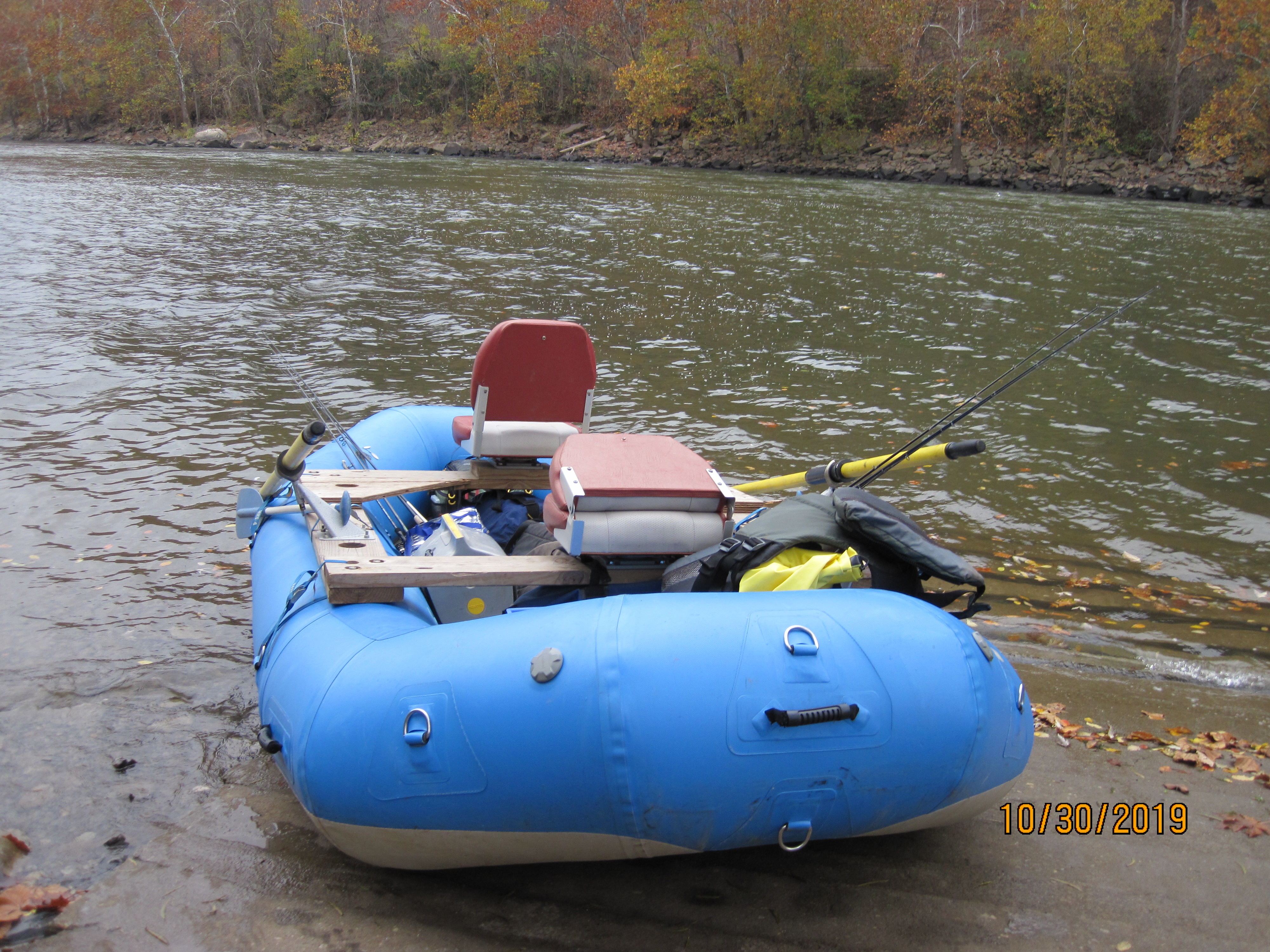 The scenery was beautiful with the leaves being near peak and the water was dropping, but a perfect color.  The forecast was rain off and on with a big storm coming Thursday.  That made for extra gear in the boat to deal with the conditions.  Jeff's boat was perfect and he is very good on the oars.  With the rain I did not get many pictures.  Fishing was slower than expected, but the environment made up for the lack of action.  Truly epic. 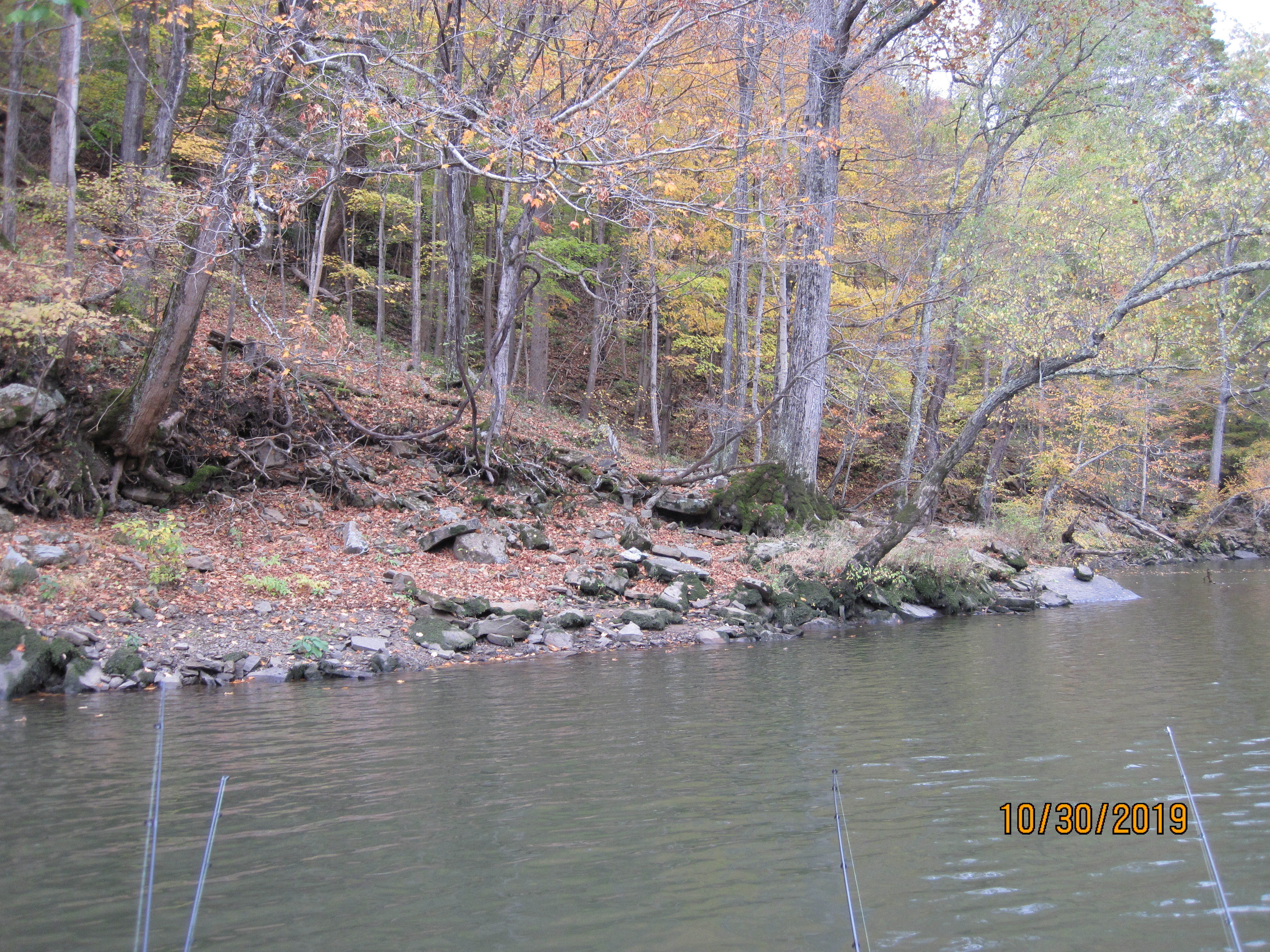 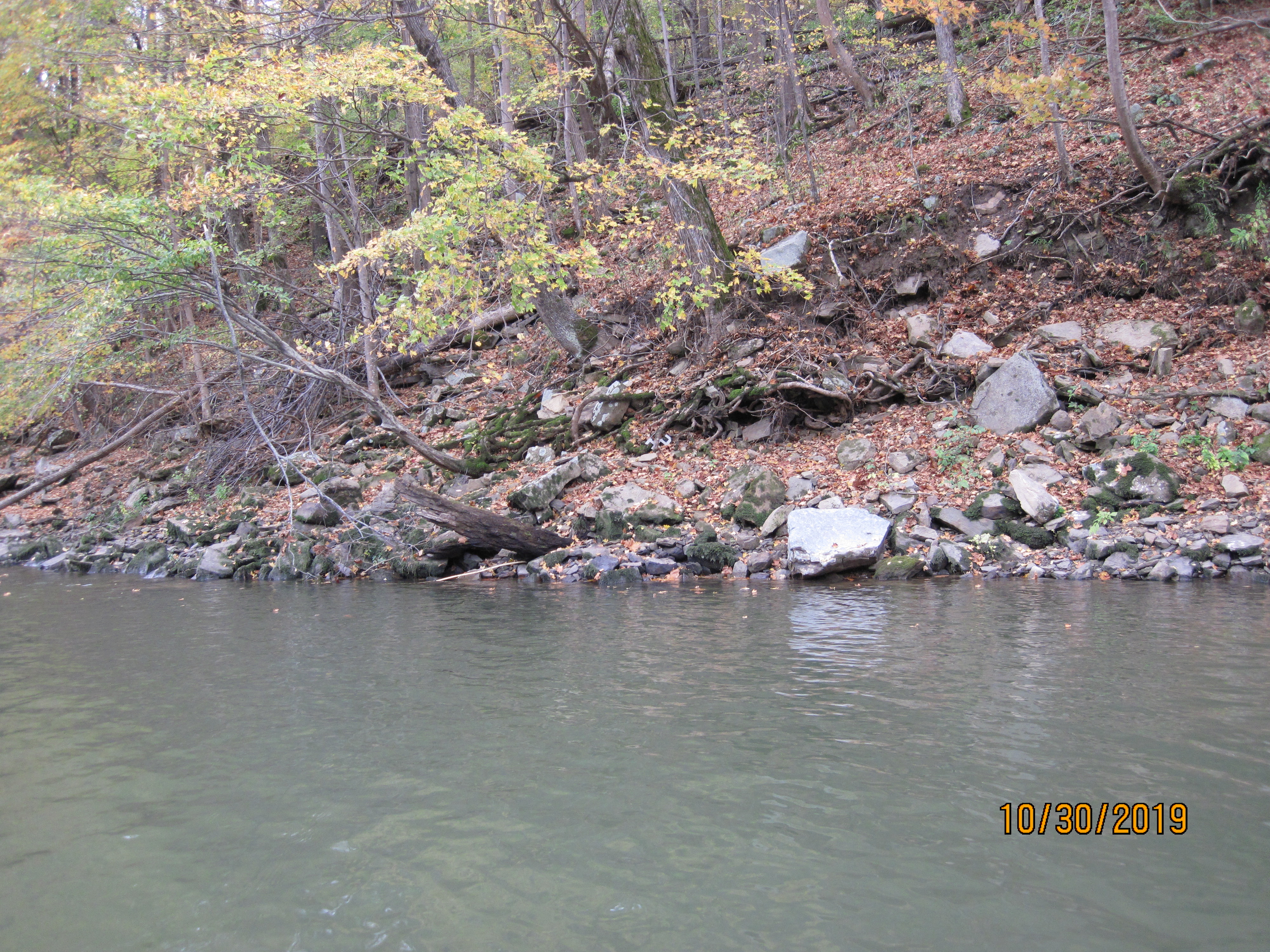 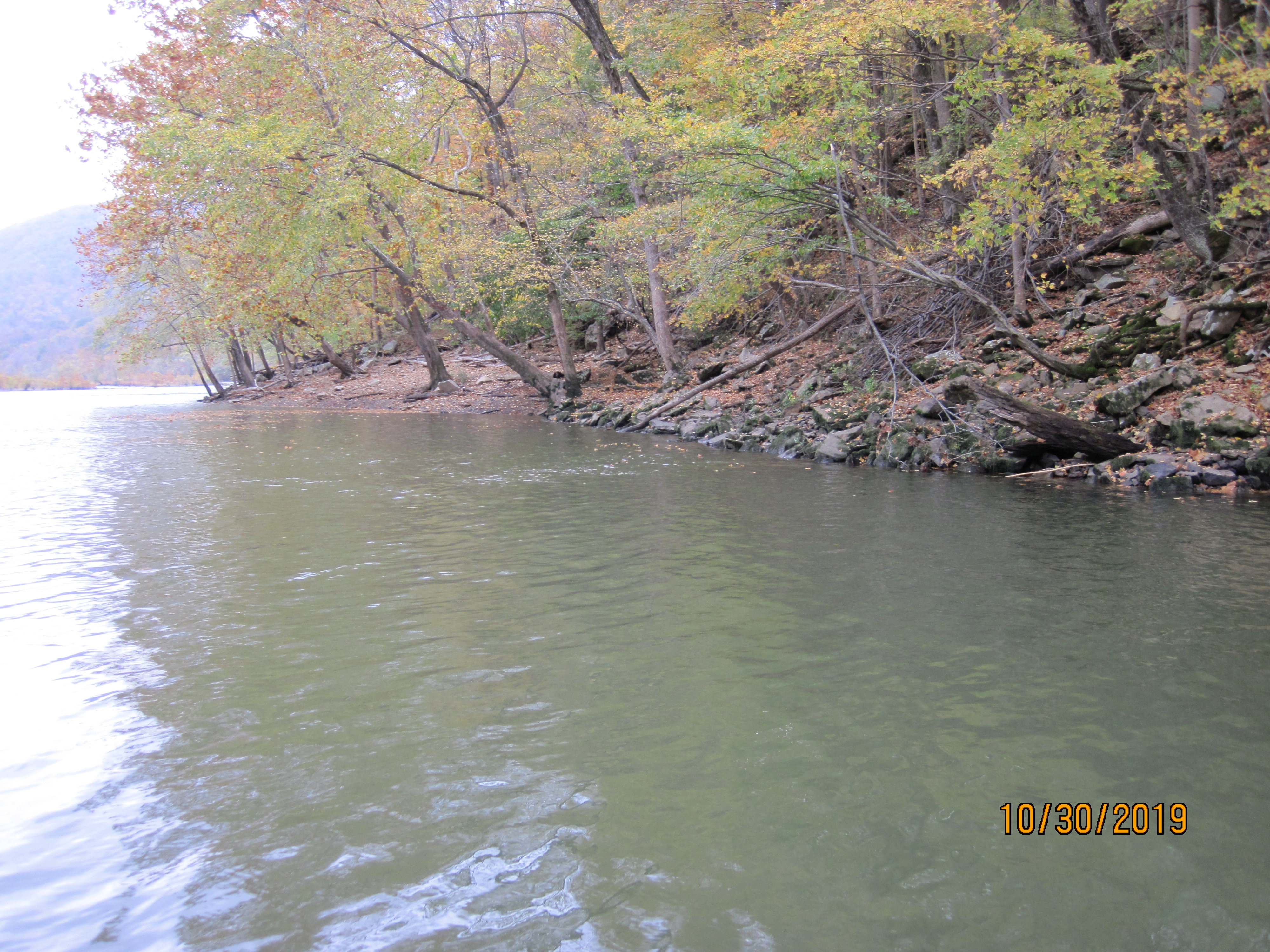 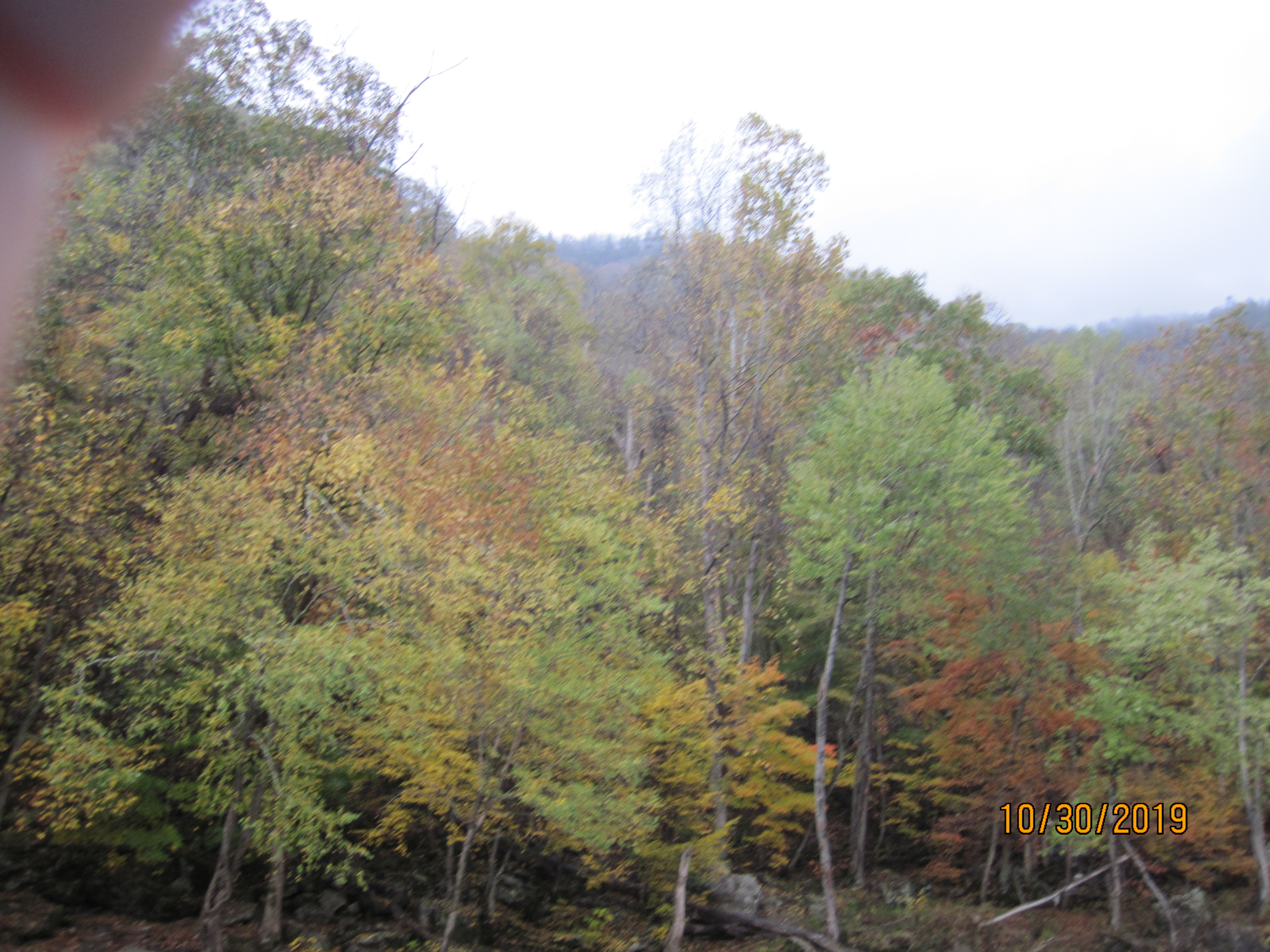 Jeff got the first fish on a spinnerbait.  It was small, but came pretty quick into the trip.  I think he caught one or two more and I finally got one on a swimbait. 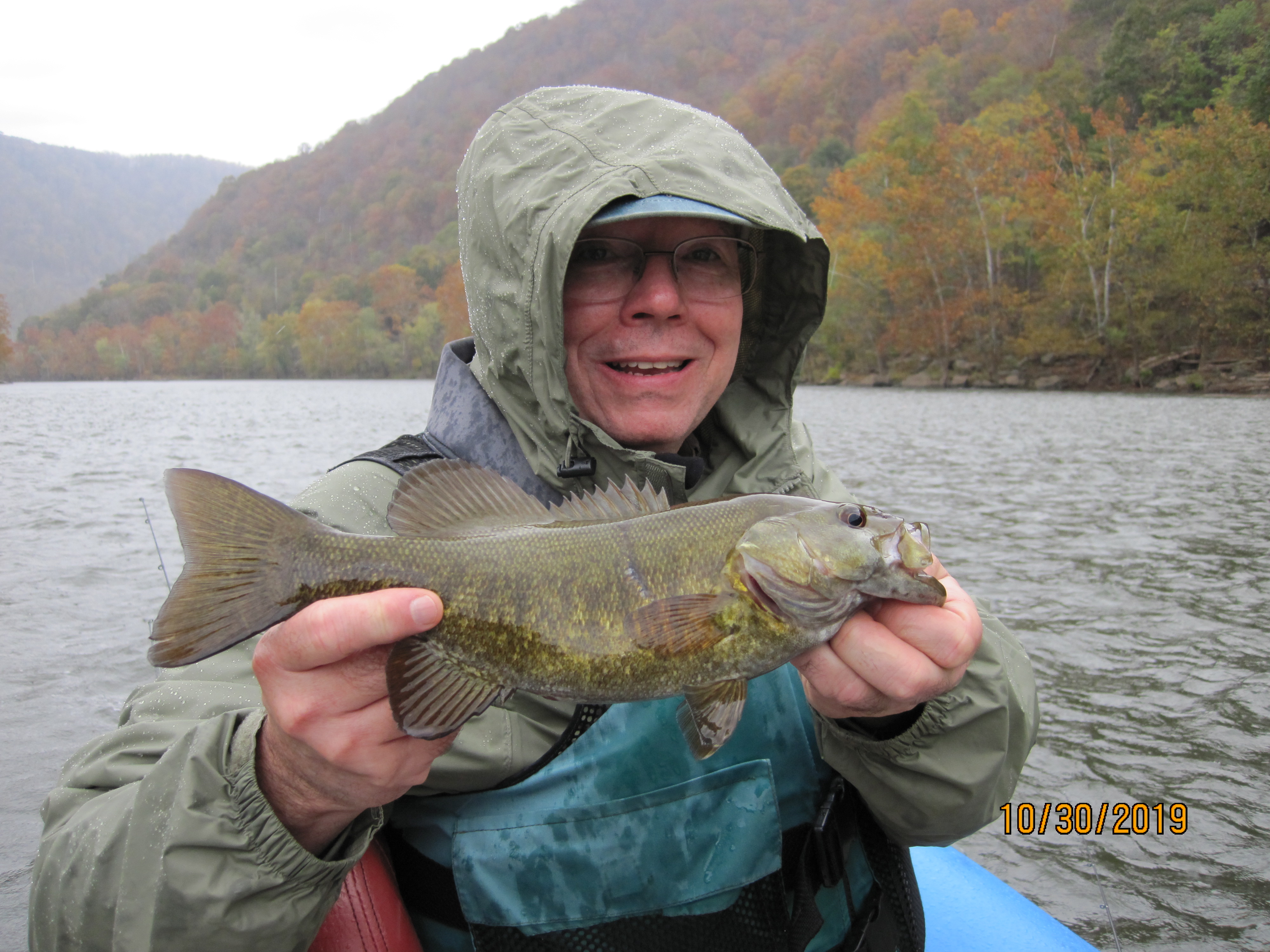 Jeff caught fish on a ned rig, a jig and a swim bait.  Most of our fish were small and it seemed to be one fish only per spot. 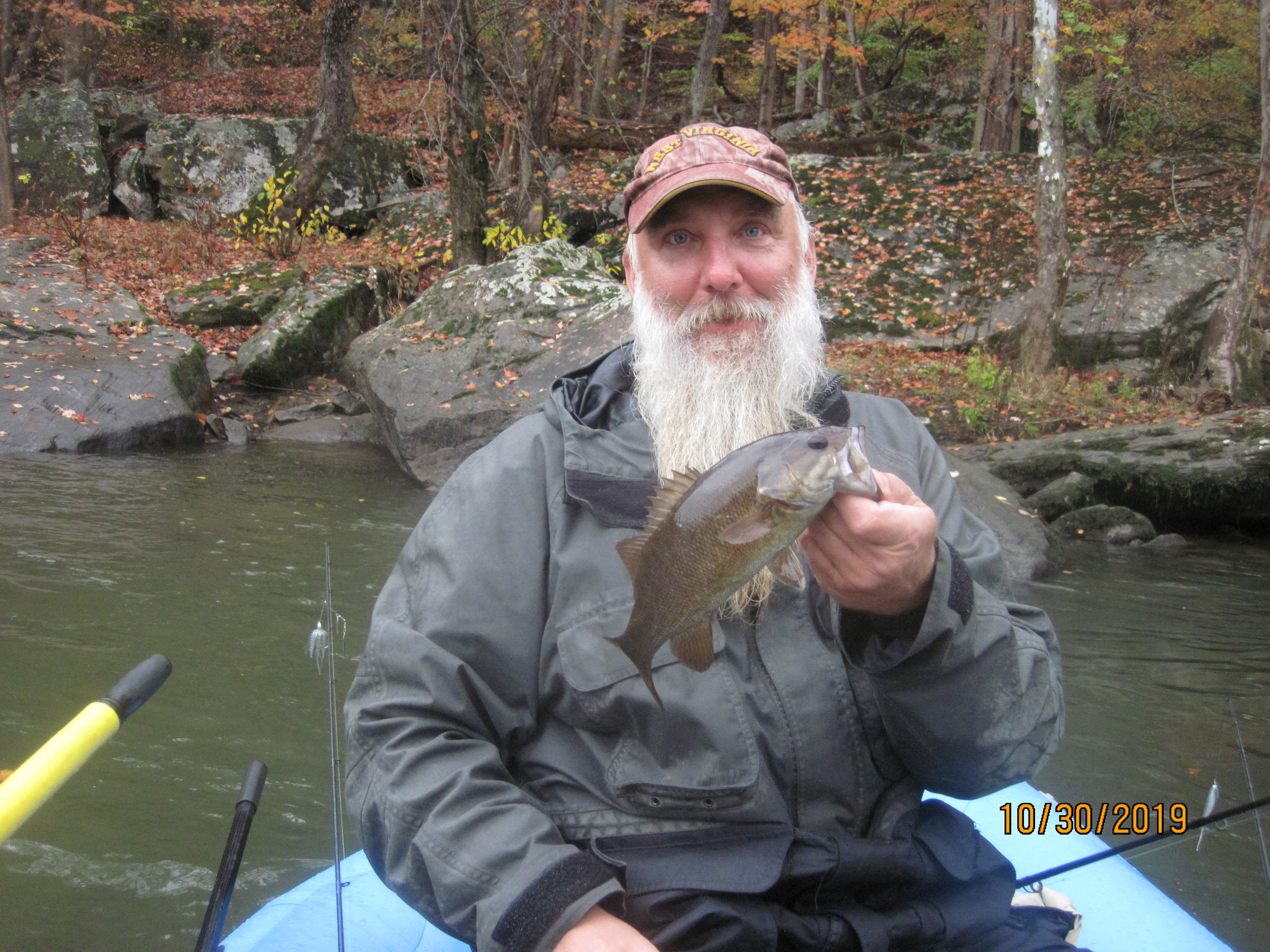 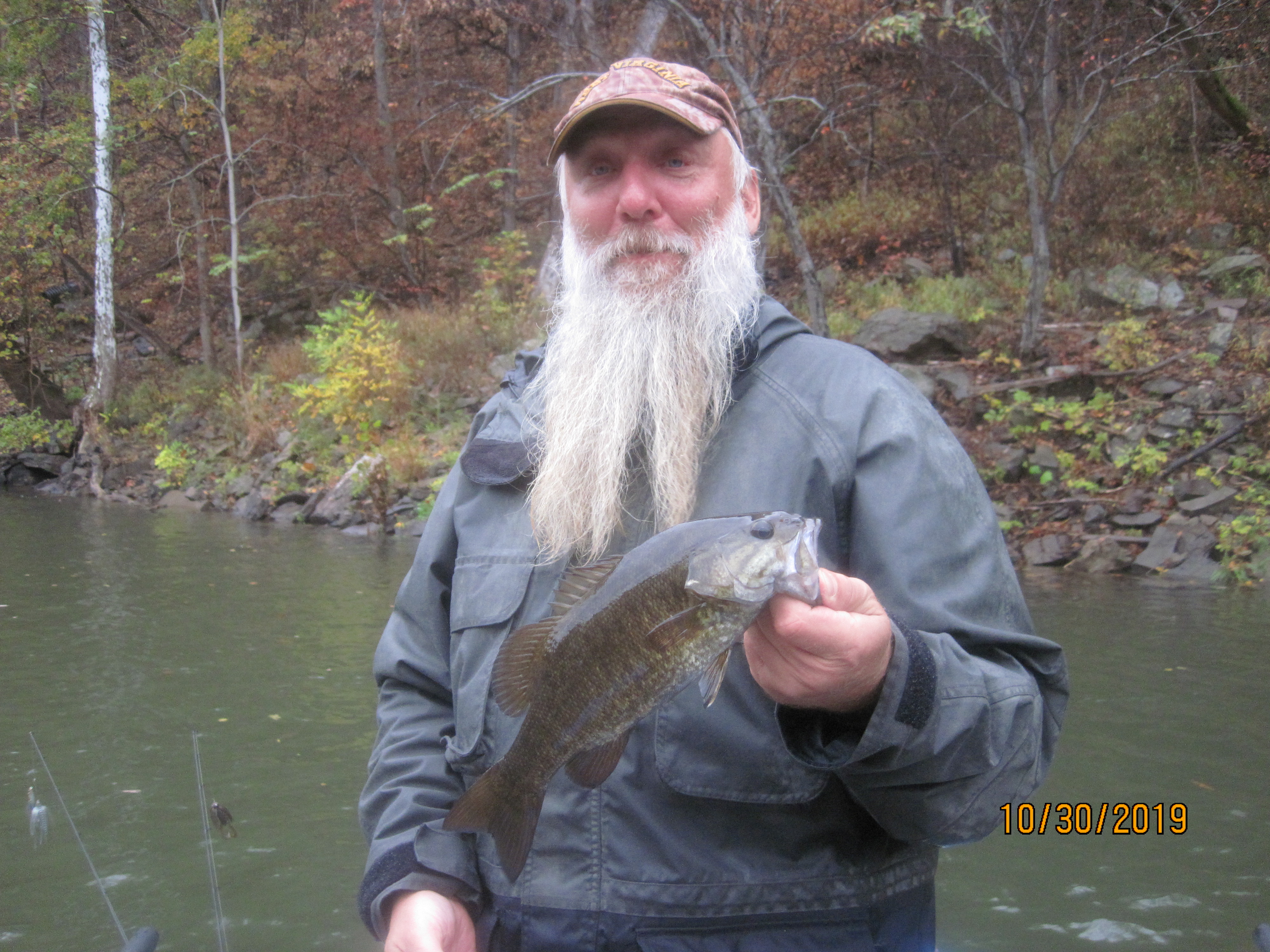 It was cool to see the clouds roll over the mountains all day. 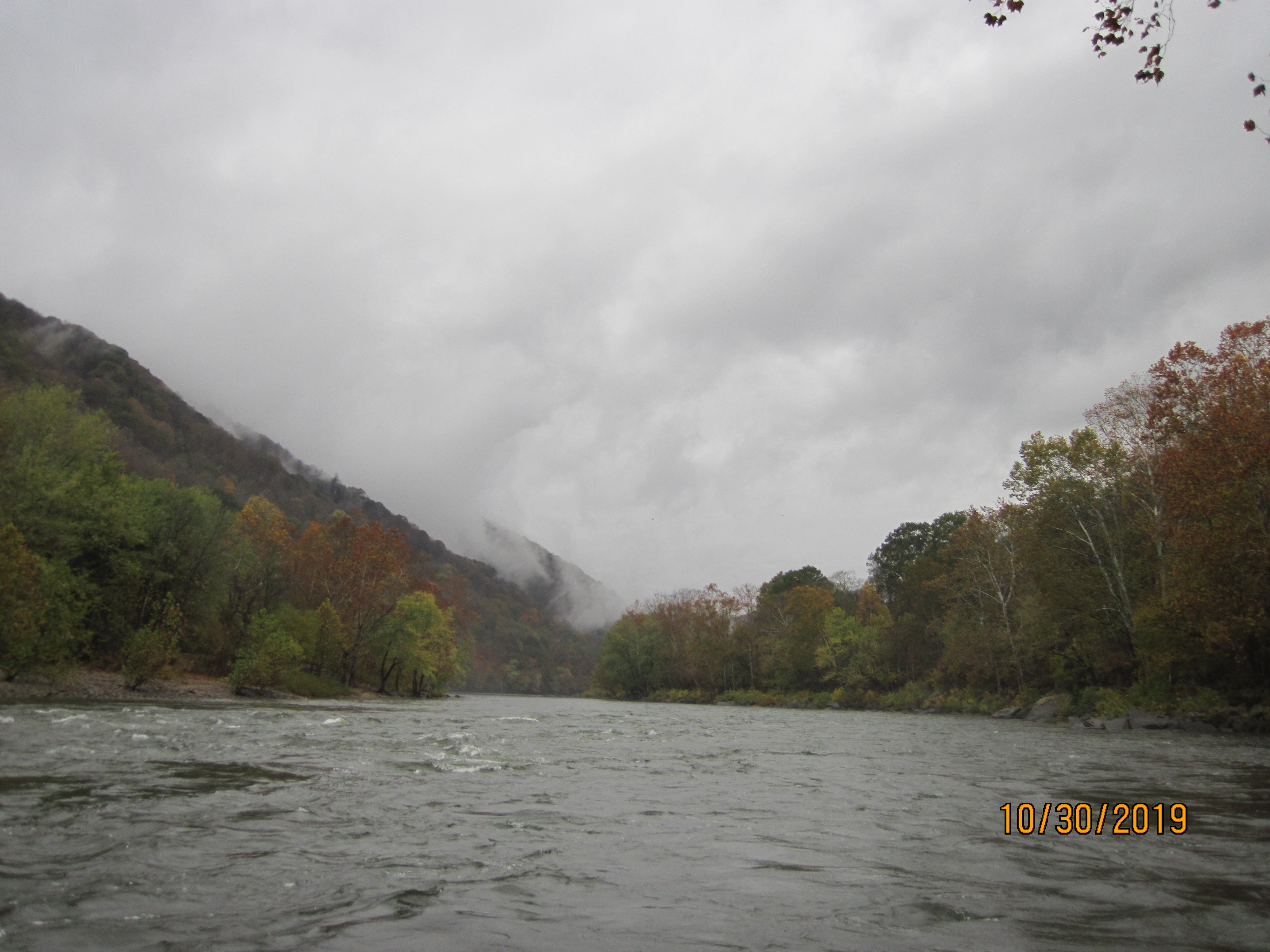 Here was the big fish of the day that came almost at the end of the float right behind a flooded patch of dried grass.  It was maybe 15" and super fat.  We ended up with Jeff catching 7 smallies and I caught 5. 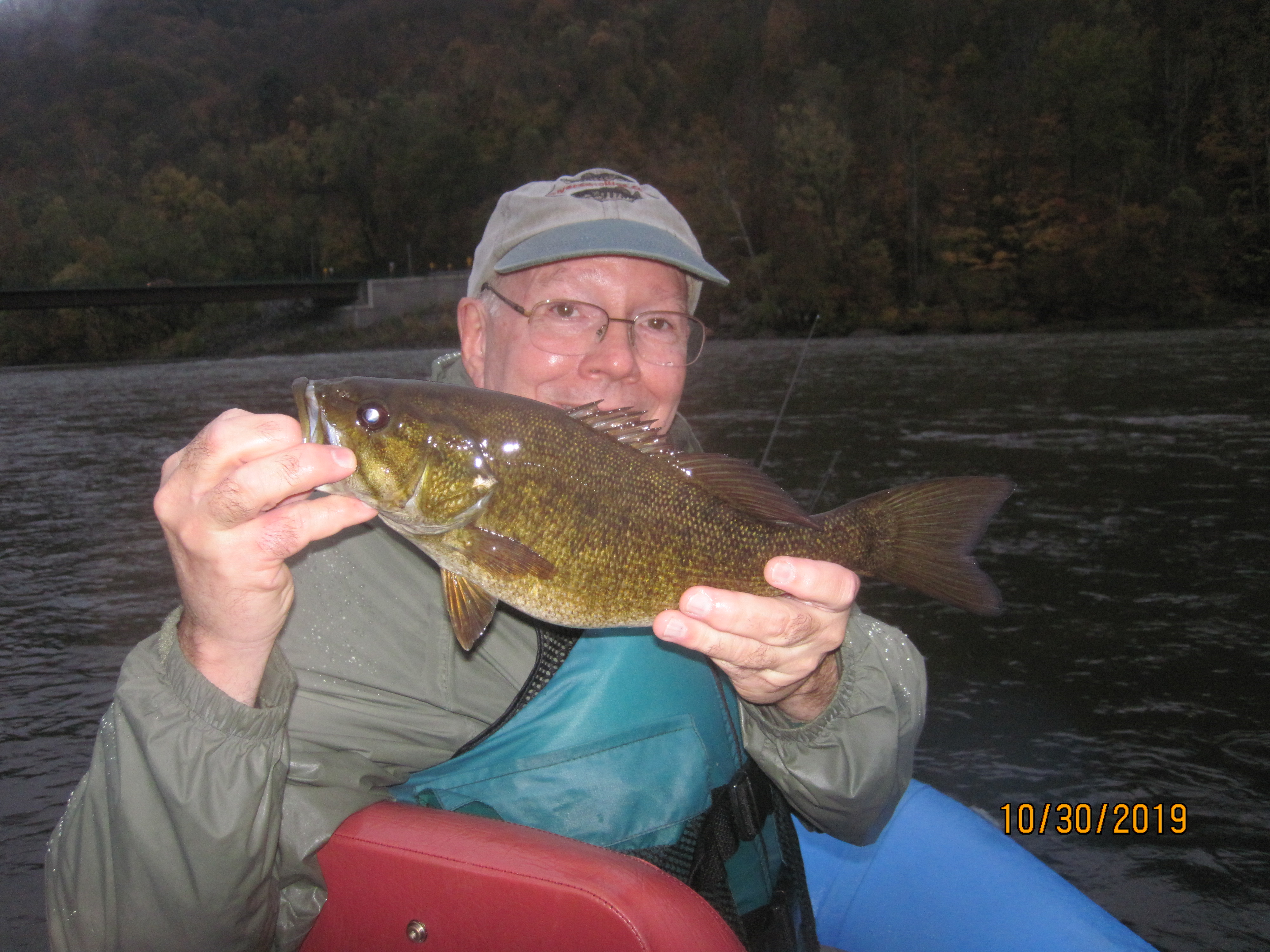 By the time we got to the cabin take out it was about dark.  It was a little tricky getting things broken down and loaded.  Jeff did most of the work as I was unloading my wet stuff and putting it in the cabin.  I did not get a picture of the outside of the cabin because it was dark, but here are a few of the interior.

It had 3 bedrooms plus a step down basement with a bed and a pull-out sofa, wood stove and the garage was set up as a bar!

Jeff brought ribs and made ribs, baked potatoes and beans for dinner.  It was awesome and I was stuffed.  Forgot to take a picture of the meal.  We talked for a little while and Jeff had a couple beers.  The weather did not look promising for Thursday.  Jeff was researching hard to see if we could possibly sneak a short float in.  He decided to get up early and check the conditions again in the morning.  If it looked good, he would wake me and we would go for it.  By the time I got all my stuff unpacked to dry and took a quick shower, it was 11pm.

Jeff knocked on my door at about 6:30am and said it looked good for a short float of we got on the water by 9:00am.  He had the coffee made (honestly, I felt like he did all the work!) and I scrambled to get my stuff together.  We were packed up and headed to the take out.  We get there and the railroad tracks that run right next to the river were tore up and the road was closed there.  We got out to look at the situation and a guy from the railroad got out of his truck and asked if we were trying to get to the ramp.  He told Jeff a drive-around and we were off.  The road was about a half mile  dirt road with potholes up to Volkswagen size filled with muddy water.  It was a rollercoaster ride, but we made it to the put in. 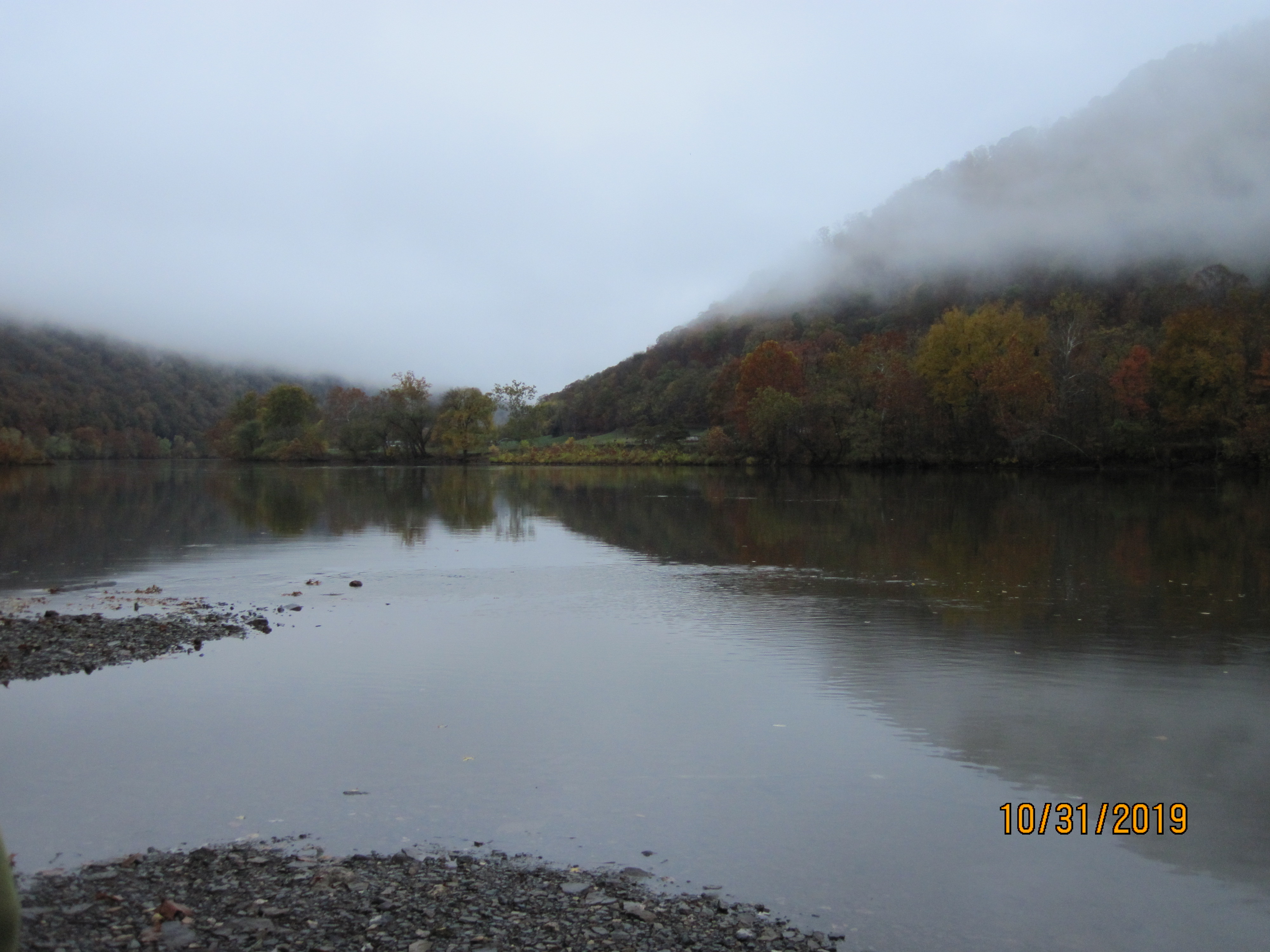 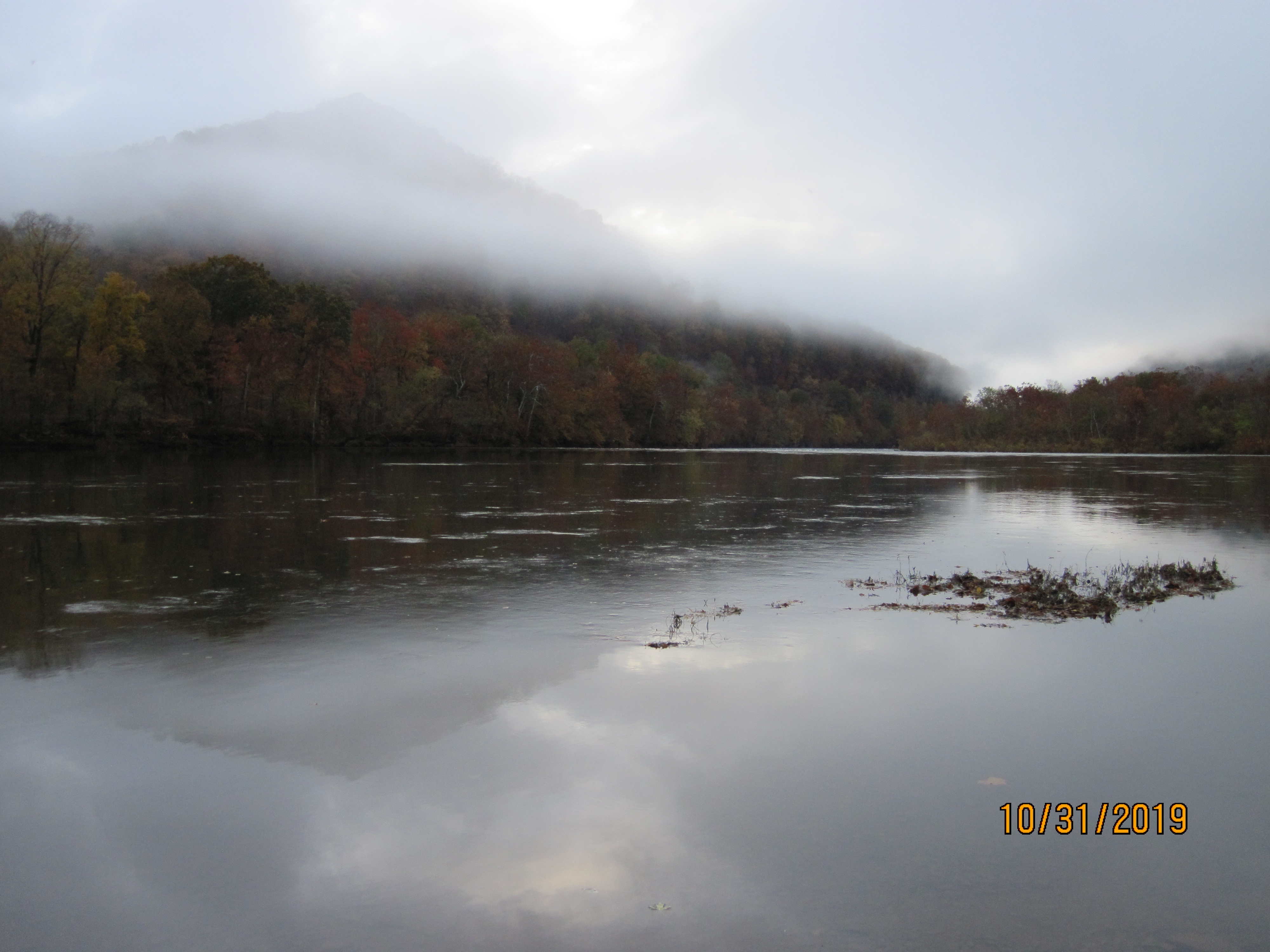 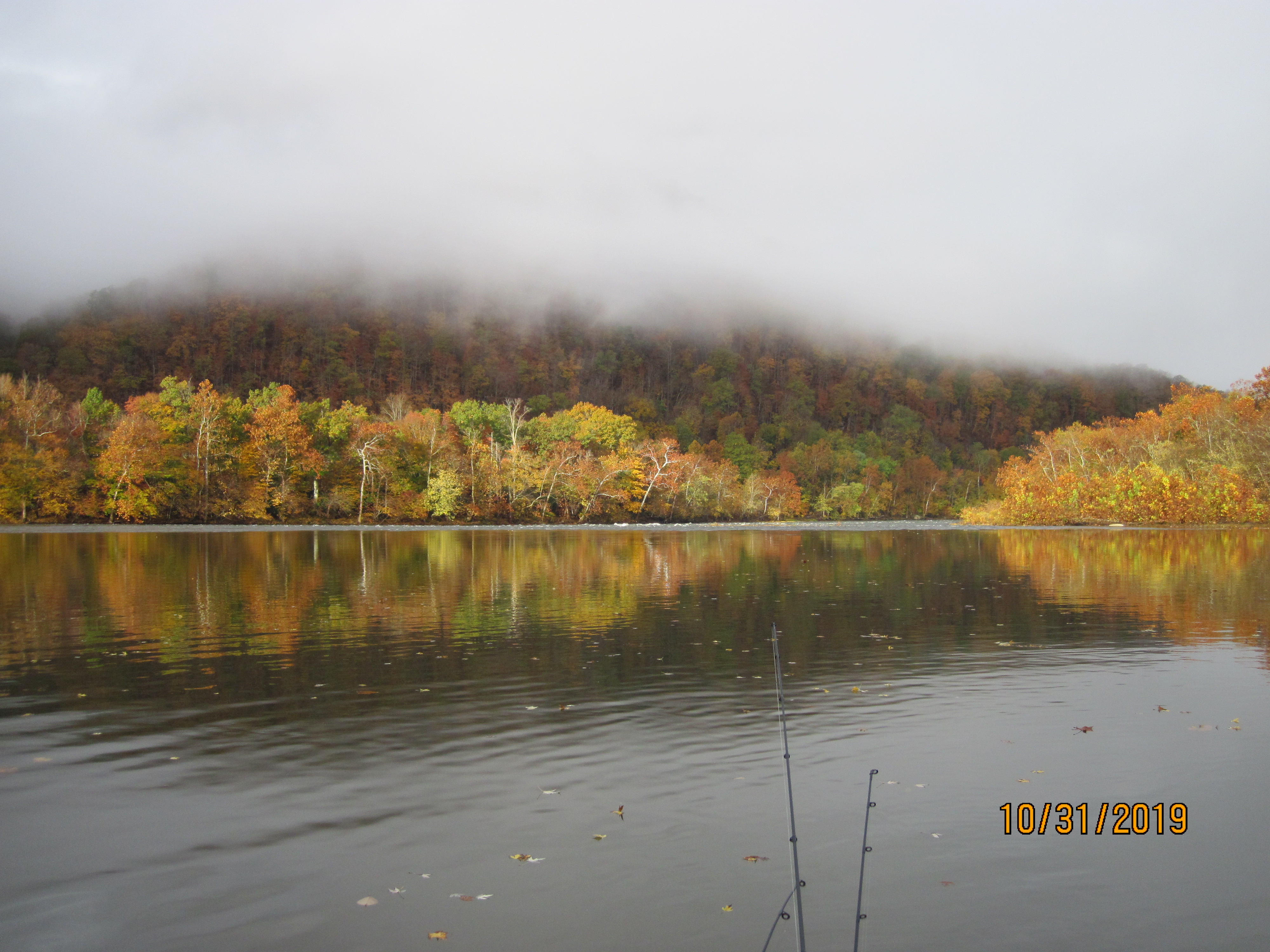 The weather was crazy with intermittent clouds and sun and temperature fluctuations that ended up getting hot and humid when the sun came out.  A few light showers, but very little rain made it a much more comfortable float overall.  Since it was a short float, Jeff pretty much gave me a Cadillac guide trip.  It was run and gun mostly, so no pictures.  I caught 2 small fish behind rocks before the first riffles with a swim bait and then it was back to sporadic action.  I caught one more in a shoreline slackwater with the swimbait.  Jeff caught one on a ned or a jig.  After that, I caught fish on a tube.  Two were in one spot and one little one hit me 6-7 times before I hooked it.  All fish were 12" or less, but the bite was more aggressive than the day before.  Once the sun came out we struggled for bites.  We made it to the takeout a little after 12pm.  Although the fishing was not on fire, the trip was awesome and the action was enough to keep you focused for the big bite at any moment.  I ended up with 7 smallies and Jeff caught the one and had a couple bites in between rowing my butt around.  We loaded our stuff up in my Highlander and Jeff ended up leaving the raft to pick up in his truck.  I was back on the road home before the storm hit a little after 1pm.

It was a great experience thanks to Jeff's hard work and planning.  I hope to get down there again sometime and recommend the area to anyone to wants to experience a great river.  Pretty much raft or experienced paddler area.  A guided trip would be a safe bet.

Is slow fishing the new norm in our area?

That cabin gets me thinking....is any part of that river jetable?

Those rafts are great but a major PIA to set up.

Jeff had a great system to inflate the raft quickly and like most of us had his system down.  He said we were probably a little early for a true Fall bite as water temps were in the 60's.  We just never found them stacked up.  Fished hard trying spinnerbaits, chatterbait, cranks, swimbaits, tubes, jigs and ned rig.  Switching baits was a pain with the rain the first day.  The opportunities for hogs are always there.  The river has sections that are jetable, but we went through a good number of class 2's and 3's with possibly one 4.  There is a whitewater section there as well.  I am sure there are sections to jet and Jeff mentioned a couple.  We saw maybe one set of paddlers on the river behind us the first day.  Had the river to ourselves pretty much.

Wow, what a beautiful place.

Last couple times I've been down there fishing has been slow.  Had to down size baits to get numbers.  Only one big fish on a buzz bait.  Did get a couple sallies on my line eaten by toothy critters.

Ernie - I've seen allot of jets in the VA portion of the New - not sure about the WV portion.  You really have to know the area down there before you run

Jeff got it through VRBO.  It was in Prince, WV.  Once we rented it, the link did not show that cabin.  I will see if I can find what it was called.  The only bad thing about the place was the mattresses were cheap foam.  We were so beat it did not matter much though.

Ours was less than half that amount though.  I tried different dates, but could not find it.

Thanks, looks like a great change of pace from the jersey shore for a vacation.

Here is the link to the cabin we stayed in.