After a long stretch of corporate tax compliance and Q3 planning, I was ready to for Starrett's Pointe weekend. I packed 5 casting rods, and 2 spinning rods and a load of tackle...just to be sure I had all my basis covered. I ended up only using 2 of the rods the whole time of course. Left at 1:30PM and hit a ton of 95S traffic from Stafford to Fredericksburg, which added about 45 minutes to drive, maybe I'll take 301 next time. Got there at 5PM and the other Tom was already there. We proceeded to harass perch, drink a couple beers and smoke a cigar. Biggest perch was about 9", with most being about 6". The other guys also got into a bunch of perch and several rat reds too. 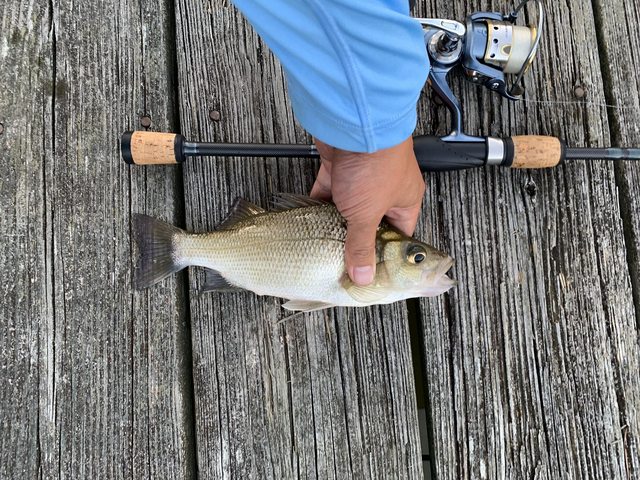 Then the festivities for the night began when the sun set and everyone else was there. All was normal bantering with beer and sazeracs, but then someone decided to break out blackberry moonshine. We all took sips passing around the bottle...and by the time it went around 4 times, it was gone. Then some genius decided to get a spoon and we started eating the berries. I had one and spit it out...it tasted like 2000 proof gummies. Winner of that eating contest was Dave...he had a big spoonful, maybe 8 in one bite. That did not go well later for him, after a wild river pygmy hit him with a dart and there was some projectile regurgitation that followed. That was the curtain call and we headed to our bunks for a later than normal wake up call.

Day 1: We launched at about 10AM, with a low tide around 11:30AM, blue bird skies and low humidity, we knew it would be a tough day. We first hit a flats bank with spinnerbaits looking for some slot reds. John was the first to hook up and landed a 3lb blue cat. A few casts later and I get whacked, it pulled hard so maybe another catfish...then it jumped and shook the spinnerbait. It was a nice LMB, at least 4lbers, maybe more...big belly on her. After that, just a few more taps but nothing else. Then we moved up into the swamp. I had some confidence in the spinnerbait so I downsized to a finesse war eagle and chartreuse grub tail. We proceeded to catch several small LMB, but nothing of size. Really crowded up the swamp that day, saw about 6 other boats. Our last move was down into one of the offshoot creeks. Saw lots of flash in the water....huge schools of bunker in about 1-2' of water. We switched to a curly tail worm and got a few more dink bass, but I couldn't take it anymore and switched back to the finesse spinner. John and Mike were picking off some bass here and there, and I casted on the opposite side and I get slammed, absolutely whacked. I'm thinking huge bowfin, and the thing pulled for a second then became dead weight. I almost fell out of the back of the boat from pulling against it. Then when it got closer...I saw the outline of a huge shell, and a huge thick tail. It was a huge snapping turtle, at least 25lbs, shell was close to 2ft across. After the huge let down, I bring it next to the boat, and Mike has his pliers and goes down to try and dislodge the spinnerbait. The turtle lets out a ferocious growl then its articulating neck snaps at Mike, and then shook off by itself HA!!!! That was the highlight of Day 1. Then we head back in for frogmore stew, which is always outstanding. While dinner was cooking, I go down to the dock to harass some more perch and go for some rat reds. I almost catch a slot red! 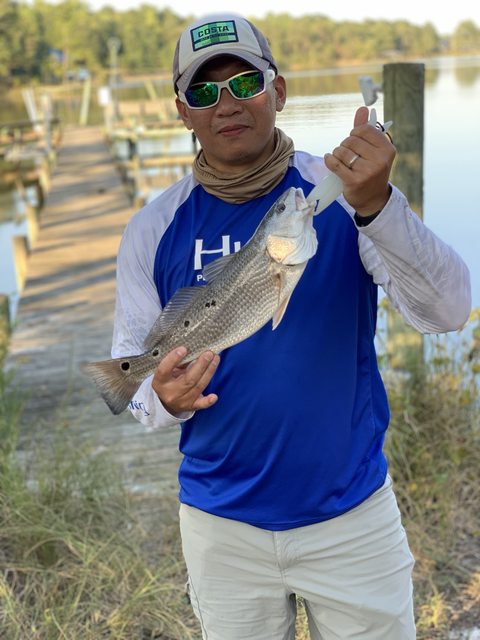 Day 2: It got warmer, and more humid and Mike proclaims that it would be better fishing, and he was right. Our first spot is a wind blown cove and we see lots of bait being pushed up the bank. Spinnerbaits again, and I'm on the second cast. Not a huge LMB, but largest landed for me that trip. 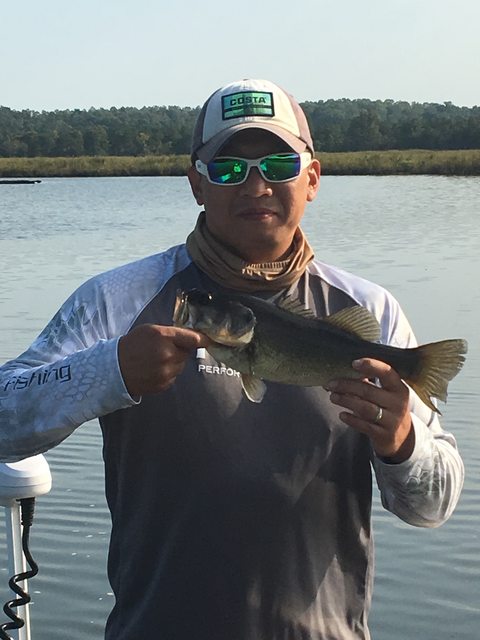 Instead of casting up to the bank, we started casting out into the cove flat and barely ticking the grass. Got slammed and I landed my first bowfin, and then about a dozen more. 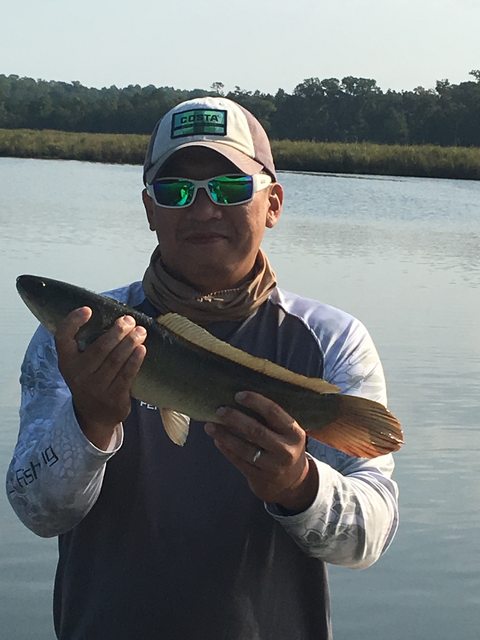 After fishing out the cove, we move to the same flats bank as day 1, but nothing. Then we immediately head into the swamp. John picked up a small pickerel, and we boat several small bass again. I had a good bowfin on in about 5" of water, but shook off at the boat, I'd guess about 5lbs. We just couldn't locate the big bass. We made out last move out to the flooded marsh area. I was casting a spinnerbait in there, and there and it wasn't really running that great because there wasn't much water. Of course right as I'm about to give up on the retrieve a snakehead was following it in the whole way and made a big dash when it saw the boat. Mike push poles us in a little further and we're seeing bowfin literally 2 feet away from the boat. They wouldn't even bite a worm dropped on their head. We saw a huge snakehead go over some grass way back there, but couldn't get to it. It was big, at least a 10lber based on the size of the back and tail I saw. Got a couple more dink bass in the marsh, and then we headed back in.

I stayed for another hour at the dock to wait out traffic, and picked up couple more rat reds, perch and some baby stripers. Going to miss that view until next year. 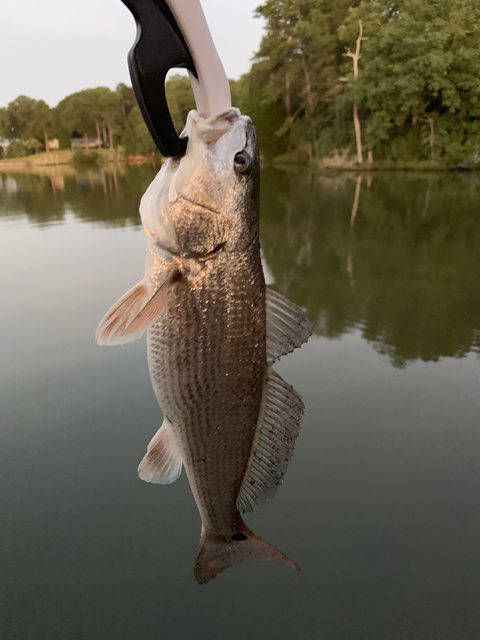 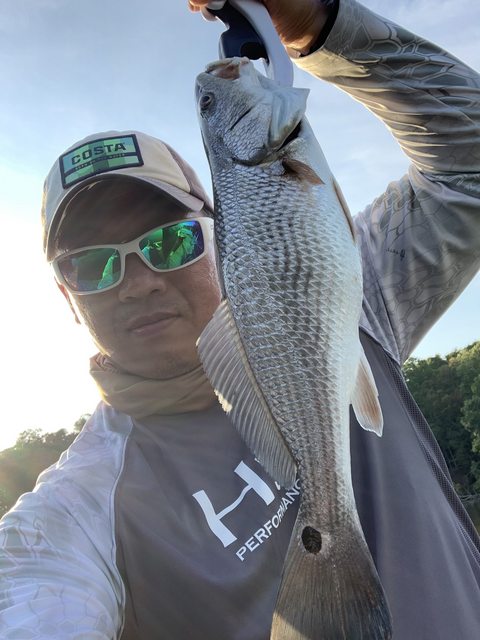 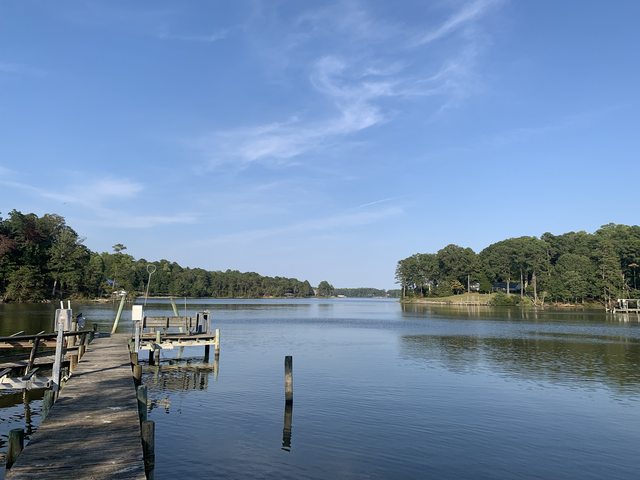 Great report and nice pics too! I'm thinking about hitting that same river this weekend, though I'd be a good bit further downstream.

Eating 2000 proof gummies will get you every time