I really should know better, I drive over Goose Creek once or twice a week.  But I cooked up an idea with a friend to do a shuttle float on Goose Creek.  In September, after a dry summer.

What am I thinking?  I'm not!  That's the problem!  Even stupider, we dragged a boat (inflatable, but still) down the W&OD trail to start.  I had been down the trail to Goose Creek like ten years ago, but forgot how far it was and how steep it was.  Also I got ten years older.

After maybe .75 miles worth of strange looks and many rest stops on the trail, followed by an awkward lowering of the canoe/raft down a 5 foot high bank to the water, we launched on to this: 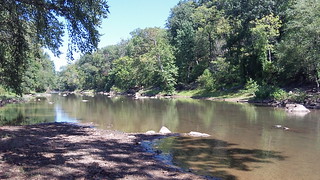 What followed was a lot of 50 yards of float, 20 yards of wade and drag.  I picked up a yellowbreast sunfish on a rubber hellgrammite but that was it.  We took an extended stop portaging the old canal locks near the golf course and had a good conversation with the guy who owns the house there.  He's a nice guy, say hello when you do the float in the SPRING when there is water.  Fortunately there was floatble water from this point on to Keep Loudoun Beautiful Park.  Moving up to a 2" tube with nail head jig, this game 10" SMB gave a good accounting: 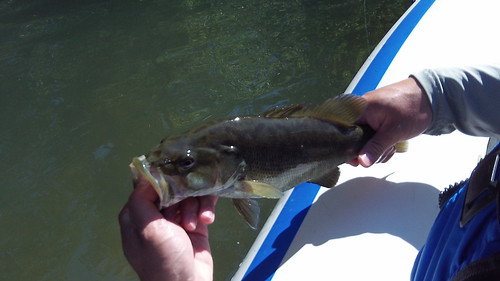 More dragging came into play around the Rt. 7 bridge.  We finally had good water again and I got this 11.5" SMB to the boat: 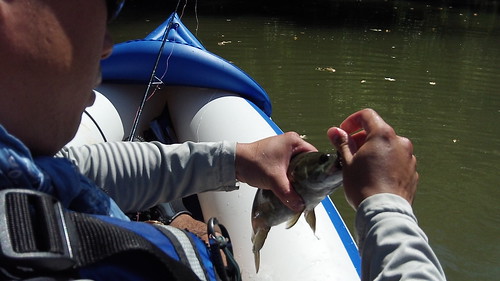 Picked up a little dink SMB after that. And then more float-dragging.  We we're shooting for Kephart Landing, but ran out of water with a quarter mile or so to go, so we pulled the boat up and hiked down the trail to the car and that's the day.

Both of the bigger smallmouth had similar sized friends who swam up for a look while I was reeling the fish in, which I take to be a good sign for the population in Goose Creek.  Also talked to a wading bug chucker who said he did well wading down towards the Potomac.  I think that's going to be my approach on Goose Creek until spring, wading.

I like these kind of reports. Been there and done that.Better than not trying at all.

Some folks didn't catch any fish on Labor Day.

Thats great.  Thats kind of funny as I launched from Loudoun Beautiful Park on that saturday.  I went down steam to the other launch and then back up.  I ended up catching a few but the creek is super low like you were saying.  All in all I had a good time.

Done that streach in the past - probably more than 10 years ago.

But I did it in the Spring when we had some water.