It was a nice day and my busy season finally cooled down. I needed to get out and so did my dad, so after breakfast I called him and to go out to Little Seneca Lake. I haven't fished here all year because it's deep, and my trolling motor fish finder cable had been sliced by accident. So over the winter, I got some things to patch it up and I finally got around to doing it. So the trip to Seneca was also going to be the test to see if the patching worked.

We get there at 1:30PM and it's pretty crowded with trailers. The morning was nice, almost no wind, and then of course as soon as I put the boat in, darker clouds and winds start to roll in. It's electric only here and the wind is against us leaving the boat dock, and the little 40lb thrust TM is having trouble going faster than 2mph. TM graph looks great, and I even see some marks around 10-15 feet. B 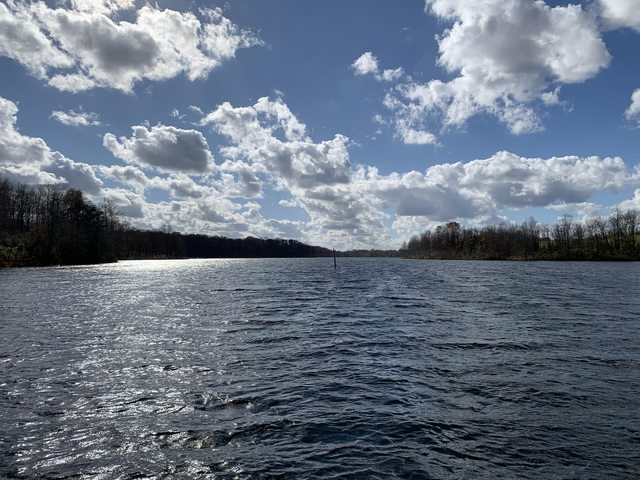 First we head to the left arm of the reservoir towards the houses, my dad recalls catching some crappie back there. So I oblige, and as we motor along the bank I'm just throwing a small inline spinner to see if I can catch a bass, crappie or yellow perch. Nothing. Then as we get to the spot he wants to go, it's just filled with hydrilla. There have been reports of snakehead caught in here and now I know where to go for them next spring.

Next we go to the bridge, which is just Route 21 going over the reservoir. Going at 2-3mph though, it takes about 30 mins to get there. We hit a coupe pilings, and my FF is lighting up, they're all 15-25 feet. I put a blade bait on and start jigging. I immediately catch some crappie, really small and thin, zero fight and cold. 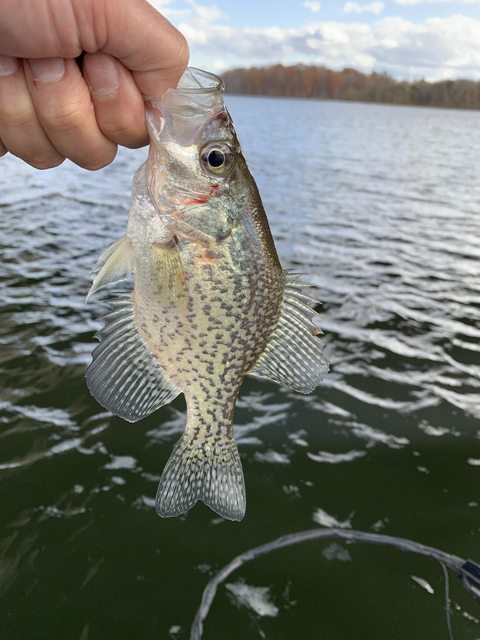 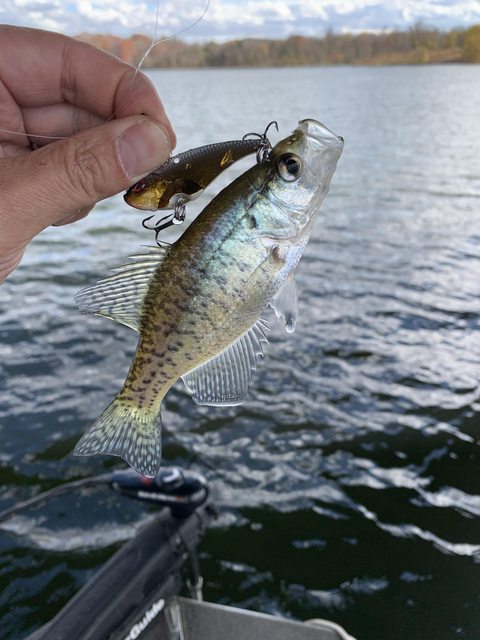 We keep moving around the pilings and I spot some more closer to the bank, and I cast there and get the largest one at about 8". My dad wanted to keep it thinking he could get 4-5 more for a fry, so I toss it in the well. That must have cursed us because we didn't catch anymore after that. I see some calm water behind a cove near the bridge and I head there to see if I can catch a bass with a jerkbait. Water looked great, 57 degrees, calm, 6-10 feet, some bait marks but nothing. I ask my dad if he still wants the crappie and he shakes his head so I throw it back.

Then comes the long 45 minute ride back to the ramp. That's probably my biggest peeve fishing here is that it is so big and electric only. There are some huge bass in here but it's almost not worth my time between fighting boats, recreational kayakers, and the sheer amount of timing trolling to a spot.

You got out and caught something.  Success.

Sorry it wasn't a fire trip, but as drxfish said you got out and caught something. Also, the patching seems to have worked and you got to spend quality time with your dad. Winning.