[Warning: Long Post!]My wife and I were originally planning to go to Napa Valley without our kids for a long weekend. But we decided a couple weeks beforehand to cancel it because the fires in the south were causing bad air quality, and it seemed like the vineyards actually were shutting down the outdoor events. We are lucky we cancelled, because just before we were supposed to be there, the Glass Fire broke out, and it totally destroyed one of the vineyards we were planning to go to. https://castellodiamorosa.com/friends-family-page/

So instead, we went to Key West. The weather was really spotty, the first day (Wednesday) it rained 80% of the time, but managed to do some exploring around town and some shopping. I stopped in for lunch at Schooner Wharf, and of course I'm gazing into the water to see what's going on, and I see dozens of 5-6ft tarpon roaming around. One of the charters was cleaning fish and dumping guts and parts and they are basically pets trained to wait for the charter boats.

That got my juices going and I immediately check my phone for weather tomorrow to see if I could get in a half day charter to do some back country fishing. I just used google and I call a captain up, and he says weather is 50/50 so he would text me by 7AM if we could make it out. Well the next morning on Thursday, 7:10AM, he says it doesn't look good. It was dark, windy, and there was something definitely coming from the horizon. But....by 9AM, we got nothing. 10AM, and the wind dies down and it's even nicer, partly cloudy skies, and 5-10mph. I was so disappointed, I wanted to fish so badly. I text him back to see if he could go out in the afternoon, but didn't get a text back. At this point I'm deflated, but I found a kick ass Cuban coffee place, that made amazing food. I ate there every morning for breakfast, and sometimes stopped by for late afternoon snack. https://www.keywestcubancoffeeshop.com

I check the weather again for Friday, and it looks worse, 80% showers in the morning, BUT it dropped down to 30% around 2PM. I google again for a different charter and go in touch with Dream Catchers Charters (www.dreamcatchercharters.com) and I book a 5 hour trip at 1PM on Friday.

Friday comes around, and the rain woke me up at 7AM, I got drenched making me way to and from Key West Cuban Coffee, but it was so worth it. Basically my whole morning was looking at my weather app radar and looking at the horizon, I'm sure my wife was probably trying to talk to me and I was probably just nodding my head, waiting for 12:30PM to come around, haha. So finally, the time comes and I Uber over to the marina and meet up with my guide, Bryson. He's a young guy, just recently graduated from University of Florida, and he's living up his life in KW and guiding, what a life!

The boat is beautiful, a 24' Yellowfin Bayboat with a 300 Merc and twin talons. That would be my dream boat if I could fit it in my garage. We get out of the marina and get on plane and we're cruising to our first spot, the back of a large mangrove island. Bryson says the morning bite was tough, so we're trying a different area than the morning. We're throwing MirroLures on light tackle, mainly for barracudas. First few casts, I'm getting hit, but nothing hooks up. I was about to slow it down, but Bryson says, "go faster!" and I do. Then I start to catch some small cudas. I finally hook something decent that pulled drag, and got this guy: 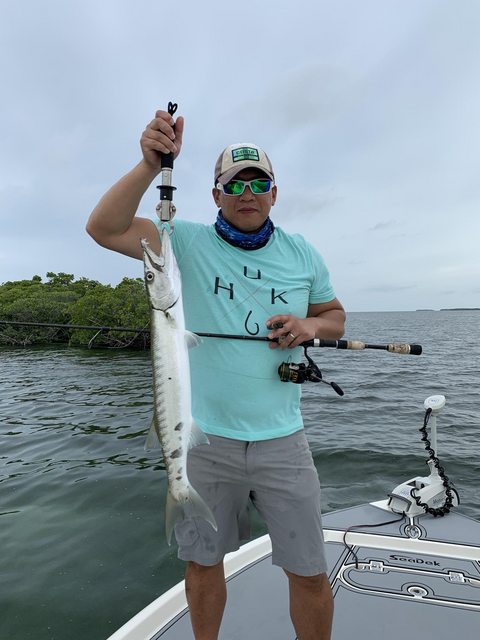 We kept that one, but I wasn't sure why. Then we keep getting lots of small cudas and then as we're rounding the mangrove island toward the windy side, I throw just past the island point and something hits, and feels different. It's head shaking a lot compared to the cudas, and I land this guy: 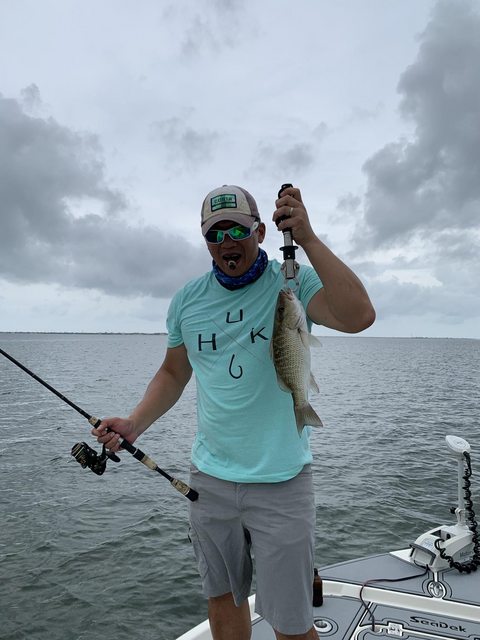 After a couple hours of hooking and releasing cudas, Bryson asks if we wanna go for something bigger, like tarpon or shark. Heck yes! So we motor a couple miles to another spot, this one with a big inlet into a larger mangrove island. Before we get in there, he gets the rod ready, and live lines a small pinfish. We are basically going stealthy into the mangrove cut and spot casting the live line for tarpon. I see this little low hanging branch and skip the fish in there. Literally 2 seconds after, and tarpon takes it, but shoots out of the water TOWARDS us. I try and set the hook but since he's coming at us, I just pull it out of his mouth. My adrenaline is pumping and Bryson couldn't believe that it came out at us instead of going back for the cover. We keep going around the inlet area and see a lemon shark, but Bryson doesn't want to fight it in there because we'd just end up breaking off the line. We keep trying for another tarpon for about 45 mins but got nothing so we move on.

Now we're going for a shark, and I realize that the cuda we kept was for cut bait. Bryson is chopping it up in the live well, and using the blood in the water to circulate out the blood. We anchor up in a 30 yard channel between two mangrove islands. The wind has picked up a little and I'm finishing my last cigar. While waiting I pick up a rod with the Mirrolure, and chuck it between the islands, and as soon as it the lure hits the water something pops it like a top water lure. I reel to set the trebles and this thing feels it and immediately takes off and peels drag. It goes for the left island and I'm trying to angle it back to the right. The light tackle though has no chance and it goes into the mangroves, and I give it one last tug and I see something slapping against the water and trees from about 50 yards away. Bryson pulls in the cut bait and anchors and he's telling me all the things to do while we troll in to get an angle to get it out. Just as we're about 10 yards away, the line snaps on a mangrove root. Bryson was really disappointed because he really wanted to see what it was, he thinks it was a snook based on how it took the lure on the drop. Well after that fun, we go back to shark fishing and we see a good size nurse shark along the edge of one of the mangroves. We chuck the cut bait and it's just nosing it and circling it for about 5 minutes and swims off.

Out of time, and some more weather coming in, but what a great afternoon. The mangrove fishing is a lot like pad fishing to me, where it's a combination of sight fishing, picking spots, and then having to fight heavy cover. Can't wait to get back to both the fishing, and my favorite Cuban coffee place!

You were in heaven even though the weather was not the best.

Way to take advantage of a weather window and catch some up! That's a fine boat that lad has...

Going to those Cuban places for breakfast, lunch or dinner (or all 3) is nirvana for me.

Nice report!  Good to see you got into some fish.  Florida always gives up some heartaches with big fish that get away.

I wasn't a big fan of eating 'cuda until a friend filleted one, left the skin on, added some rub, then put it on the smoker.