I scheduled an outing with my grandson, Emerson who is 13 and 5 foot 10 inches now.  I gave him 2 choices 1) Beaverdam on the canoe (closer, but more work) or 2) Fountainhead (further drive, but less work).  He picked Fountainhead.  Then I said I like to go early, but what time would be ok to pick him up and he said 10 am.  I said "you are funny" and then he said 11 am?  I went with 11 am as I saw it was not going to be too hot.

We got on to the ramp and were fortunate to have the very first trailer space open up for us.  We ran downstream and hit one main lake spot briefly before settling in a cove I like.  The water was stained, but not muddy and the clouds and breeze kept the temps nice most of the day.  I brought along 4 UL-to light rods to fish for panfish, hoping we would at least catch something if the bass did not bite.

I was using my lightest setup with a crappie jig and 4 pound test and Emerson was using a 4" lizard on another setup.  After maybe 20 minutes, something took my jig and it was big.  It was pulling drag and had it's way with me for a minute.  I was keeping as much pressure as I could and trying to keep it out of a tree branch.  It was going around the back of the boat and then surging under the boat before I could even see what it was.  We finally saw it and it was a big catfish.  After a couple misses, Emerson finally got it in the net. 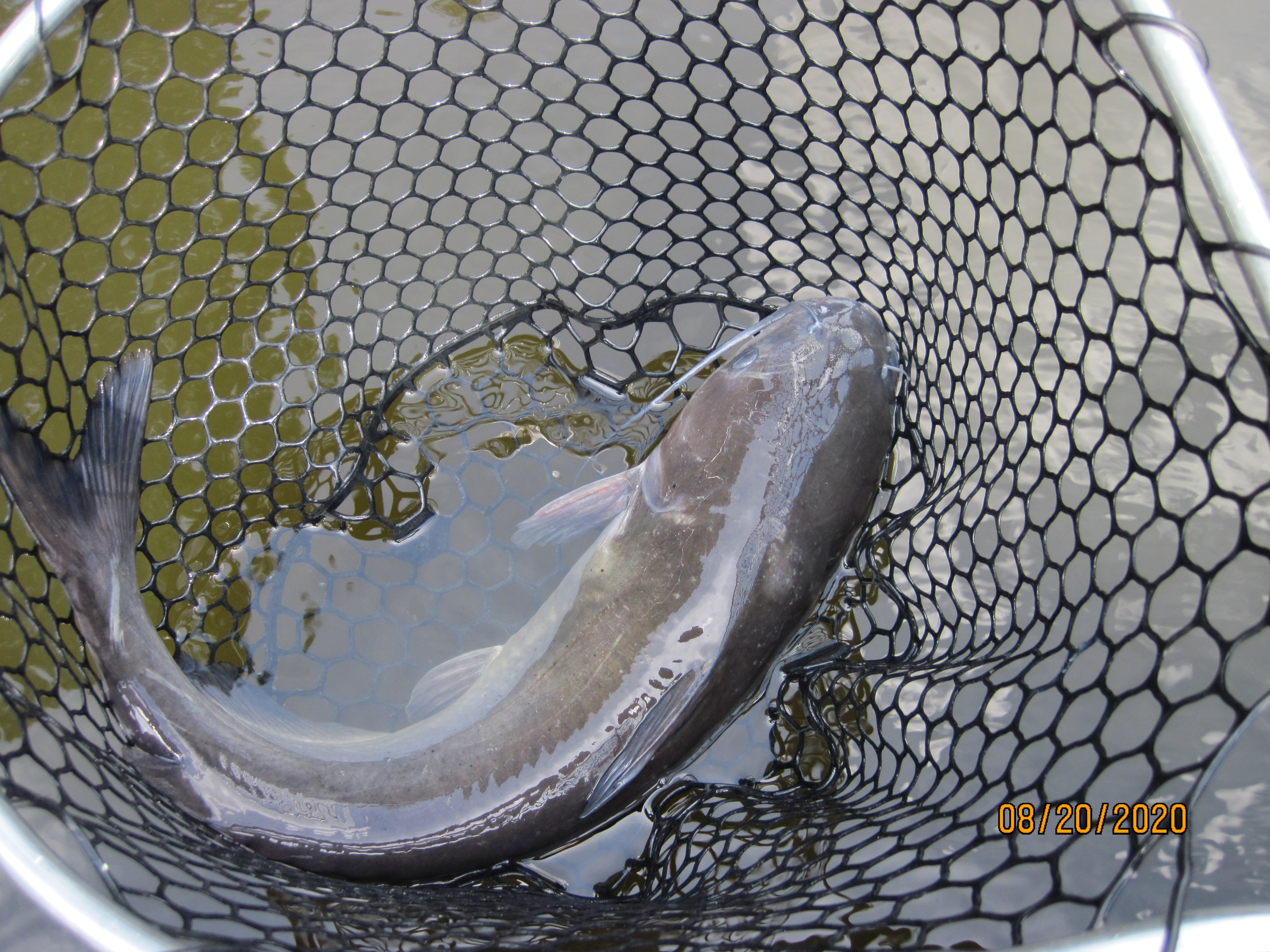 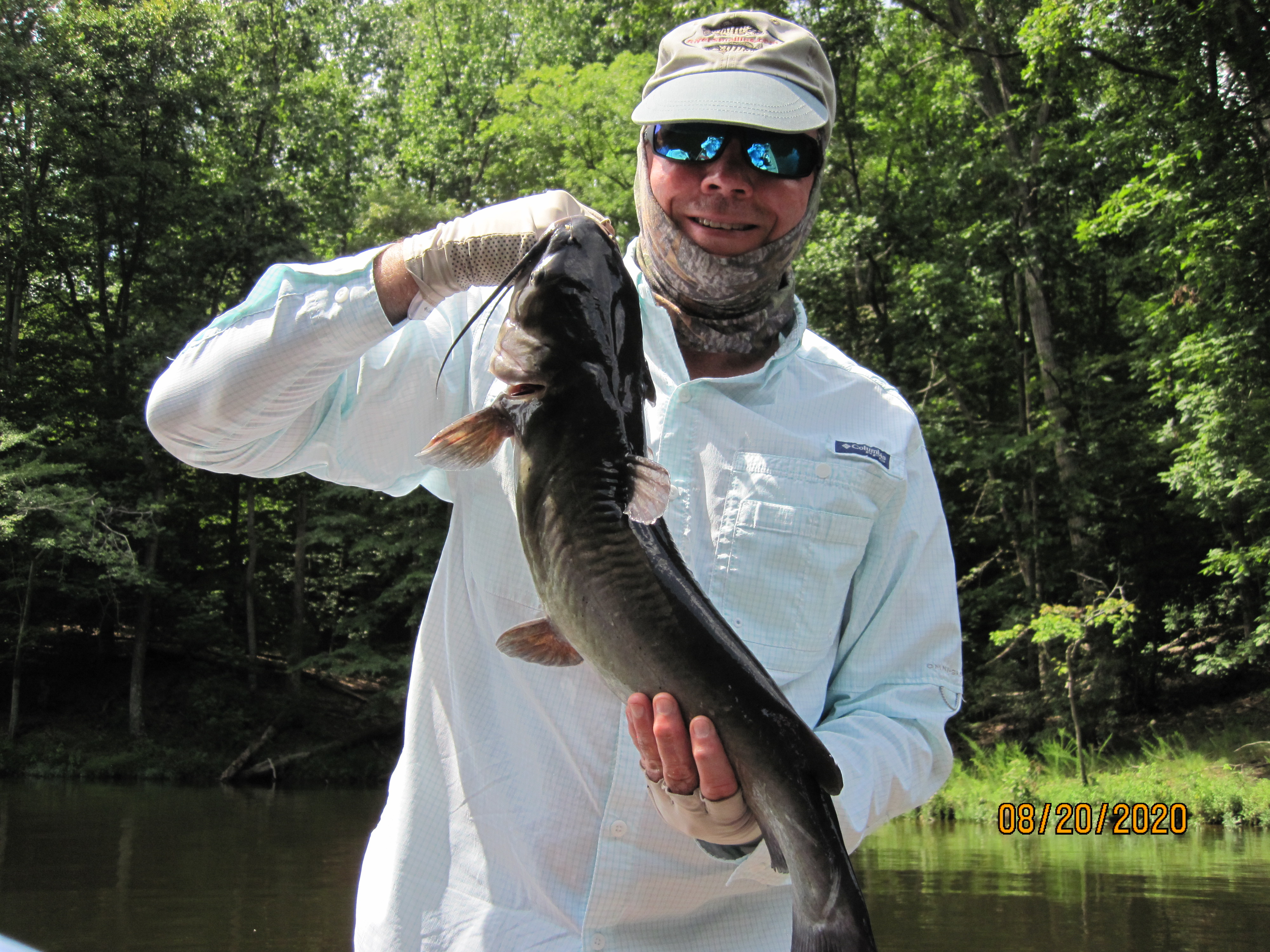 That was a good start to our day.  We did not get any more bites there, so we moved down near the dam.  It took a bit and we ate our lunch down there before catching much.  I think I caught a small bluegill on the crappie jig and then I put a trout magnet on his rod.  He finally got on the board with a bluegill. 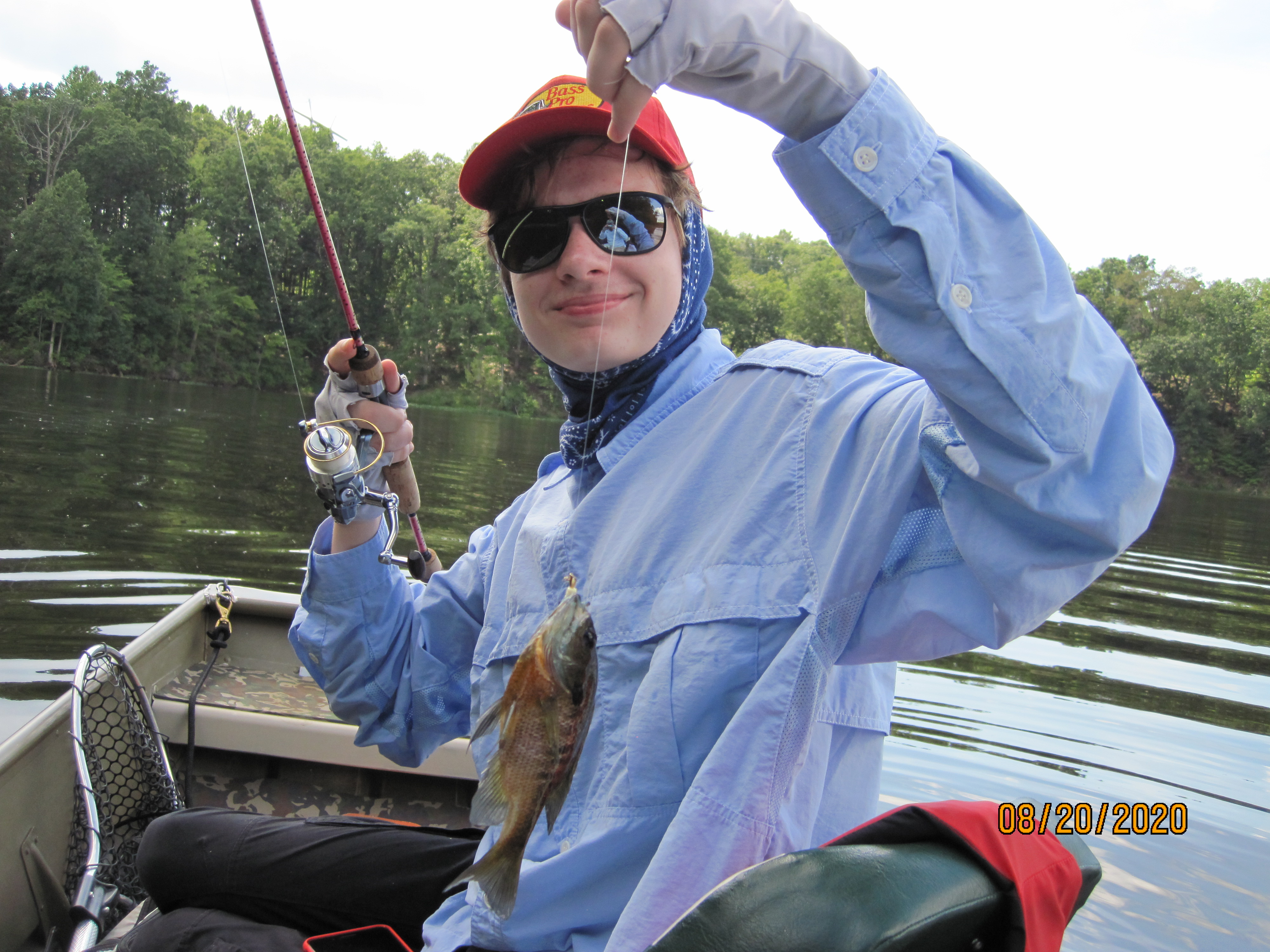 That setup would work well, but it was not easy to cast accurately.  The fish were right up in the weeds on the shoreline, which made it tough.  I threw out a ned rig while he was working the shoreline.  I just left it and dragged it as the wind moved us.  I felt a distinct "thunk" and knew it was a bass.  After a short, but strong fight Emerson netted it.  It was 14 inches, but healthy. 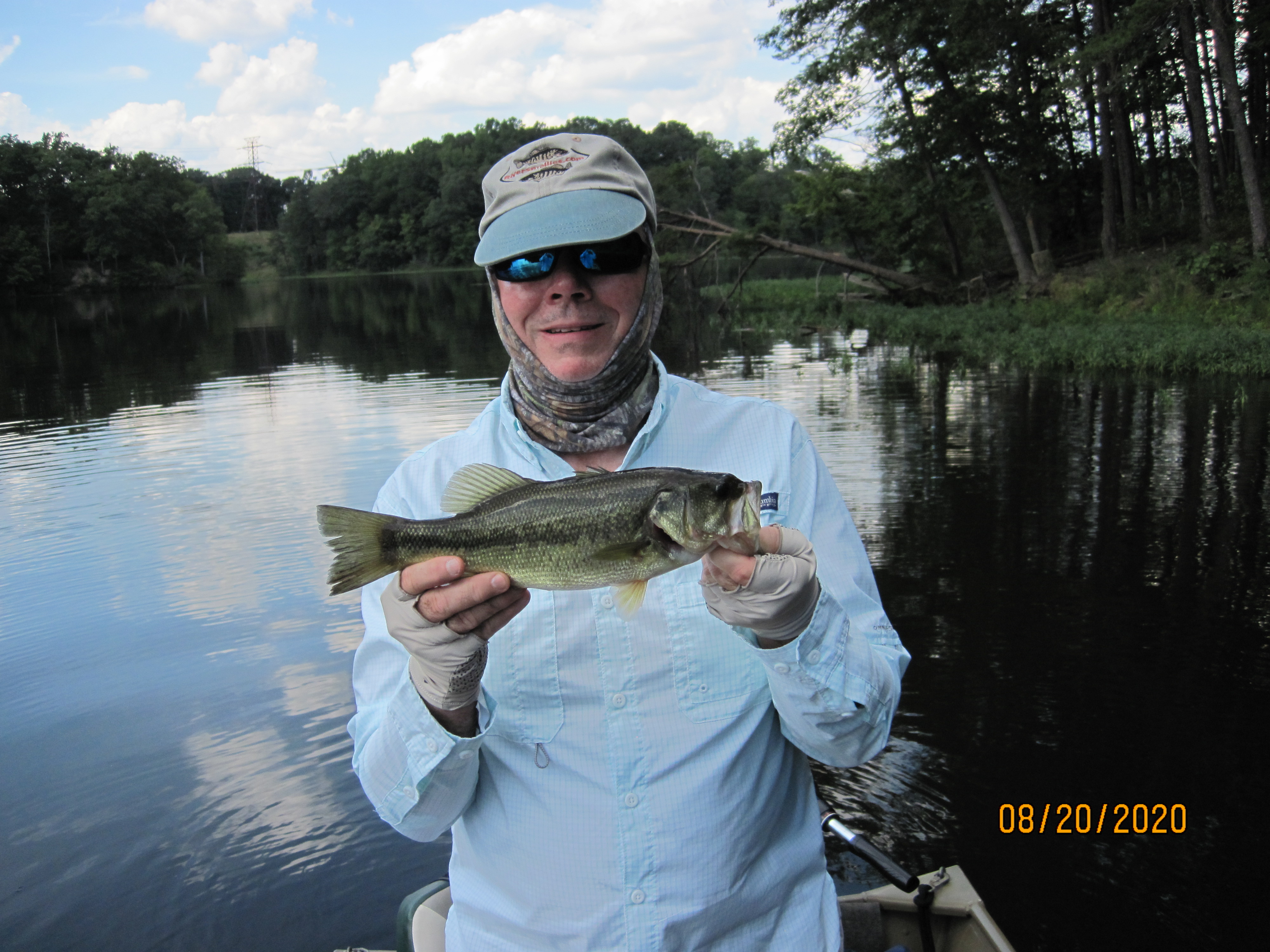 We both caught a few more bluegills and green sunfish.  Emerson ended up with 4 bluegill and I maybe had 6.  Here is one more he caught. 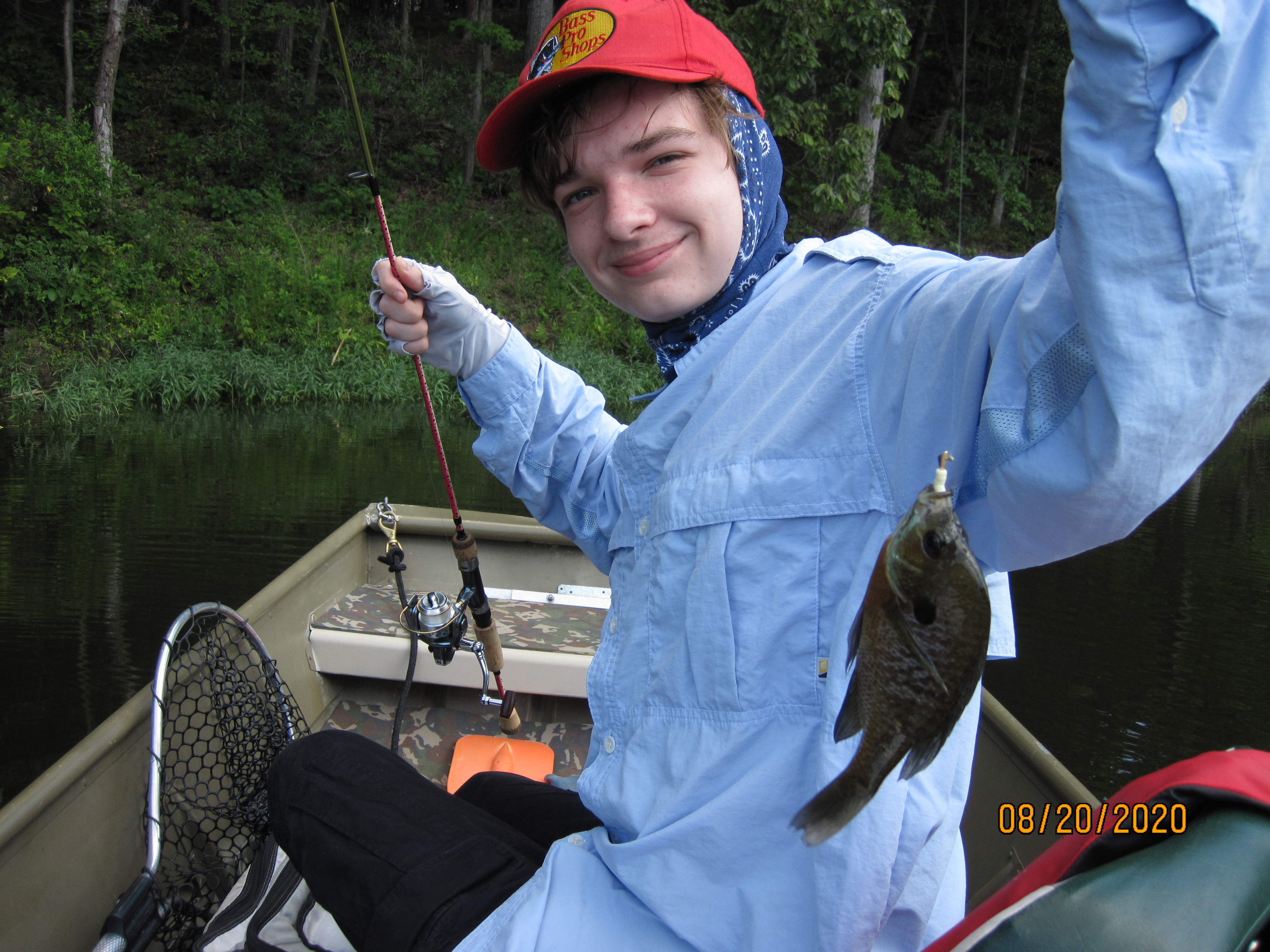 We fished until after 5:30pm and started making our way back to the ramp with a couple stops to try for bass, but nada.  I let him drive the boat most of the way back. 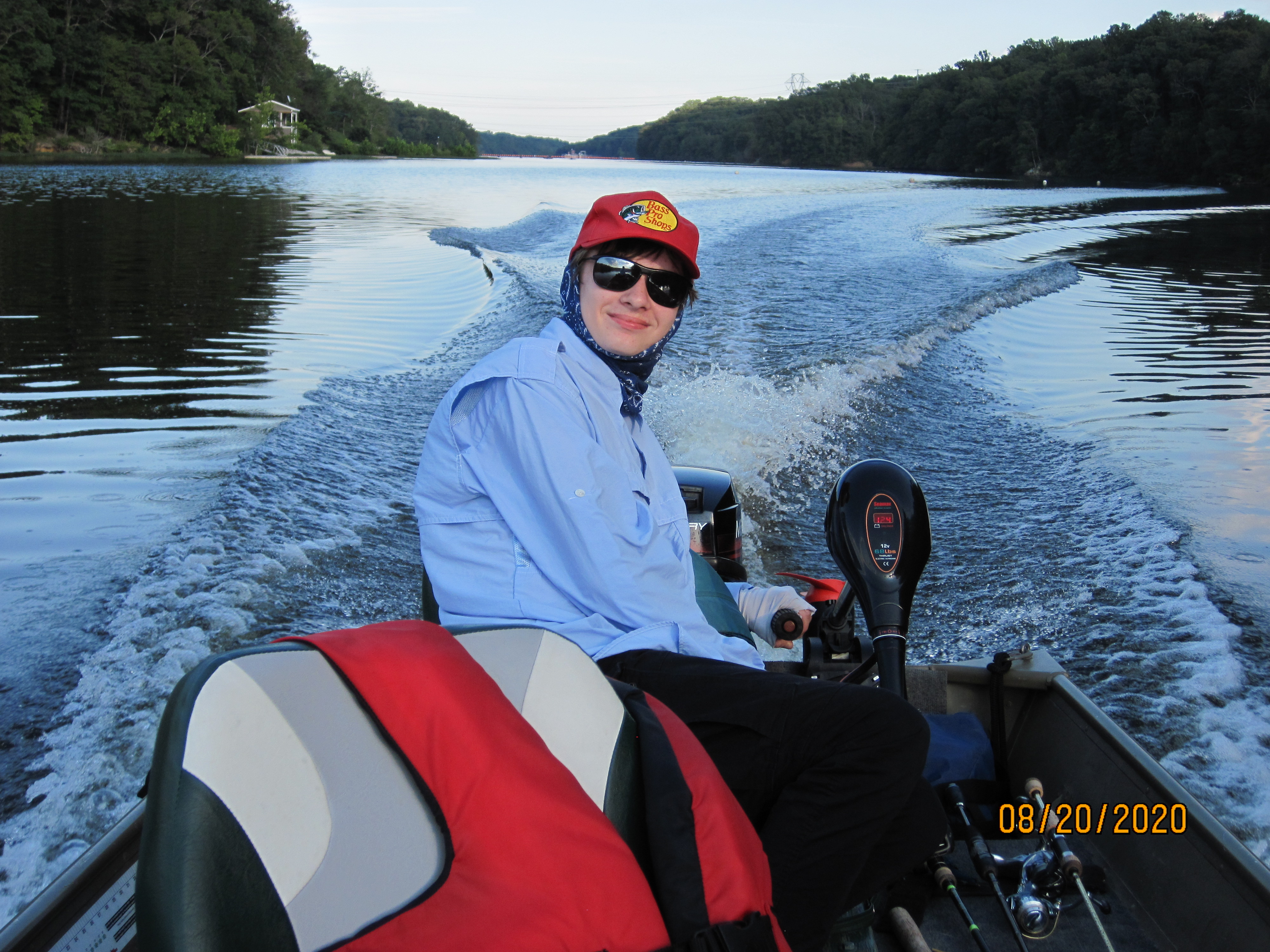 It was a nice afternoon and I always enjoy taking him out.  We saw Ospreys feeding, a huge snapping turtle and a few schools of shad.  We were off the water before 7 pm and I treated him to a couple slices from Tony's on the way home.

That's what it's all about!

Must have been fun pulling in that catfish on 4# test

Any idea what kind of kitty that was? Hard to tell with the pics.

I think a channel.  Not a flathead.