I got out for a solo trip with the river rising to 4 feet at POR and air temps forecasted to be in the upper 50's.  I was on the water about 8:30am with the heavy fog just starting to lift.  Water temps started just about 41 degrees and rose to about 45 during the day.  Water color was green and almost clear to a brown stain on the MD side.  I started working Ernie's island, but no takers.  I ran up to the island/rocks and worked a jointed fluke on a SWM head and a tube, but nothing bit there.  Water was a brownish green there.

I went up to Goose Creek and tried the mouth with the same lures, but nada.  The creek was a little clearer (green stain) and water temp was around 44 degrees.  I worked different lures and ate my lunch there.  After working the shoreline, I put a Lucky Craft 65 SP jerkbait in clown color on and casted it around.  I decided to throw toward the middle and was surprised when I hooked a smallie on that first cast.  I got it in and it was hooked in the tongue and bleeding.  I measured it at 16 inches and took a quick couple pics before releasing it.  It stopped bleeding after I dipped it in the water and swam off strong. 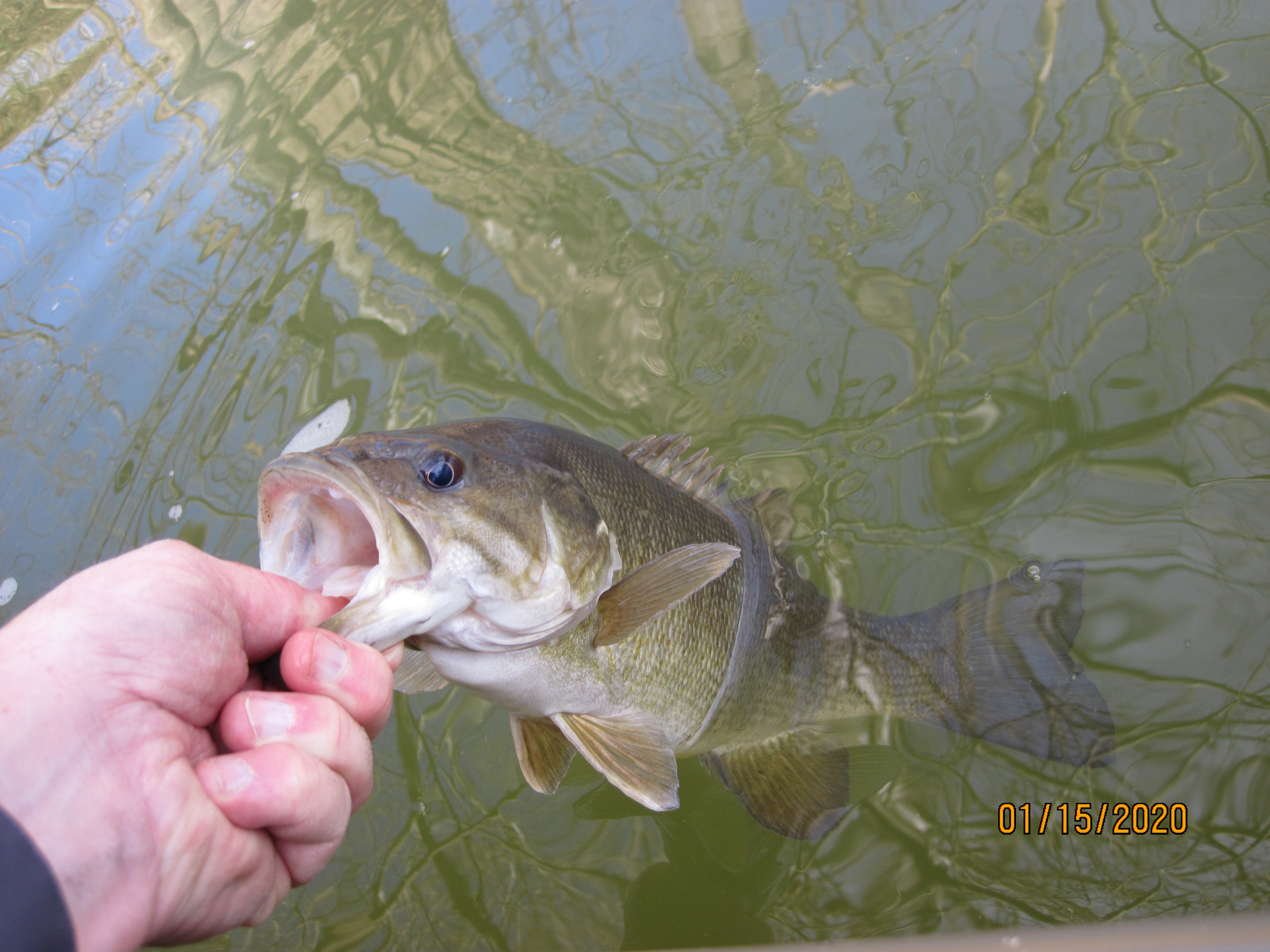 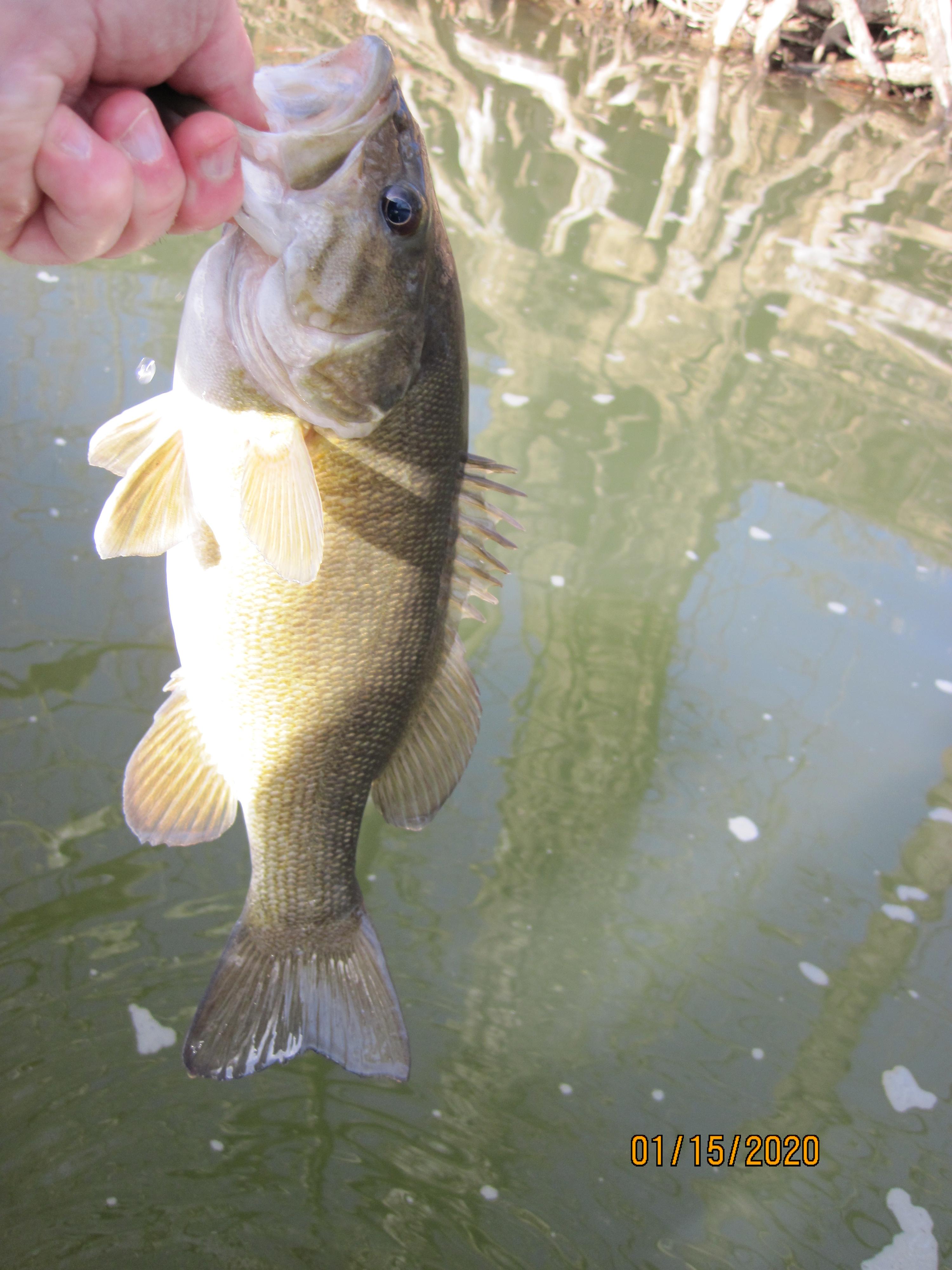 I was surprised and happy to get the skunk out after fishing hard all morning.  I fished the creek a while more, but did not get any more bites.  I did see an otter swimming upstream with a fish in it's mouth, which was pretty cool.

It was getting to be around 3pm, so I left the creek and tried some stone/rock structures on the MD side.  It had gotten the sun all day and I was hoping some fish would be there even though the water was brown on that side.  I was throwing a red Exude tube from a pack I have had for years.  About the 4th or 5th cast, I got a bite and  landed a chunky 16" smallie. 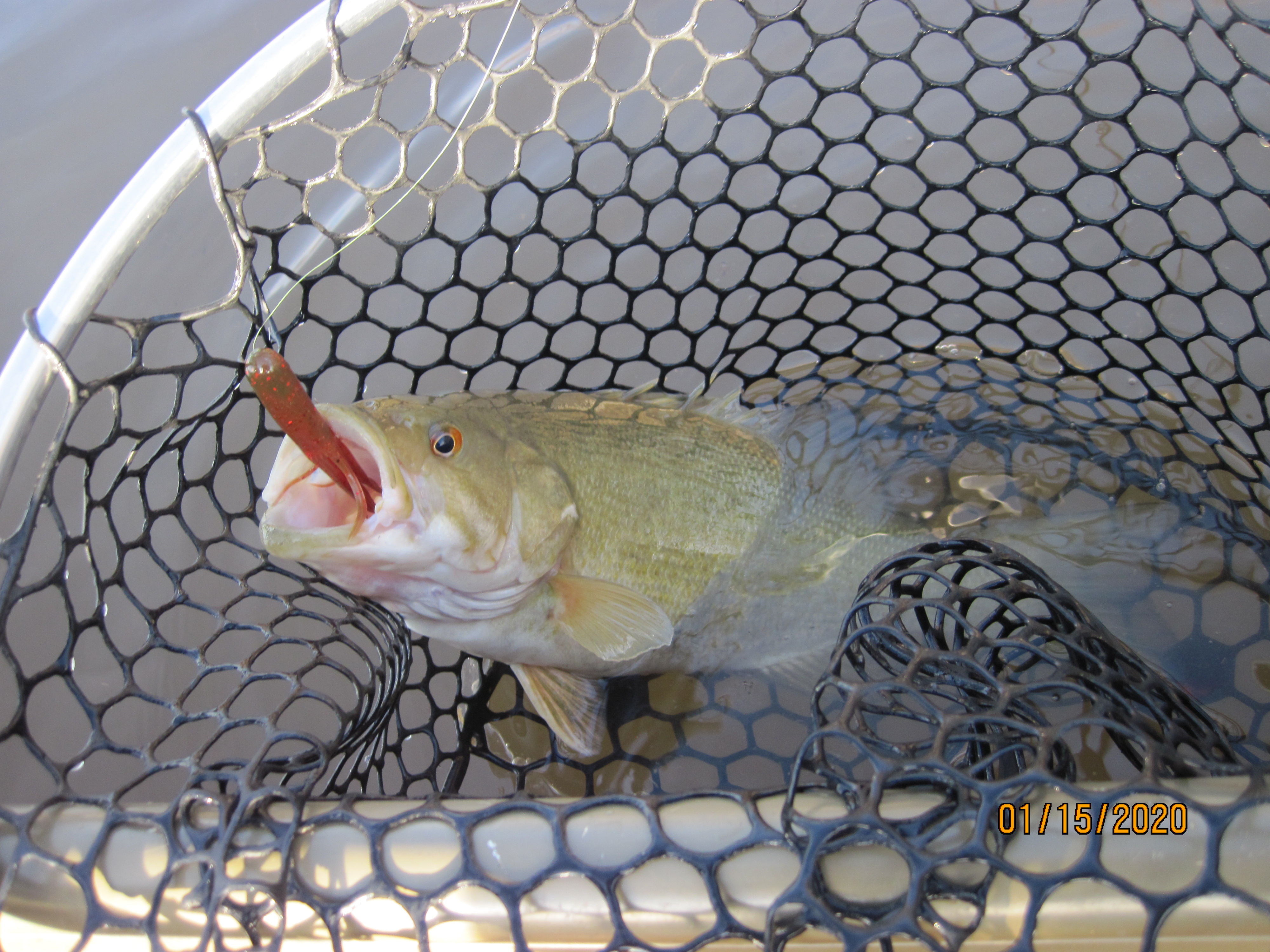 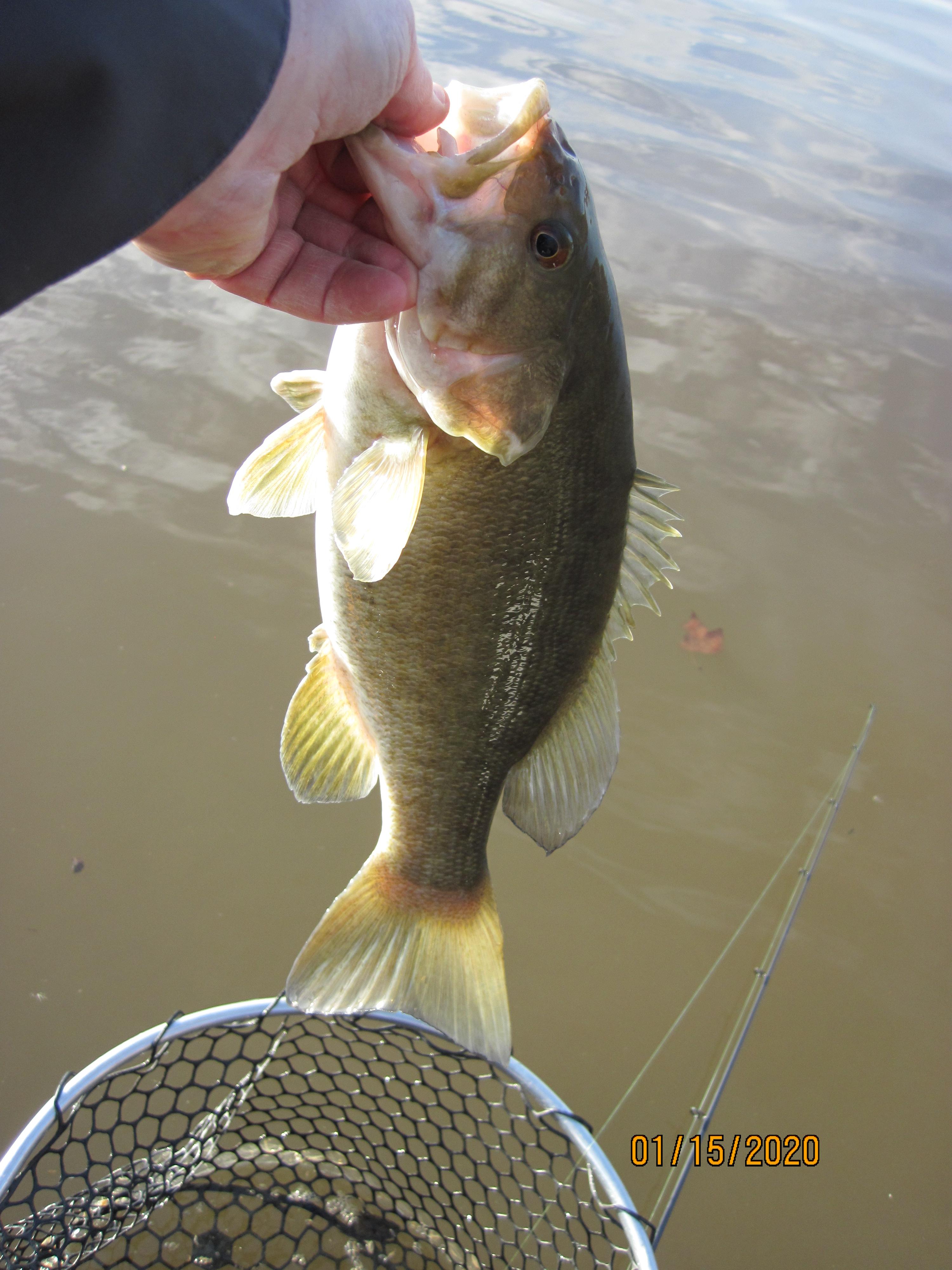 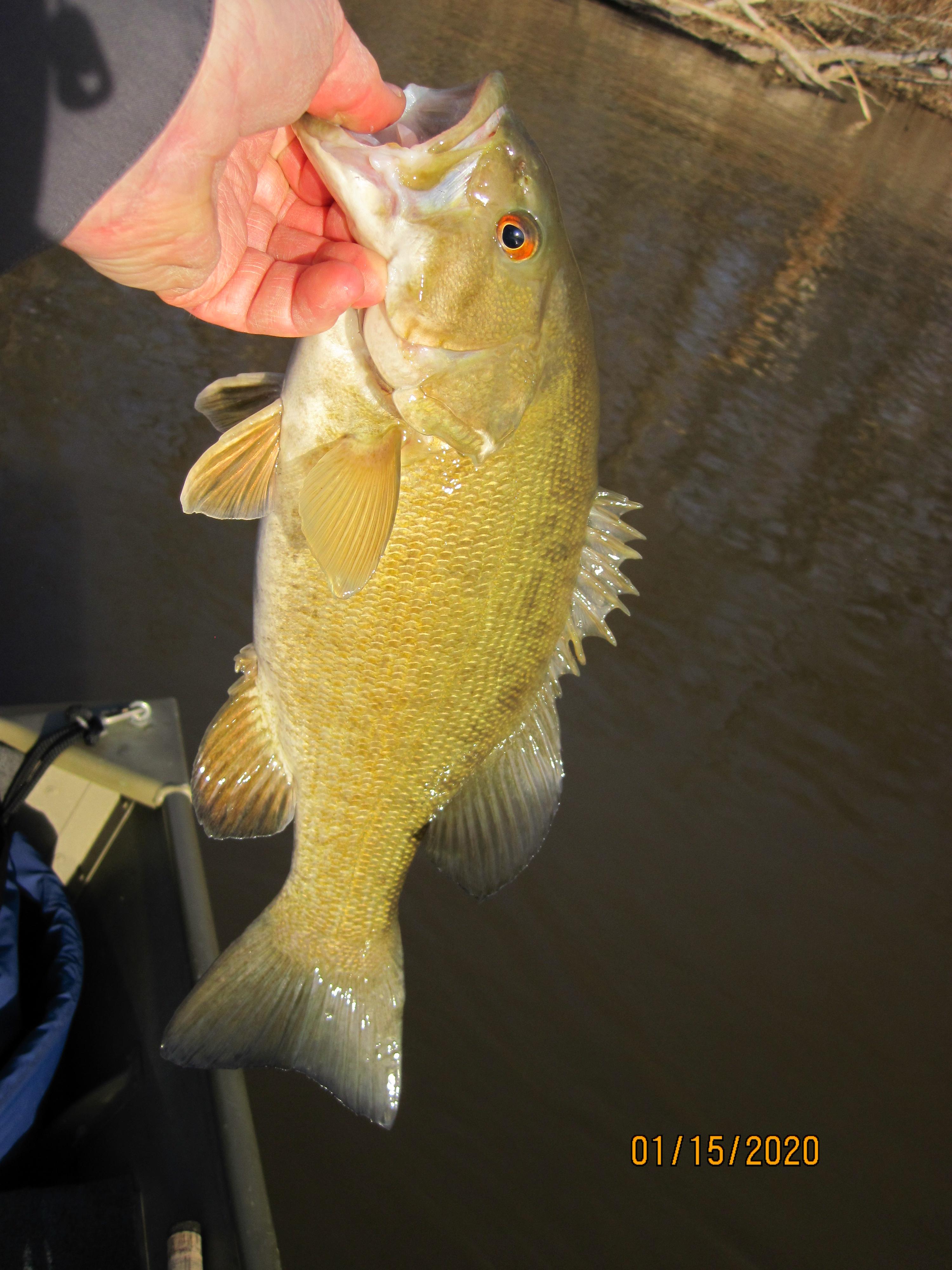 It was very healthy and well fed.  I fished the tube some more, but did not get any bites.  After a quick stop by the rocks on the way back, I saw it was getting late and made the ride back by about 4:40pm.

Nice day on the water, but the bite was challenging.  I will take it for January!  Now for another cold spell, so who knows when I will get out again.

When I was packing the boat up, I saw a guy who was flying a drone when I launched.  He gave me the link to a video he took of me taking off up river.  Pretty cool!
https://www.instagram.com/p/B7WUKhjFkJM … yl3nd6fgc6

A couple of nice ones! Most people didn't catch any because they were not out. Like Mr. Gretzy said, You miss 100% percent of the shots you don't take.

I liked the video and the music. Reminds me of my favorite relaxing (and hypnotic) song... https://www.youtube.com/watch?v=hg4FvOi-N18

Nice fish! Maybe you should get a drone and get into the youtube business too!

YouTube is killing itself now.  Guys who started a couple years ago have done well.

A red tube? That is a bait I would never think to use! Good on you for thinking of it and catching on it.

Great job. That river can be tough in the winter. Nice to see you guys getting fish.