Our annual blackfish trip out of Ocean City, MD scheduled for Monday was looking like it wasnt going to happen. Gale force winds Saturday night into Sunday night and a slow lay down was making Monday look like a blowout. Miraculously, all 6 of us, as well as the captain and mate were free on Tuesday, possibly the only day the boat would get out this week. This is one of my favorite trips of the year. We started this 5 years ago with my friend Chuck and his friend Rich. In addition to one of Richs friends it now includes Captain Danny from the Double D out of Montauk NY and Captain Chris from the Celtic Quest on Long Island, both great tog captains in their own right, all fishing with one of the best tog captains on the coast, Captain Kane on the Fish Bound.

Ocean City is a ghost town in the winter and hotel rooms are super cheap. We all got in Monday night for dinner and drinks. We headed to our favorite restaurant The Shark on the Harbor. Much to our surprise, it was packed on a Monday night. Half price drinks and entrees will do that. All they had available was an upstairs loft set up like a living room with couches, chairs, coffee tables and TV trays. It turned out to be awesome. We had the whole area to ourselves and had lots of laughs and dinner and drinks were great.

The next morning we were off the dock by 6 am sharp. The ride out was calm and beautiful. 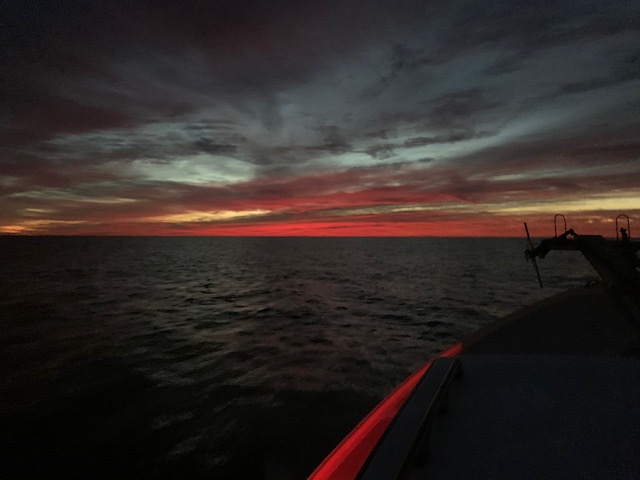 As nice as the weather was, the conditions were quite tough. It was a fairly light wind with a decent cross current and staying on a piece of bottom was challenging. On top of that the fish werent chewing aggressively. The captain had to adjust and reposition the boat frequently and even pick up and redrop anchors a couple of times before the tide change. The afternoon the wind picked up and the current shifted making it easier. On one of the resets, we had some visitors come by and say hi. 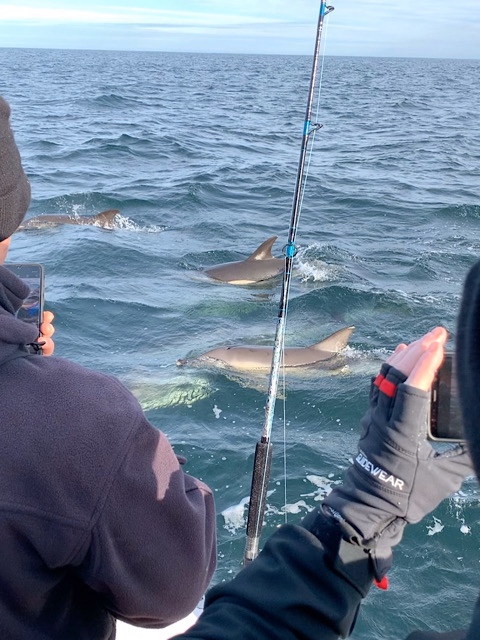 In spite of the tough conditions and having to be patient for bites, we were getting a slow but steady pick of fish and the quality was really good. After the tide change in the afternoon we had a few flurries and were even able to fish jigs on spinning rods late in the day. Its the hot new way to fish for blackfish, really effective and lots of fun. In the morning we saw plenty of fish in the 3 to 7 pound range that helped us get our limit for the day. A few hours in I watched captain Dannys rod double over and pull him to the gunnel.  He brought to net the big fish of the day that weighed in at 14 lb. After a quick weight and photo it was released to swim again. 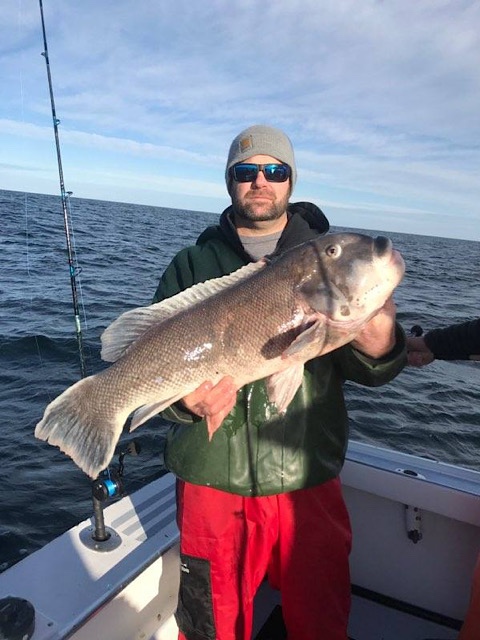 All told we caught a limit of eating fish, 5 fish over 10 pounds and a bunch in the 5 to just under 10 pound range and released keepers above our limit. Simply amazing quality fish. All of the double digit fish were released. We didnt even take pictures of fish under 10 lb. Normally an 8 to 10 lb blackfish is picture worthy, but not yesterday. I had several in the 7 to 9 lb range, most of which were released.

Captain Chris with his beast. 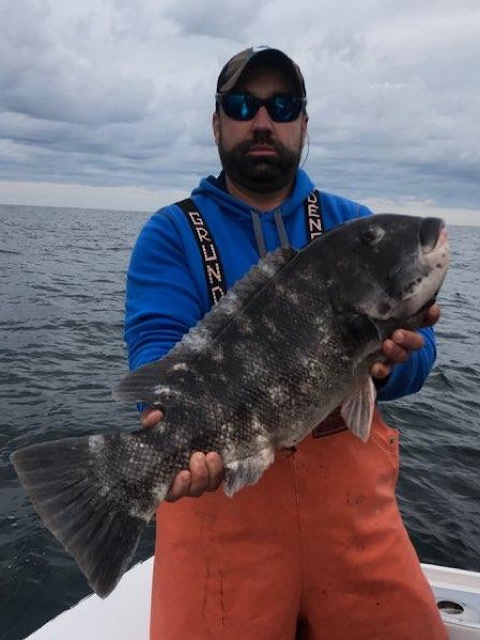 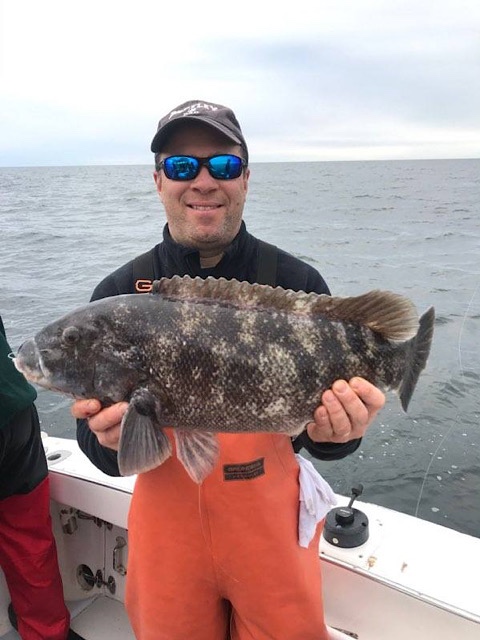 Heres me with the 2nd biggest of my life at 12.5 lb and my biggest caught on a jig. You can see the jig and the light but strong spinning rod in the 2nd pic. 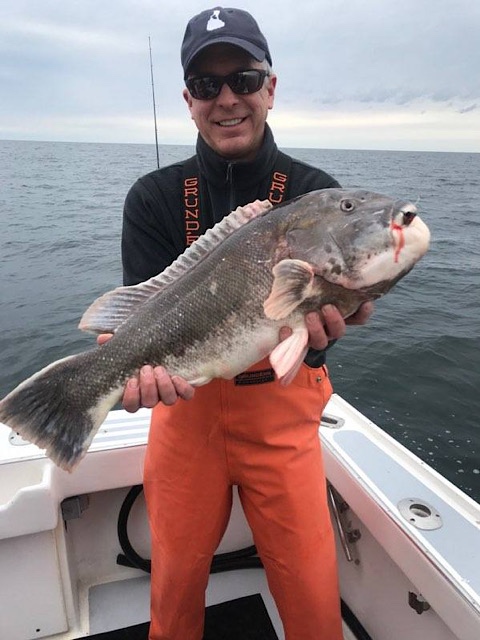 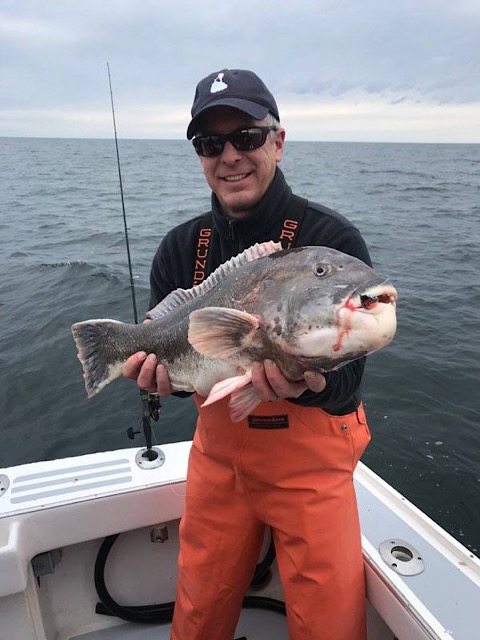 The days haul of keepers. 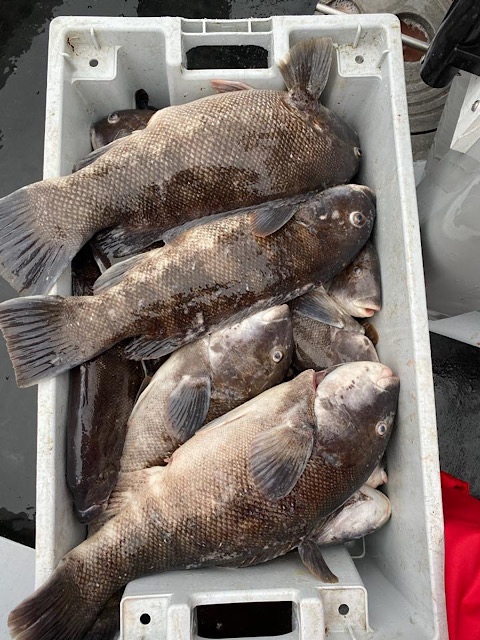 We are already booked for next year!

Quality tog fishin' for sure...and they are TASTY!!!