I had to be in Salt Lake City for a meeting this past week with a coworker of mine from Denver who is also a trout fisherman. While planning for the meeting I suggested we pack our fly gear and hit the Provo river while in town, since he visits there fairly often and has knowledge of the area. When he agreed I was excited for my end of year travel. I was able to pack everything I needed including boots, waders and warm clothes into a large suitcase except for my 10.5 ft nymphing rod. That became carry on gear. 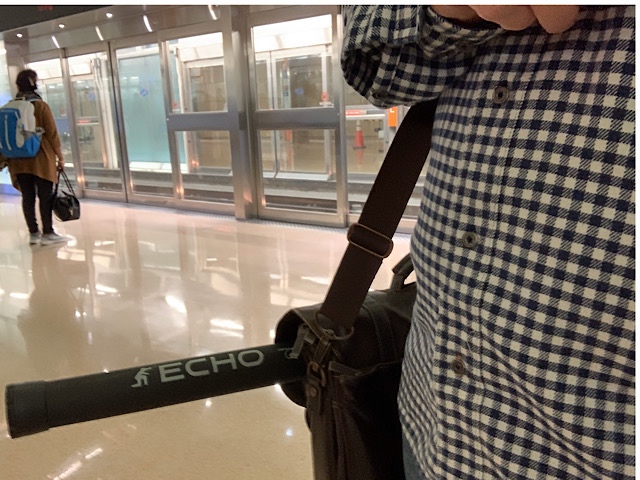 I flew into SLC Tuesday afternoon to a beautiful view and still enough time to get to the river for an hour or so before dark. 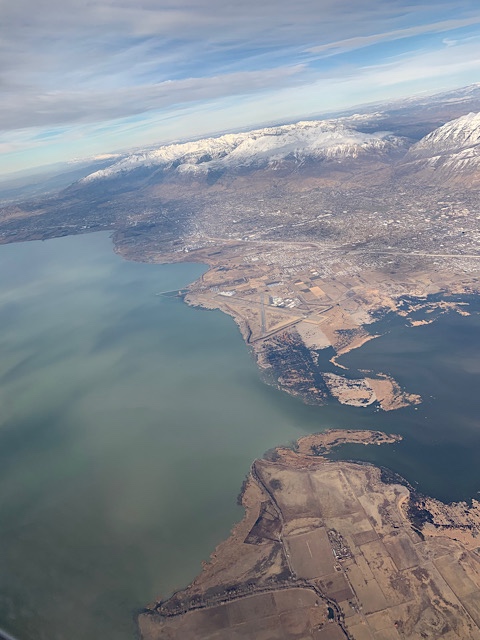 It took me longer than expected to get my car, dodge a little traffic and get to the river so i had less than an hour to fish. The access was easy and the river a medium sized manageable piece of water. My buddy had gotten in early and had 5 or 6 fish before I arrived. It took me a while to rigged up and get my head transitioned from travel to fishing. I missed one small brown and then just before dark hooked and landed this Rocky Mountain Bonefish, aka whitefish. 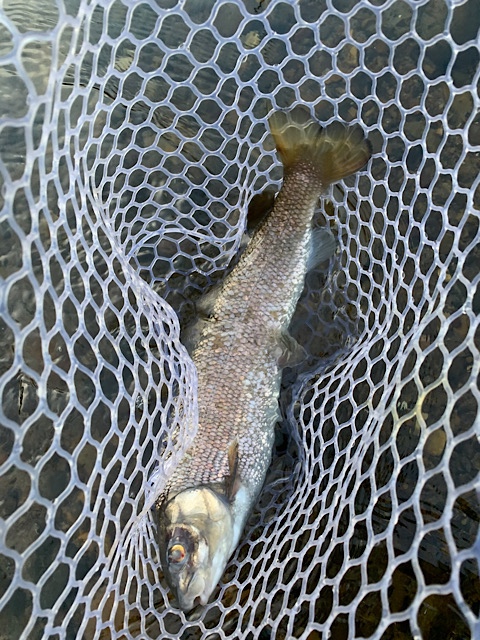 My buddy landed one more trout and that was it for the night. The next day after our meeting, I had the whole afternoon to hit the water properly. My buddy got called into another meeting so I was on my own. I stopped into a fly shop owned by guys i follow on YouTube and the owner was super helpful sending me in the right direction. I found that buying some flies, and in this case a map of the river too, really does a lot to get some local knowledge. I fished some beautiful water in both the Lower Provo and Middle Provo sections. 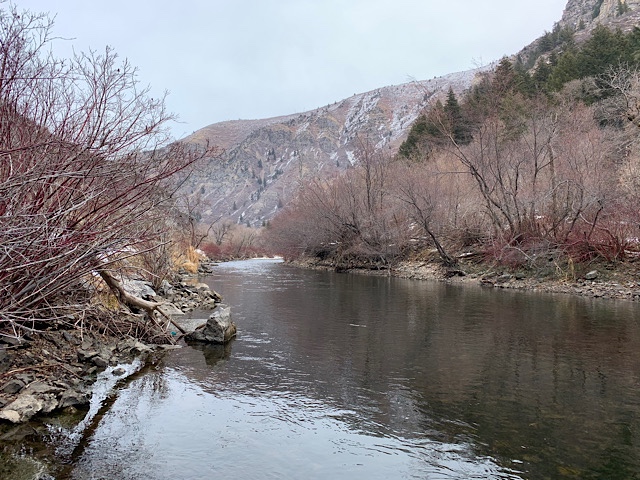 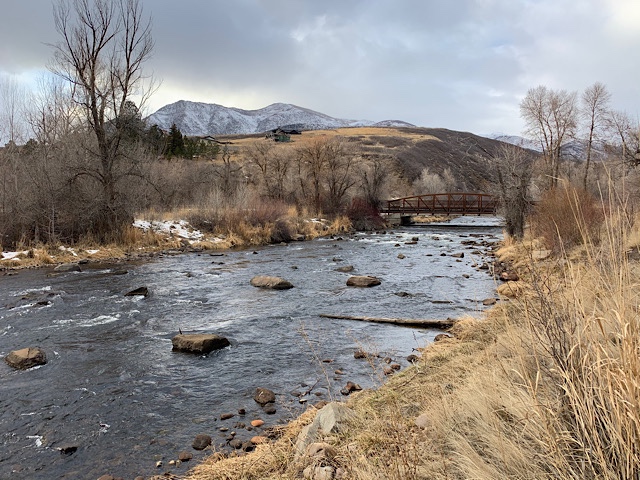 In spite of having a 20 minute period of rising fish, I was unable to get bites most of the afternoon. I did have one hit on the lower section but no hookup. About 3:00 pm I headed up to the middle section and was back on the water by 3:20. I saw 2 guys fishing deeper slower pools, swinging wet flies and they were catching a few small fish. They both said it was slow until about 2:00 pm. I played around looking at various runs and finally managed a nicely colored brown trout. 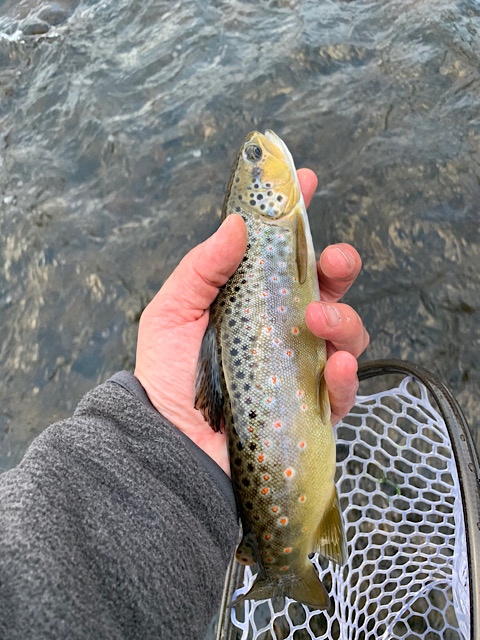 While I only caught one trout and one whitefish, I was happy to get some fishing in and explore a new part of the country. Thursday was to be a travel day home and I had to fly through Denver. As luck would have it, my flight from Denver to Dulles was delayed. It kept delaying later and later. In the fear that it might cancel, I looked at my schedule for Friday, rearranged a few calls and meetings and booked a flight home Friday evening. I quickly made some calls and found that the guide I used back in June was available so I would get to fish the South Platte River again.

It was a beautiful day in Pike National Forrest. As I was traveling to the fly shop the bright sunrise had me hopeful. The drive into the Forrest was scenic too. 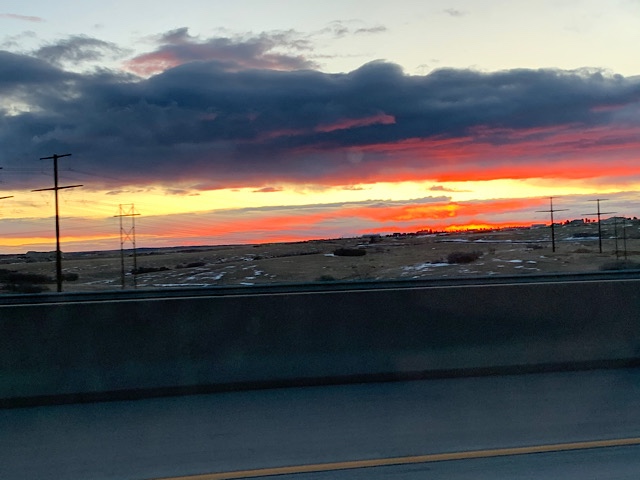 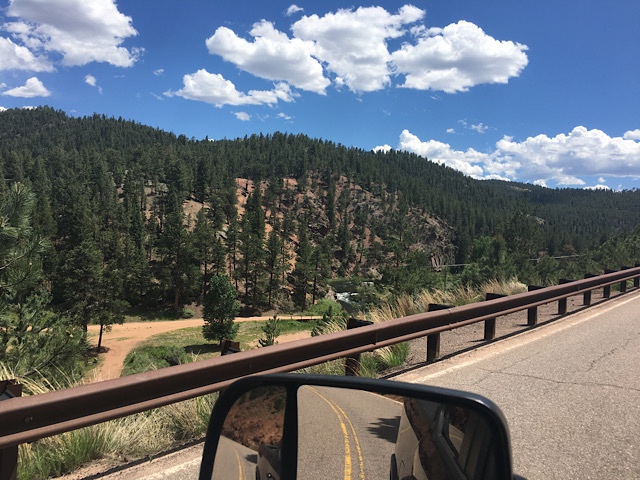 I met my guide Austin at the South Platte Fly Shop and out of cell coverage and into heaven we went. Amazingly, on a cold Friday at 10:00 am there were quite a few anglers out on the water. Our 3rd spot was a charm and open to fish. Austin is amazing at spotting feeding fish. We tried to get several to eat along with blindly fishing water but not a hit. We bounced around to several more spots and talked to other anglers and no one caught a fish. Finally at about 12:20 Austin spots another feeding fish. We worked him for at least 20 minutes from different angles, different methods and different flies. We finally got the fish to eat and it took off for the middle of the river and came unbuttoned. It straightened out a size 22 fly. A little while later I hooked up again and landed this beautiful fish. 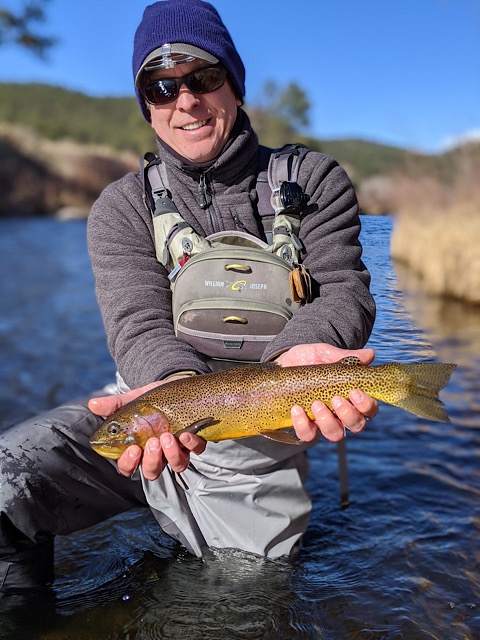 The odd thing about this fish is we were not sure what species if was.  We originally thought it was a cutbow but didnt have the cutthroat markings. We proceeded to have some action in the last hour and landed a few rainbows and a nice brown. 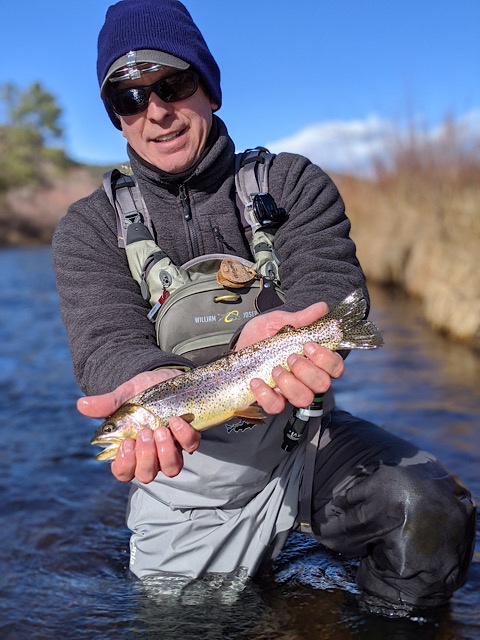 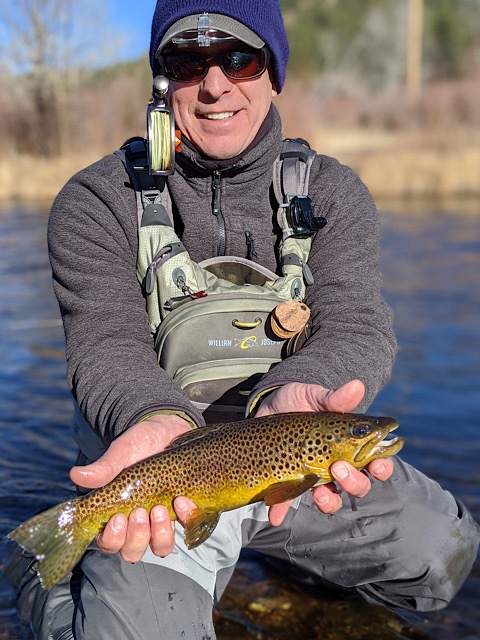 In spite of some tough fishing in Utah and leaving it late in Colorado, this was one of the most fun business trips Ive had in a long time and more great memories and experience fly fishing for trout.

Very nice but it looks chilly!

I do miss those work related fishing trips though....

Way to get the most from your business trip.  Beautiful scenery and nice fish!

Very nice but it looks chilly!

It actually wasn't bad. Colorado was colder than Utah that day but with such low humidity and a bright sun, it was quite comfortable. I was sweating when we hiked into our 2nd spot.

Way to get the most from your business trip.  Beautiful scenery and nice fish!

It was great. I really need to try and do more of that. It's usually airport, conference room, dinner, hotel and return. I travel to some great places and checking the bag full of fishing gear wasn't that bad. Now only if I could find a contact center in Montana that needs a visit...

Nice trip - no issues packing hooks and sharp objects in the checked bag?

Nice trip - no issues packing hooks and sharp objects in the checked bag?

None whatsoever. Ive even stopped at Bass Pro on the way home on another trip and bought larger hooks than are on flies and had them in my carry on bag without a problem.