We splashed the boat and inched our way to the 1st spot. 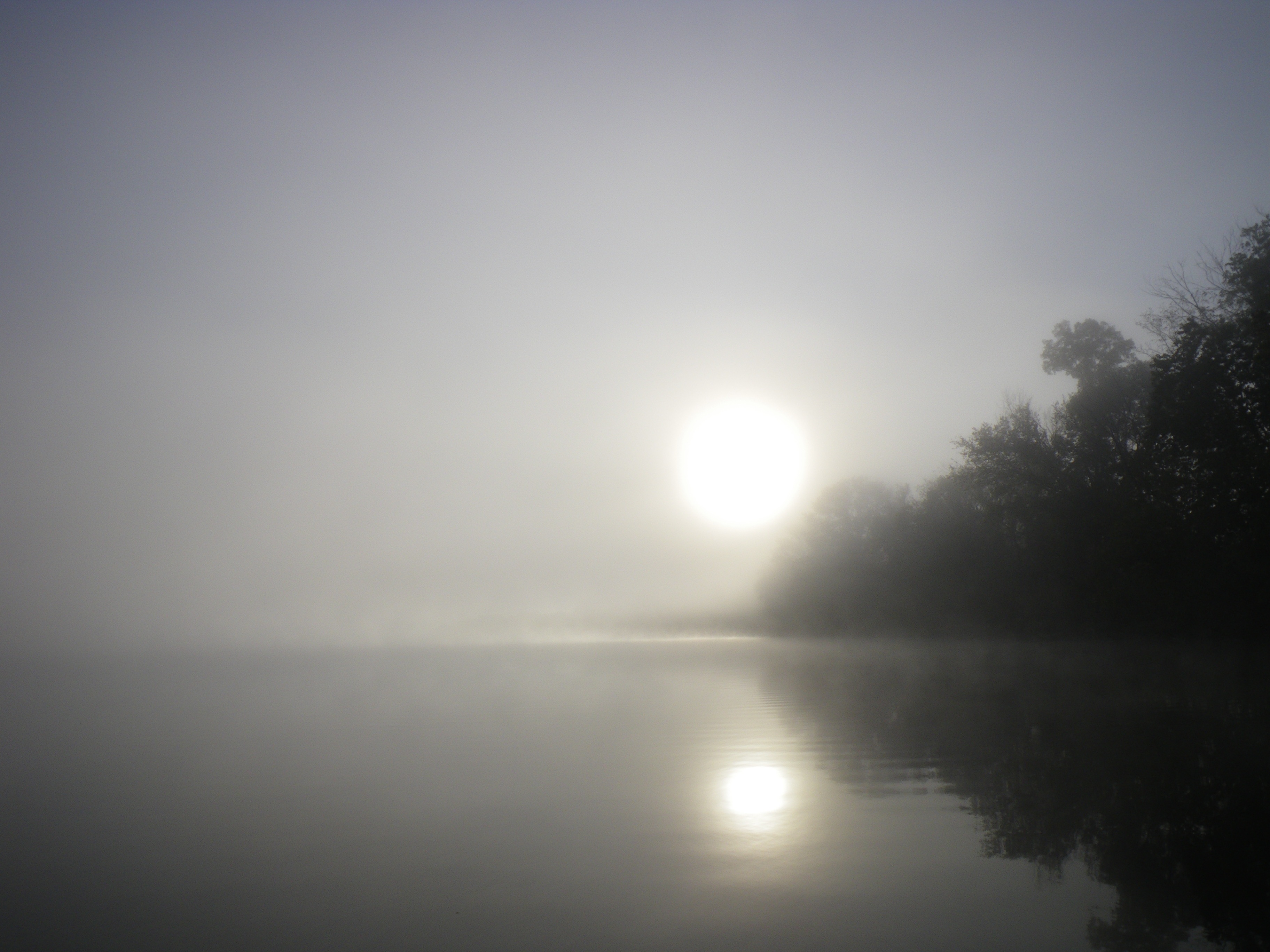 Even though I was following my tracks from Friday, there was no way I was going to run and find a rouge rock...which are plentiful.

We tried to find John's walleye but could not locate him but we stayed there until the fog lifted. It took over an hour before the sun came through. Once it did, we ran up to the big ledges just below Goose Creek.

While drifting, my bait got sucked up and it was game on! I started saying the same things John did on Friday. "World record smallie...nah, it must be a catfish. Maybe it's a carp."

All I know is that line was peeling and then...poof...he got off and I just stood there. Lost chance again!

We were surprised that we did not get another bite around these ledges. They are impressive.

We floated down a bit more to one of our favorite places and it was like a whole new place! 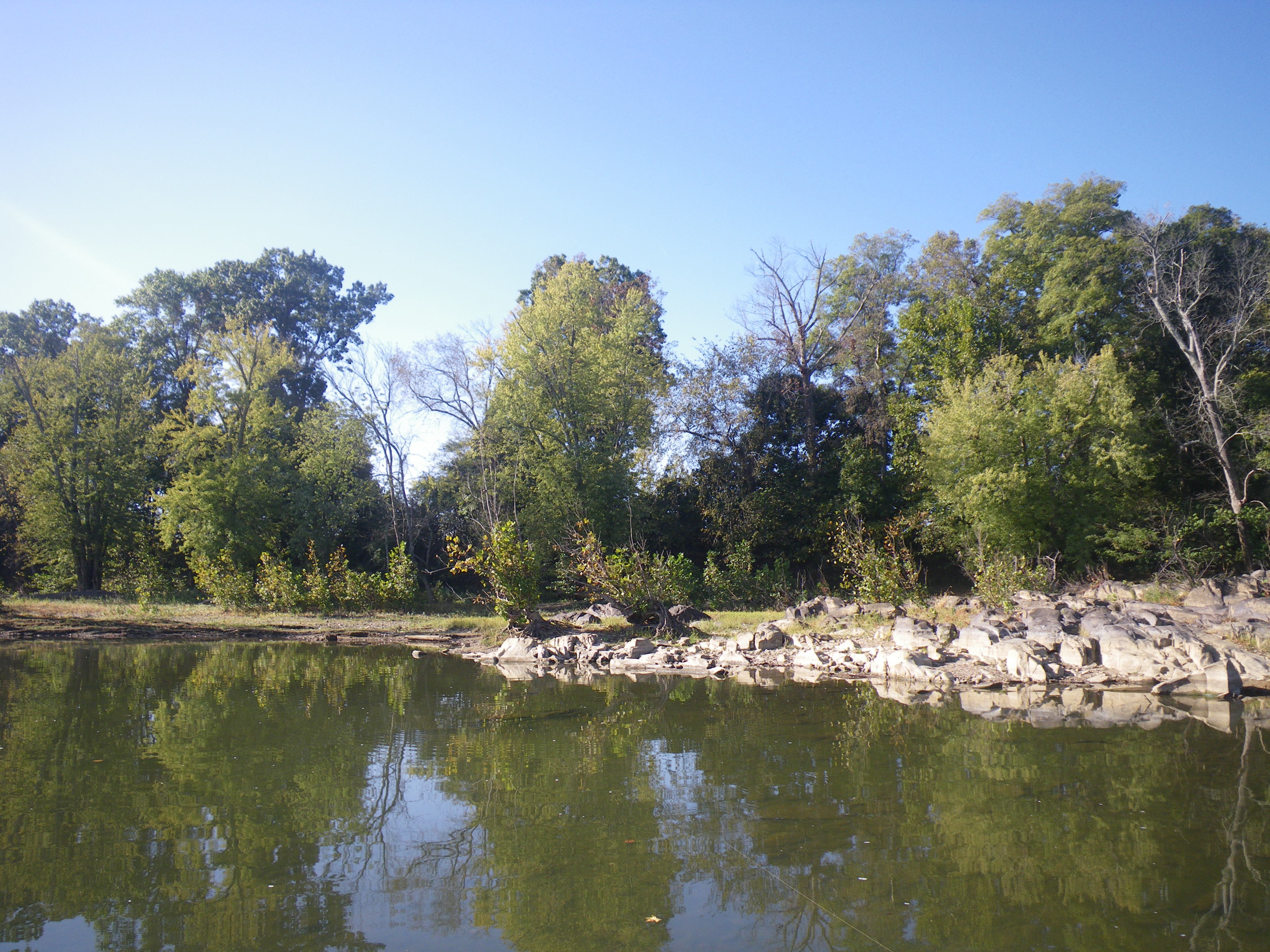 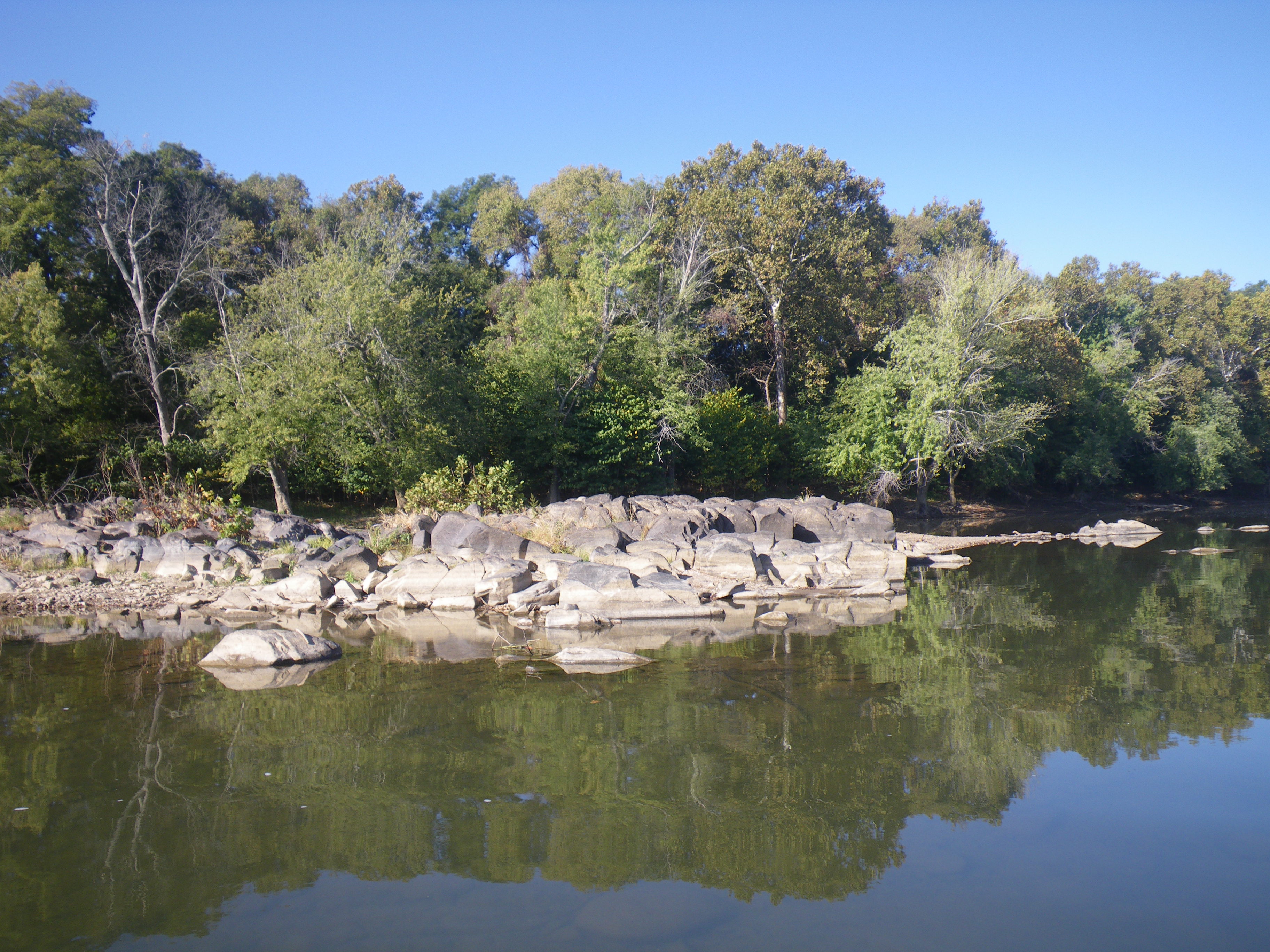 We did basically the same drift as we did on Friday but there was little to no love. Maybe 2 teeny bites.

I then decided to hit the shoreline hoping there was some water there. There was and shortly after we got there, Bob threw in a shaded area near a log and a very nice 17" smallie came a chasin'! Bob nailed him! 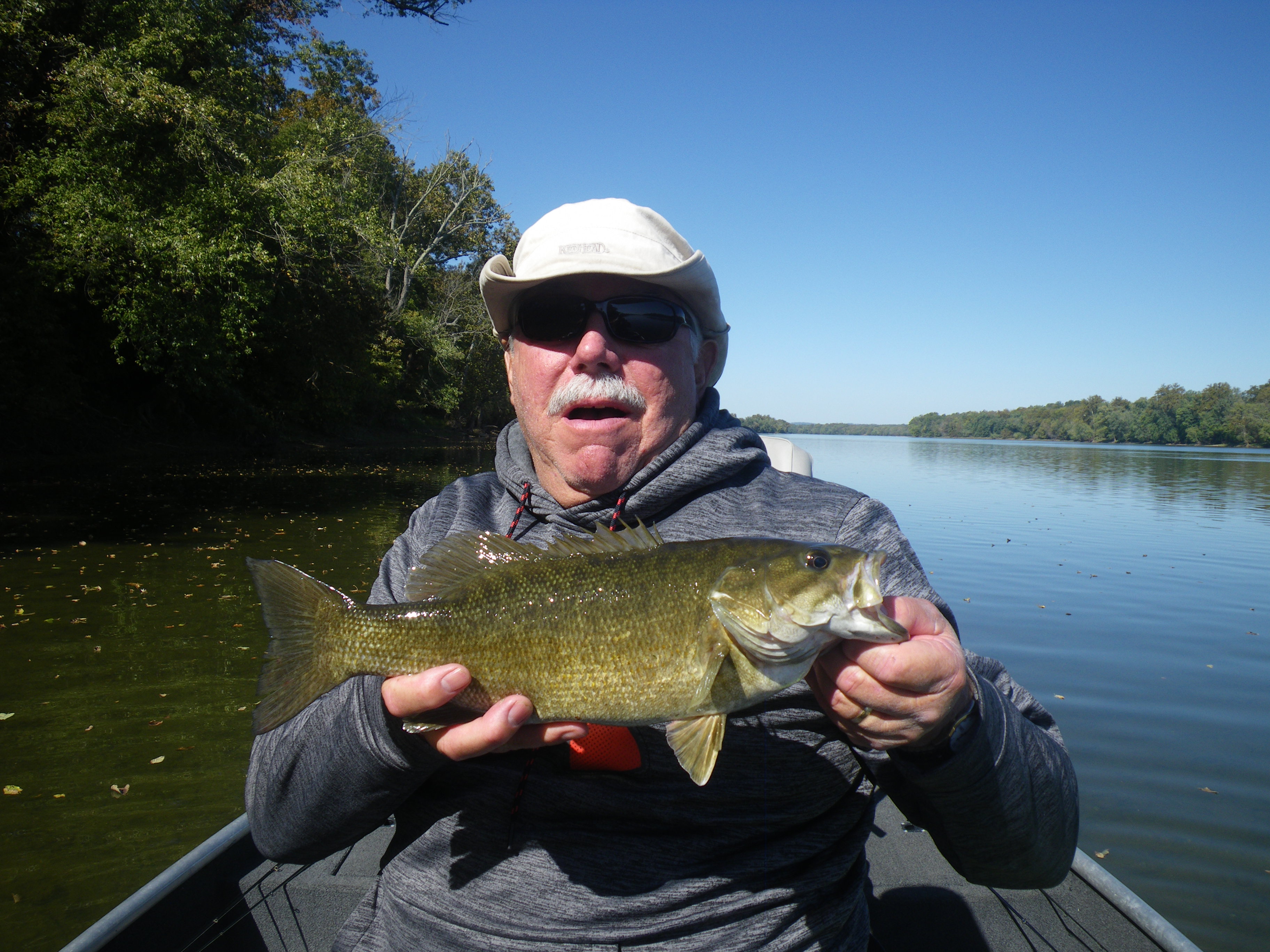 A little later, we spot a rock on our other side and Bob makes a nice toss and hooks a nice and plump 13.5"er! 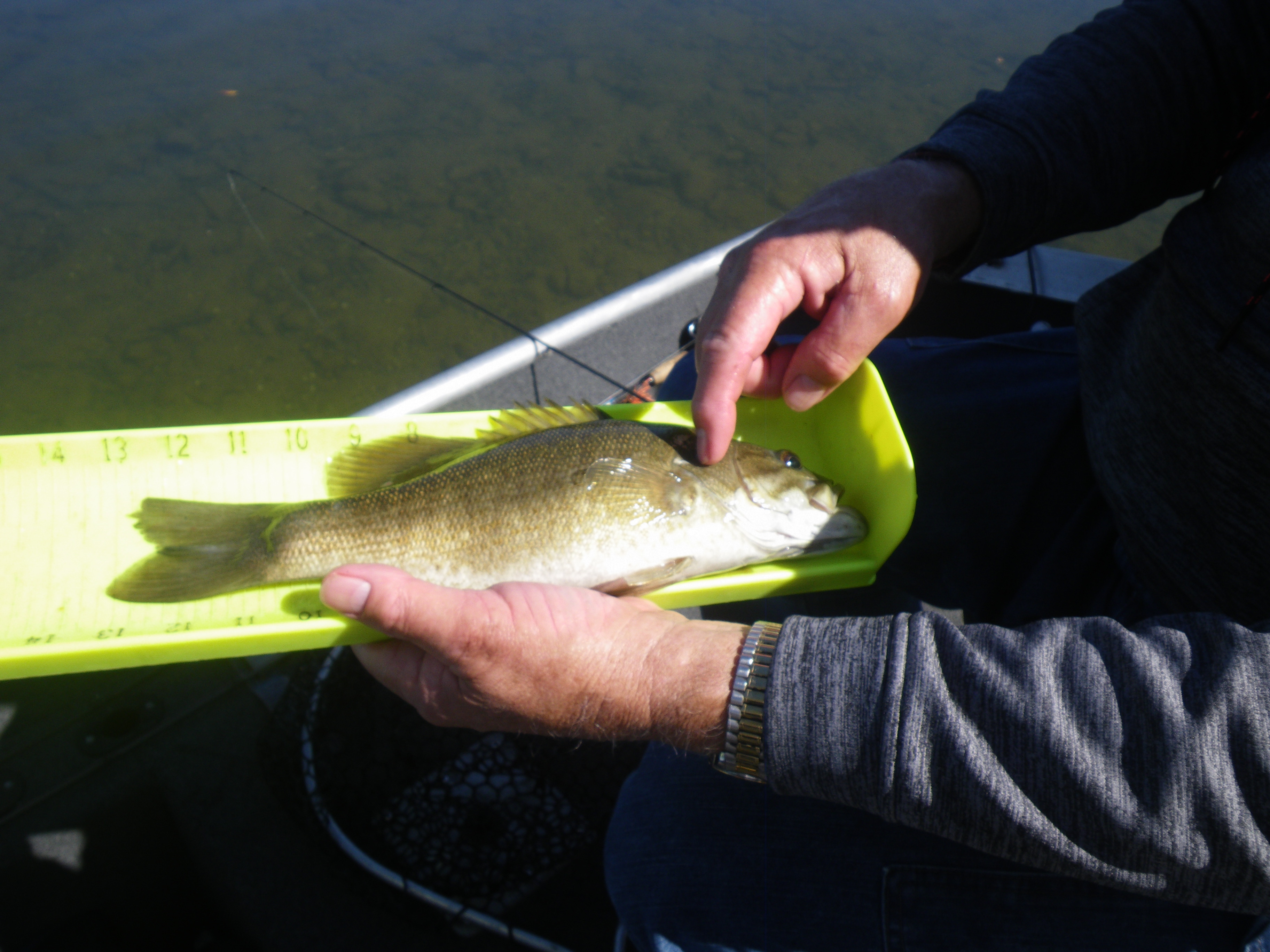 Not only that, he came with a partner that was trying to steal the bait. We were not able to catch the partner. After we floated by the rock, we saw a couple of carp and a couple of catfish just laying there out of the current.

Before we could get to the rock garden, it started getting skinny and I had to pull up both motors. We were stuck...not going anywhere. Thankfully, I have 2 paddles on board and after a little work, we were set free.

I then decided to go back to deeper water and I was finally able to get my skunk off with a decent 14"er! 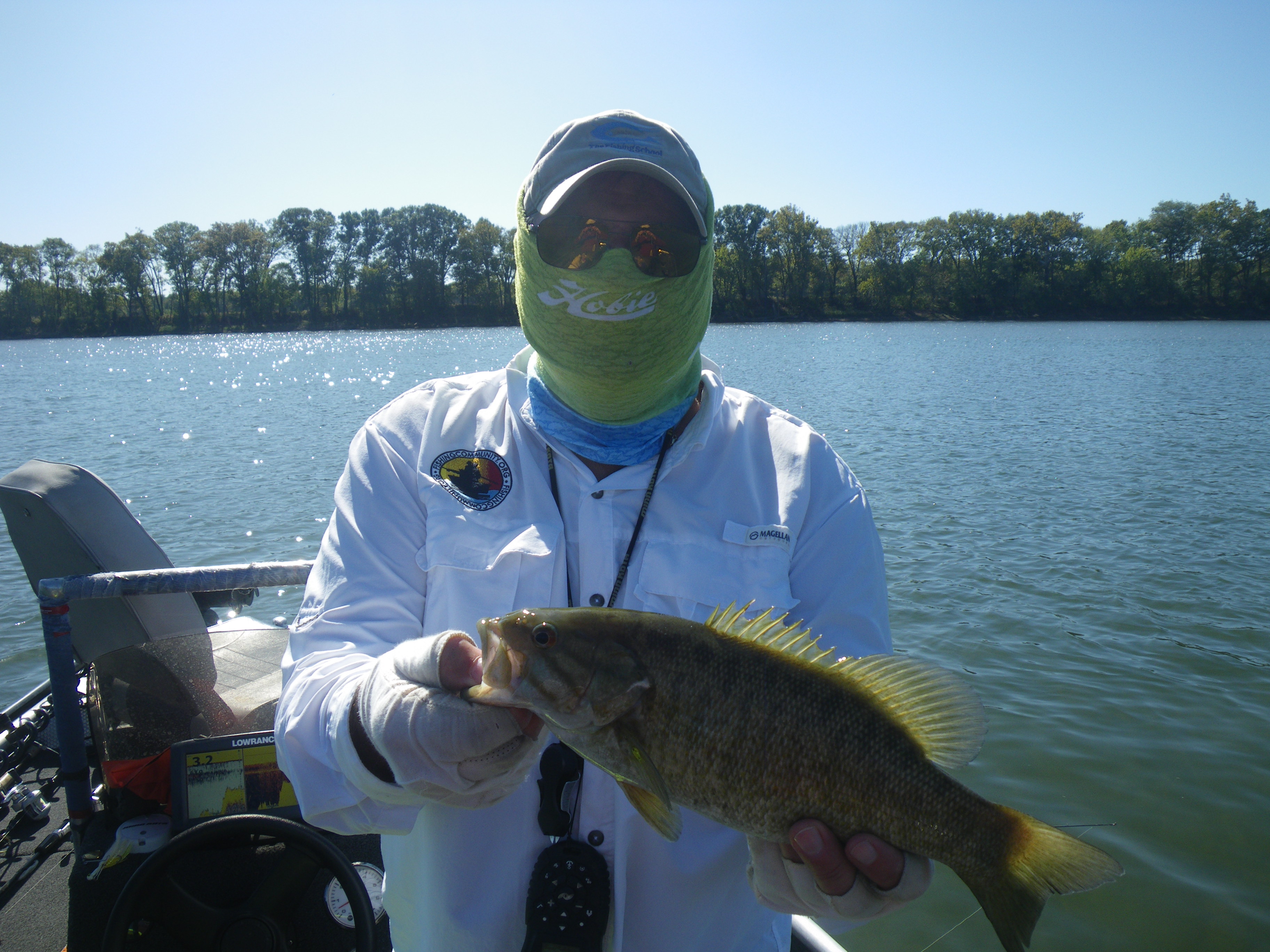 Why so covered up? Because my nose is still highly sensitive after the minor surgery last month (to remove a bad thing).

It was now past 2p so we tried an other area to no avail. Bob did get a bite or two.

I will say this. The water is clear, the water is low but there are some nice holes to be found. Further, if you don't pay attention while running (less than 1/2 speed than normal), you will bump a rock or 5. I know!

Beautiful day out but still concerned about the lack of fish.

I do have a question. I saw many fish near the shore that looked like yellow perch. They had vertical bands. Most were blue gill size but longer vs taller. Later, I saw some bigger ones, certainly aroundb10-12 inches. What are they?

Nice job catching a few.  Nice fish, Bob!  Fish look healthy.  Not sure on the fish ID.  I will try my luck tomorrow.

Fish were plump. They are eating well. Would love to see what is in their stomachs but that ain't gonna happen!

I do have a question. I saw many fish near the shore that looked like yellow perch. They had vertical bands. Most were blue gill size but longer vs taller. Later, I saw some bigger ones, certainly aroundb10-12 inches. What are they?

They don't have vertical stripes....pretty sure now it's that creek chubsucker.